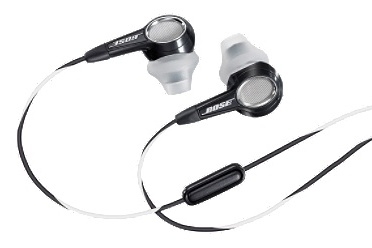 If you're after a replacement for your mediocre mobile phone headphones, then you could do worse than the Bose Mobile In-Ear Headset. Although predictably pricey, it offers outstanding bass, excellent sound quality and good looks.

Bose has a reputation for producing high quality headphones and it has now branched into the mobile space. The Bose Mobile In-Ear Headset is suitable for a range of mobile phones including the Apple iPhone. It produces outstanding bass and excellent sound quality, but doesn't have a strong seal and lets in more external noise than we liked.

Though described as in-ear headphones by Bose, the headset doesn’t sit as deep in the ear canal as in-ear monitors (IEMs). While this makes the earbuds more comfortable, it means the seal with your eardrum isn't as significant as with most IEMs — so more external noise is let in. For example, we could hear our keystrokes while typing this review and using the Bose Mobile In-Ear Headset at the same time (whoever said men can't multitask has clearly not taken a trip to the GoodGearGuide office!) Bose includes small, medium and large silicon tips in the sales package and they are easy to replace.

Overall sound quality is impressive, but it's bass that's the real star of the show. It is the most powerful of any portable headphones we've reviewed, without massively overpowering other elements of the music. The bass-heavy nature won't suit all listeners and will probably turn off most audiophiles — it's more suited to electronic and dance genres. The powerful bass slightly overshadows the treble, which isn’t as prominent or punchy as expected, but mid-range is detailed.

The Bose Mobile In-Ear Headset also includes an inline microphone and answer button. Using an iPhone, you can press the button once to pause, twice to skip tracks forward and three times to reverse skip tracks. Unfortunately, the controls don't include volume buttons, so you'll still need to adjust this using the iPhone itself. Audio quality for phone calls isn't as impressive as music. Our callers didn't complain, but incoming audio isn’t completely clear and our callers often sounded distant.