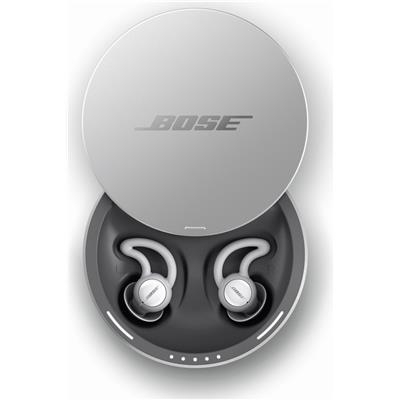 The Bose SleepBuds might be expensive and flawed but they are awfully likable.

Rather than promise the world in terms of audio fidelity and battery life, the Bose SleepBuds promise an audio experience that’ll put you to sleep. As such, it’s kinda difficult to review the Bose SleepBuds in the same way that you would most other set of wireless headphones.

The use-case here feels niche and bespoke, so the review probably needs to be as well.

Usefulness aside, the design of the Bose SleepBuds is pretty compelling to feast your eyes upon.

In fact, I’d go so far as to say that the physical form-factor here far outshines the previous Bose SoundSport Free true wireless earbuds. The SleepBuds come in a sleek, circular silver case that’s magnetically sealed when not in use. It's a little large to shove in your pocket but a fine fit if you need to toss it in your backpack. To open the case, you gently nudge the top of the case upwards - revealing the SleepBuds inside.

And setting up the Bose SleepBuds is a pretty painless process. You charge the buds, download the app and pair them with your phone. We did have to go through some setup prompts and software updates before we could properly use them, so it’s best to get everything out of the way long before you actually want to rely on the SleepBuds - since the software update part of the process can a while.

As with similar-looking true wireless earbuds like the AirPods and Galaxy Buds, the carry case for the Bose SleepBuds doubles as a portable charger. Each of the white tear-drop like earbuds inside the case packs a whopping 16-hours of usage. The case itself then contains another full charge, bringing the total usage time to about 32 hours. At a glance, this is well beyond most true wireless earbuds but there is a good reason why.

The Bose SleepBuds can’t really play music. And if you’re the kind of person who listens to podcasts or audiobooks before they sleep, you’re going to be out of luck here as well. You’re only really able to use the SleepBuds to listen to a dozen or so different white noise tracks that Bose have preloaded onto the earbuds. There are additional tracks that you can download via the Bose Sleep app but it’s fairly limited and you can’t upload your own custom content easily.

This situation isn’t helped by the fact that the act of charging the SleepBuds can itself be more than a little finicky. While the charger case for the SleepBuds is much better than a lot of basic true wireless cases in terms of built quality and material design, I did frequently encounter issues with it in that the earbuds wouldn’t always correctly align and charge properly.

Did the Bose SleepBuds improve my sleep?

Honestly, this one is really hard to answer. I’ve had nights wearing the SleepBuds where I’ve barely slept at all. I’ve had nights where they’ve seemingly-helped as well but it’s so difficult to say one way or another, let alone whether make a call as to whether they’d help others in the same way.

I came to reviewing this product with the hope that It’d help me improve my sleep but the thing that I came away learning was that I’m terrible at getting a good night’s sleep. Like, truly, tremendously bad - and I’m not sure any amount of clever design and technical trickery can change that.

Where does that leave us?

Well, to start with, it leaves us with a set of ultra-lightweight earbuds that are generally comfortable to wear - even when you sleep wearing them. That’s not nothing. The SleepBuds are ergonomic as all get-out and they make for a snug fit that isolate you from a decent amount of outside noise - even if it’s nowhere near as good as full-blown noise-cancelling.

I wouldn’t recommend taking these on a plane over a set of Sony WH-1000X M3s any time soon. Still, if you’re the kind of person who’s already had success in improving their sleep through listening to white noise, these are a slick (if expensive) way to do exactly that - even if you are limited to Bose’s own library of audio samples.

As a product, the Bose SleepBuds are easy enough to like. But, as much as I like them, they’re tricky to outright recommend when their actual real-world utility can be so variable.

And it doesn’t help that there’s a bunch of stuff here that feels half-baked. The lack of any fast-charging is only the tip of the iceberg. Given Bose’s reputation, it feels flat-out silly that these earbuds don’t have proper noise cancelling in them.

Still, products like the Bose SleepBuds do suggest that the company is interested in taking their audio pedigrees to new spaces and form-factors. That’s genuinely really exciting to behold and it’s even more impressive that the first fruits of this investment in unconventional or specialised types of listening experiences are as good as they are.

The Bose SleepBuds might be expensive and flawed but they are awfully likable. Whether that’s enough to justify being an early adopter and whether they do make a difference when it comes to giving you a solid night’s rest is - by its nature - a harder distinction to divine.

You can find the Bose Sleepbuds through JB Hi-Fi, Amazon and the Bose store.