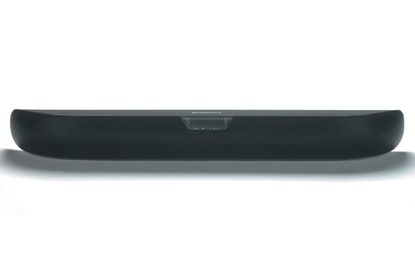 Bowers & Wilkins' Panorama soundbar is one of the best single-speaker home theatre systems on the market. Apart from its unnecessarily complicated setup, it's a great all-rounder with unparalleled sound quality in both our movie and music tests.

The Bowers and Wilkins Panorama is a home theatre soundbar with great audio quality and an exceedingly stylish design. Getting the best sound out of the device is tricky thanks to an unintuitive optimisation process and the lack of an on-screen display. However, if you have it set up correctly it will wipe the floor with its competitors.

As we've come to expect from the company responsible for products like the Zeppelin, the Bowers & Wilkins Panorama is extremely well built and very stylish. A shiny metallic finish on the soundbar's top and rear is offset by the long, thin speaker grill on the front, with a small display and set of controls on the centre. At just over 14kg the Panorama soundbar feels very well put built — it's solidly constructed out of heavy materials, in stark contrast to the comparatively cheap and plastic finish of the Samsung HT-BD8200.

Setting up the Bowers and Wilkins Panorama soundbar is a mixed bag. You can just plug it in and place it in front of your television and get good sound, but if you want to go through the process of equalising the Panorama to suit the room, things are not so easy. You are required to press a series of buttons on the remote to access the menu — this is an arduous process but at least it means you won't lose your settings accidentally. You can adjust the side-firing surround speakers to suit hard, medium and soft wall types, as well as set an optimal listening distance and compensate for input lag.

There's no HDMI, no Dolby TrueHD codec support and no analog 5.1 connectivity — you'll most likely be using one of the two optical digital outputs, but there's also coaxial digital and two stereo RCA inputs. If you desire more low frequency punch there's also an RCA pre-out to connect an external subwoofer such as the B&W PV1. Though the lack of HDMI in and out is slightly annoying it's hardly a deal-breaker.

The Panorama soundbar is a three channel system — two side-firing angled channels join a centre channel incorporating two 3.5in drivers and a 1in tweeter. The system's "subwoofers" (also 3.5in) are rear ported, so placement to allow bass reverberations is important. Once we went through the setup process we tested a range of music and movie audio to put the Bowers & Wilkins Panorama through its paces.

Popping on Gorillaz' Demon Days album through the analog inputs, we were initially surprised at the clarity the centre channel offered. Sitting directly in front of the speaker offers the best sound quality by far, with detailed and crisp treble that doesn't extend too far or become too harsh. The unit's low frequency extension is amazing — we really think that adding a subwoofer to this soundbar isn't necessary. There's great mid-bass which doesn't bloat or become boomy, and enough lower bass to give music and action movies a real kick.

We switched to Mission Impossible: III and The Dark Knight to see how the Panorama handled blockbuster sound — generally demanding and taxing on lower frequencies — and we remained impressed. The centre channel is superb for dialogue, delivering measured and even vocal timbres that were never unrealistic. The side-firing channels are accurate at simulating surround sound, and the system's Dolby Digital, PLII and DTS support means you have access to high quality surround sound.

Bowers & Wilkins' Panorama soundbar may be expensive — roughly twice the price of other companies' offerings — but we think it's worth the price. It's the best single-cabinet sound system we've heard this year, and its few small flaws are hardly important when stacked up against the superb sound it produces.