Control your media-centre software from your iPhone or iPod touch. 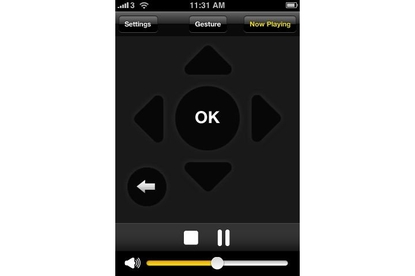 This app is a great way to control Boxee. There are still plenty of bugs, though, and a long way to go before it can be considered a great iPhone app.

Anyone who has attempted to get more out of their Apple TV by using third-party software would doubtless have heard of Boxee. The Mac OS- and Linux-compatible media centre application has quickly become a mainstay on home theatre PCs, Mac Minis and Apple TVs — and it hasn’t even gone into beta. Now the Boxee team has released an iPhone app that provides wireless control over the software.

The Boxee Remote app works in similar fashion to the Apple Remote iPhone app. Connecting the Boxee Remote app to a host device, however, is much simpler. The app simply searches for running Boxee installations on the wireless network and provides a choice of devices to connect to. The process is extremely simple but lacks any form of security, allowing anyone with the app to easily hook into your Boxee (providing they are connected to the same Wi-Fi network).

Once connected, Boxee Remote provides two forms of control. Buttons is a basic five-way navigation pad that essentially mimics Apple's standard infrared remote. Gestures, on the other hand, lets you control Boxee without having to look at the iPhone. The buttons are replaced by a Boxee logo that can be dragged around the phone's screen to navigate through options. Tapping the logo initiates a particular action (though we found that this was often misinterpreted by the app as a drag). Nevertheless, both methods are extremely responsive and Boxee is easy to control.

The Boxee Remote app still has a few bugs to be ironed out. The connection isn't always stable, and the app is prone to crashing once it loses the wireless connection. Using the app to navigate through large networked libraries on an Apple TV can also lead to horrible lag.

The app provides a keyboard when text input is needed. A Now Playing screen appears when media begins playing, displaying album art or an image thumbnail if available, as well as basic play/stop and volume controls.

Boxee Remote works, but we feel like it could do more. Incorporating full playback controls would make better use of the iPhone screen's real estate and would allow for quicker use without having to access the Buttons or Gesture modes. The ability to navigate Boxee's sources and media from the app itself, in a similar fashion to Apple Remote would also be great.

Given the Boxee team's penchant for public development, it is unsurprising to see that the iPhone app still has a way to go in order to be stable and fully functional. Currently Boxee Remote is a proof of concept that provides basic playback control.