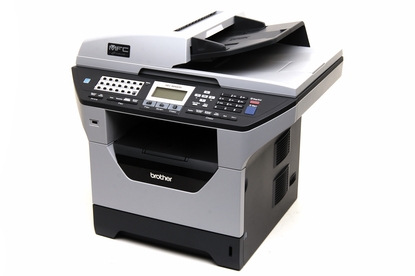 Brother's MFC-8890DW monochrome laser multifunction produces great quality documents at a quick pace, and it has wireless connectivity. We weren't impressed by its cluttered control panel and oversimplified Web interface, however.

The MFC-8890DW is Brother's premium monochrome laser multifunction printer. Targeted at small to medium workgroups that don't need colour printing, the MFC-8890DW boasts integrated Wi-Fi and a secure print feature. It doesn’t have a high price tag either. Unfortunately, this printer is hampered by an unintuitive control panel and overly simplistic Web-based interface.

The design of Brother's MFC-8800 series hasn't changed for some time, and the MFC-8890DW monochrome laser multifunction looks nearly identical to the MFC-8860DN. Though it doesn't push the envelope in printer design, it is compact and cheap without sacrificing features.

For a lower price than the MFC-8860DN you get an automatic document feeder, automatic duplexing and an easily accessible toner bay. Along with the expected USB, Ethernet and parallel port connections, the printer offers Wi-Fi. A USB port on the front allows you to directly scan to, and print from, USB flash drives.

Our only concern with the multifunction's design is its control panel, which is cluttered with buttons to change resolution, duplex and tray settings. Like the Samsung CLX-6210FX, it would be better if these functions were accessed from an on-screen menu. Some of the buttons are confusingly labelled, too. For example, you must press an arrow key instead of "OK" to enter a function, and the "Stop/Exit" button not "Clear/Back" to exit. Additionally, you can't change between copy, scan and fax functions without returning to the root menu first.

By contrast, the Brother MFC-8890DW’s Web-based interface is too simple. It can be used to configure basic network settings, but lacks any significant security measures like an IP filter or 802.1X authentication. Default settings for the printer, duplex, fax and copy functions are available, but you can't configure the scanner over the Web interface.

Despite the control panel being a little frustrating, the MFC-8890DW monochrome laser multifunction's individual features are easy to configure and use. Wi-Fi can be configured and set up directly from the multifunction, as well as over a wired network or USB connection using the supplied setup disc. Only one network interface can be used at a time, but the multifunction saves the settings for the disabled interface, making it easy to switch between them.

Secure Print is also a handy function, allowing you to send a print job to the Brother MFC-8890DW with a designated password. The multifunction will only print the document once that password has been entered, preventing wandering eyes from seeing sensitive information.

Scan options are comprehensive, allowing you to scan to a local or networked PC, a USB flash drive, an e-mail or an FTP server. Depending on where you scan to, the MFC-8890DW monochrome laser multifunction doesn’t always tell you which file type it will save a scan as, though it does support JPEG, XPS, PDF and secure PDF files. You can also initiate an OCR (optical character recognition) process directly from the multifunction to a networked computer.

The Brother MFC-8890DW monochrome laser printer prints black and white text documents at a consistent rate of 33 pages per minute when using the 300 and 600 dots per inch (dpi) quality settings. When using 1200dpi, pages print at a rate of 10.6ppm while under the highest HQ 1200 setting pages print at an average of 5.1ppm.

Though printing at the same resolution, the difference between 1200dpi and HQ 1200dpi is immediately noticeable. When printed with the higher quality setting documents are crisper and more accurate across a range of text sizes from 7pt up to 20pt. Document quality is fantastic overall, particularly for the price. Monochrome graphics are much darker and have a higher contrast than Samsung's SCX-5835FN, though it won't replace an inkjet printer for presentation graphics.

Using a high-yield 8000 page toner, the Brother MFC-8890DW monochrome laser multifunction costs 2.6c per page; this is extremely cheap cost for a printer at this price point. Combined with integrated wireless and secure print functions, it makes for a great multifunction for the office. The only caveat is its control method.