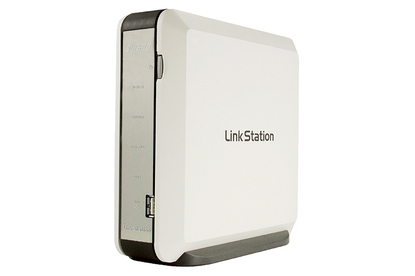 A great choice for home and small-office users, the LinkStation offers print serving, password security for shared folders, and an expansion bay--all at a reasonable price.

The Buffalo LinkStation does it all, does it well and does it at a great price. This versatile 250GB network storage device has two USB 2.0 ports for an external hard drive and a USB printer. You can use the second drive for either backing up the internal drive or adding storage. The Buffalo is a rare NAS to include a USB print server, a handy feature that lets home and small offices share inexpensive printers. While the competing Linksys EtherFast Network Attached Storage EFG250 includes a parallel-port print server, a significant number of inexpensive printers are now equipped only with USB ports.

We were just as impressed with the Buffalo LinkStation's software and documentation, which got us up and running in less than 10 minutes. The NAS correctly obtained an IP address from our network router, mapped itself as our PC's E: drive and then appeared in My Network Places ready to accept data.

The LinkStation's simple Web configuration software makes it easy for both home users and small offices without IT support to add users, groups and folder passwords.

We also liked Buffalo's Easy Backup utility for automating backups of client PCs to the NAS. You can select any combination of files and folders to back up to the Storage Center at regular intervals.

Performance was the only area where the LinkStation failed to be a star, with only average performance in our speed tests. However, in typical use, where you are copying or retrieving only a file or two at a time, this device's middling performance would be hard to spot.