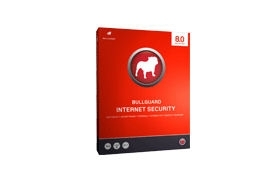 Implementing high security on your PC doesn't have to be hard, and BullGuard's Internet Security Suite 8.0 proves it. It's an unobtrusive program that's simple to install and use, yet it has plenty of customisable features to keep advanced users happy, too.

BullGuard's latest suite is comprised of antivirus, anti-spyware, firewall, backup, spam filter and kitchen sink applications. Well, I made the last one up, but the point is that this suite has all the essentials you need to keep your PC and data secure while it's connected to the Internet, yet it won't cost you the Earth.

All of the suite's applications can be accessed from one simple interface, which is perfect for novice users. At the same time, users who want more control over their security settings can setup custom filters to make sure that no applications are inadvertently blocked by BullGuard. However, even the custom configuration screens are fairly straightforward to use. We didn't have any problems getting into the firewall settings to give Firefox access to the Internet, as it was blocked by default.

Once connected to the Internet, we updated the virus and anti-spyware definitions and scanned our test PC, on which we found three viruses, which weren't detected by our previously installed antivirus program: Trojan.Generic.59759, in32.Worm.Sumom.C and Application.MWS. When BullGuard finds infected files, it can either try to disinfect, quarantine, or delete them. It will try all methods, one after the other, until the files no longer pose a threat. Unfortunately, it was unable to remove the Win32.Worm.Sumon.C from our test PC, but, using a log file, BullGuard's support team e-mailed us within an hour with instructions on how to remove it.

A very useful feature of this suite is its backup application, which can be invoked manually, scheduled to start at a specified time, or when the computer is idle. Documents, photos, video, music and Outlook (including Outlook Express) e-mail files can be selected for saving when using the built-in wizard. Whereas a manual backup will allow the user to select any files from any folder locations to be included in the backup operation. Backups can be saved on a local hard drive, to an optical disc or to BullGuard's Online drive. Subscribers get 5GB of space on this drive, which can be accessed easily via Windows Explorer. Upgrades can also be purchased -- 10GB costs $US8.

As for the built-in spam filter, it will block e-mail according to 'fingerprints' that have been placed on known spam e-mails, but new spam e-mail, which are yet to be identified as being spam, might make it to your in-box. If they do, these need to be tagged and identified as spam (using the buttons that are placed on the Outlook toolbar) so that they won't get through again. In our evaluation, the filter did a good job of sending flagged e-mail directly to the trash. Once we identified an e-mail as spam, the next one to contain the same keywords was blocked. Common subject themes, such as 'Earn $$$ from home' and '70% off viagra' were blocked without any user intervention. The program also lets you maintain black and white lists, where you can specify if an e-mail address is to be blocked or let through.

Most of BullGuard's functions worked well in our tests and we love the program's clean interface. It's perfect for home usage and one licence can be used to protect up to three computers. A one-year subscription costs $89.95 and existing BullGuard subscribers can upgrade to version 8.0 for free. It'll work on Windows Vista, as well as XP. The only thing it lacks is parental Web site filters, but this isn't an essential feature.