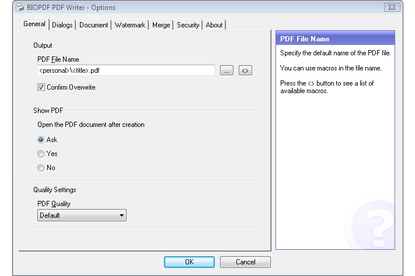 This is best of breed. Uninstall the other free PDF tools you may have tried and use Bullzip.

Occasionally a freebie surprises us with a feature or two we weren't expecting. In Bullzip PDF Printer's case it's the ability to password-protect PDF files and even watermark them. Normally, you have to fork over a fair amount of cash for these niceties. Both features - as well as the basic PDF printing - worked perfectly.

Like many free PDF apps, Bullzip is actually a front-end for the public domain Ghostscript Postscript/PDF printer driver, which is where the PDF features actually reside. Still, for anyone to take the time to implement the more advanced features in a super-clean, advertising-free little app is, well, great.

The authors accept donations, and if you're as pleased with the program as we are you might consider sending them a quid or two. They also have a pay version, PDF Writer, which according to the company is "superior to the bullzip edition in some installation related matters". You might donate by buying that program instead.