If you're looking for an affordable flatbed scanner that turns photos into high-quality digital images, the Canon CanoScan LiDE 200 is a worth a look. 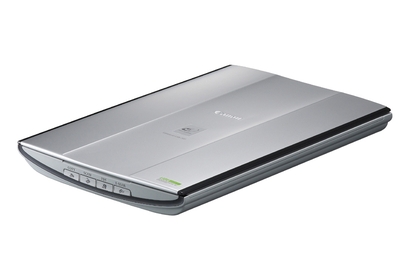 The Canon CanoScan LiDE 200's main limitations are that it scans only reflective items (no film scans) and it can't do much in the way of OCR. We were able to create searchable PDFs and plain-text (.txt) files from various documents, but we couldn't save multicolumn layouts (including tables and graphics) in RTF, Microsoft Excel, or any other editable file formats. If you don't need to scan film or perform a lot of OCR, the portable Canon CanoScan LiDE 200 is a compact and energy-efficient scanner.

But the Canon CanoScan LiDE 200 has some drawbacks, including skimpy OCR functions and the inability to scan transmissive items (such as film).

The sleek 1.6Kg Canon CanoScan LiDE 200 is roughly the size of a laptop PC and just as portable. We tested a production model, which was easy to install and use. Its energy-efficient design (2.5 Watts maximum power consumption) uses a single cable for both USB and power. Four handy buttons automate common tasks (copy, scan, PDF, email), and in my tests they were easy to customize.

Canon's ScanGear software conveniently provided a choice of control modes (basic, advanced, auto), and the bundled ArcSoft PhotoStudio 5 offered a thorough selection of tools for editing and manipulating my scanned images. To keep the Canon CanoScan LiDE 200's cost down, however, Canon elected not to include an optical character recognition (OCR) application in the software bundle.

In a range of tests, which included scanning from a variety of originals (such as an old, faded photo), the Canon CanoScan LiDE 200 churned out good-looking colour and monochrome scans at a fast clip.

It took only 10.6 and 15 seconds, respectively, to scan a 4-by-5in photo at 600dpi and a full-page colour document at 300dpi — both faster scores than what we've seen from competing scanners we've recently tested. The Canon CanoScan LiDE 200's image quality was generally very good, too, with crisp details and accurate colour, and its fading and backlight correction features greatly improved old family photos.