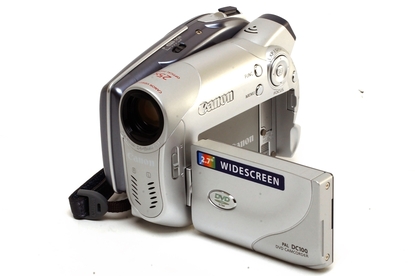 Above average video quality is countered by a lack of an SD card slot and poor quality stills on this DVD camcorder. A good option for the buyer on a tight budget.

When it comes to the budget end of the DVD camcorder market, we're used to seeing pictures marred but all kinds of compression artifacts and inaccurate colours. There's usually little room for manual controls either. So it's good to see Canon producing a cut price model that addresses both of these concerns to some degree. It's certainly not an outstanding performer by any means, but for the consumer on a budget, it will fit the bill nicely.

Image quality is key with camcorders, and thankfully the DC100 manages to produce relatively crisp pictures free from most image aberrations. There's still noticeable ghosting across moving objects and rapid pans, but we're yet to see a DVD camcorder that doesn't produce this effect to some degree. The colour is also a little washed out, but it's not too bad overall.

One area that could do with improvement is the contrast between areas of light and dark; the DC100 isn't quite as adept as some of its peers at producing the right exposure. However low light footage is surprisingly clear, with our shots in a darkened room retaining a surprising amount of colour. The problem here is the graininess of the footage; a typical pitfall for cheaper camcorders. The DC100 suffers from a degree of graininess in the footage in anything less than perfect light. Overall though, we'd say the DC100's video is far better than many sub-$1000 DVD camcorders on the market.

Moving on to still images, it seems like Canon really isn't intending people to seriously use this aspect of the camcorder's functionality. For a start, it's not that easy to take stills. We had to consult the manual to even work out how to do it, which really shouldn't be the case with a basic model such as this. It turns out that the ability to take photos has to be activated from inside a menu before the DC100 will let you select the photo mode - a bizarre decision on Canon's part.

The second obstacle to taking still photos is the lack of an SD card. This means it's necessary to save pictures to the DVD. In some ways this is more convenient, but with disk space at a premium on these diminutive models, we'd have liked to see some sort of flash memory based solution. The lack of an SD card slot has also meant Canon didn't see fit to include a USB port, so PC connection isn't an option. However, all these problems aren't really that debilitating, as the grainy, lifeless stills that the DC100 throws out are hardly worth bothering with. Capturing at a paltry 1024 x 768 these pictures might just do for the odd 6 x 4 print if you're desperate. There's no flash either, so images in low light don't look too good.

Canon is generally fairly good at providing some manual controls with their camcorders, and while the DC100 doesn't have the whole range, it's has a pretty good offering for a budget model. There's manual focus, manual exposure, aperture priority, shutter priority and a range of white balance modes across both video and still image modes. The still image mode even gets a couple of extra light metering options, which is pretty rare to see. Like all Canon camcorders, there are a vast number of digital effects filters such as sepia and mosaic mode.

When it comes to hardware features, things are reasonably adequate. There are no headphone or microphone inputs, which isn't surprising for a model of this price, but the 25x zoom is pretty speedy, and the image stabilisation does a good job of keeping the picture steady for most of the zoom's range. The 2.7in widescreen LCD is about average, giving a clear image and performing well in direct sunlight. One slight letdown is the control system, which we found to be a little unhelpful. There are various buttons strewn across the DC100's chassis, and few of them seem to be in convenient places. Battery life is fairly good at just over an hour and ten minutes.

Overall, the DC100 is an above average, budget DVD camcorder. Image quality is far from perfect, but it is a good deal better than a lot of the competition. If Canon could address the problems with still images and include an SD-card slot, this would be a real winner. As it is, it's still worth considering if you're on a budget.