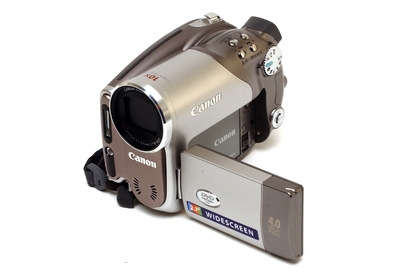 The DC40 is an excellent DVD video camera.

Canon's DC40 is the company's top of the range DVD camcorder. As such it offers a good range of features and decent quality video to boot. The let downs come in the form of occasionally blurry stills, the lack of a microphone jack and a tendency to over-expose bright areas, but as far as DVD camcorders go, this is one of the best on the market.

Here at the GoodGearGuide we're not huge fans of DVD camcorders. They're certainly easy to use, but they do seem more prone to image problems than other formats. However, some people love them, so we're always on the lookout for models that are worthy of your hard earned cash. With the DC40 we think Canon is on to a winner. Some DVD irritations are unlikely to be fixed, such as the paltry 20 minutes recording time for each disc, but most of the problems we associate with DVD camcorders are dealt with pretty neatly here.

The most important feature of any camcorder is the video quality. With the DC40 Canon has done a pretty good job, and while it still falls short of the best Mini DV camcorders, it's decent enough. We usually expect to be bombarded with image aberrations such as compression mosaics and ghosting when looking at DVD camcorders, but these were nowhere to be seen here. Colours were bright and accurate with excellent contrast and minimal stuttering. Our main qualm with the footage was an occasional tendency to over-expose bright areas, especially white.

The good video performance also crossed over into our low light tests. We were very surprised to see how well the DC40 picked up details in a darkened room, with bright colours still showing through. The footage was a good deal grainier than in bright light, but we can't expect miracles. Should you wish to film in complete darkness then it's possible to use the handy built-in light. This single LED is blindingly bright, and illuminates roughly 2m in front of the camera, though the further away from the subject, the grainier the footage. There is also the option to turn on a slow shutter mode, which greatly enhances low light footage without the need for the LED, but it also makes the picture so jerky as to be almost unusable.

One area in which most camcorders fail is still images. Although the implementation on the DC40 isn't perfect, we were very impressed. The 4 megapixel images look crisp and sharp with excellent colours. However, we did notice the same tendency to over expose white areas as we saw in video mode. Shooting in anything less than perfect light was also not up to scratch, with several of our shots coming out blurred. This was only apparent in shots taken indoors at close range but was annoying nonetheless.

A full range of manual options are included with white balance, exposure, focusing, aperture and shutter priority modes, and these are all supported for both still images and videos. For the less ambitious photographer, preset modes such as sport, portraits, landscape and the like are offered. A flash is also included. Canon has decided to include a mini-SD card slot as opposed to the more popular SD. As a card isn't included you'll have to purchase one if you want to take any still photos, adding a little to the cost of the package. Transferring videos and images to a PC for editing is simple, as both can be copied over easily using the bundled USB cable. This is in addition to the convenience of dragging video files directly from the DVD.

When it comes to using the camera, Canon has done a fairly good job at making the DC40 intuitive, though it could do with a few improvements. Most of the controls are easily accessible with one hand when holding the camera, though placing the multi-directional toggle on the side of the camera seems an odd move and isn't helpful. The main modes such as automatic and shutter priority are all accessed from a still camera-style control wheel which is good for anyone who's had experience with an SLR or advanced digital camera. The 2.7in widescreen LCD is standard for this kind of camcorder and does a good enough job. It's also clearly visible in sunlight, and a small backup viewfinder is also present.

The build quality of the unit is excellent, with a tough feel that inspires confidence. In fact it's almost too good, as the DC40 is built like a tank, and at 480g it weighs a fair bit more than other camcorders we've looked at recently. The 10x zoom lens is about average, and scans back and forth quickly. When it comes to finalising discs (a necessary step before the DVD can be played back outside the camcorder) Canon has done a good job at simplifying the process, with a clearly marked "finalise" button sitting on the side. We were slightly surprised to see that our five minute film took seven minutes to finalise though. One final feature, or lack thereof, is the omission of a microphone jack. Battery life is on the short side, at a fairly disappointing 40 minutes of recording.

Overall the DC40 is a good buy for the user who is a fan of DVD camcorders. It offers good quality video and stills, a full range of features and solid construction. It won't convince the Mini DV faithful to convert but it's a step in the right direction.