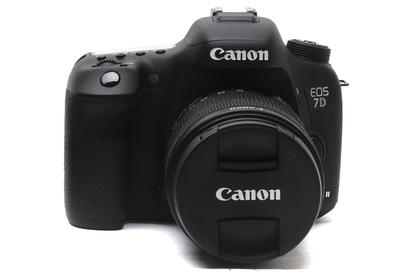 Those of you who are into sports photography, action photography, and any other types of photography where a really fast camera is required, will do well to consider Canon’s EOS 7D Mark II. When the original 7D was released five years ago, the message was strong that this was a camera for a photographer (or indeed an adventurer) who wanted professional frame rates at a non-professional price point. With the EOS 7D Mark II, that message is now even stronger, thanks to a faster frame rate and bolstered processing power.

What the new EOS 7D Mark II brings is a capability to capture up to 10 frames per second (in RAW and JPEG, though RAW is limited to 31 continuous shots), which is an improvement of 2 frames per second over the original EOS 7D. Furthermore, the sensor’s pixel density has increased, with its APS-C sized sensor now offering a 20-megapixel resolution, compared to the 18-megapixel resolution of the original 7D.

Focusing performance has been upgraded significantly, with the 7D Mark II now offering a 65-point autofocus, as opposed to the 19-point autofocus that was present in the original 7D. Points are selectable on an individual basis, as well as in clusters (up to 15 points in the centre of the frame, and 12 on the sides), and in combination with the EFS 18-135 IS lens, it worked accurately during our tests.

But while the big difference between the 7D Mark II and the original 7D rests in the processing power and the speed that the camera can provide, there are also some notable physical differences.

It’s a relatively big digital SLR (especially considering it has an APS-C sized sensor rather than a full-frame sensor), which means you’ll either find it to be too big or just perfect. The weight will depend on the lens that you use, of course, and if you happen to use bigger EF lenses, it will certainly look like a pro piece of kit. Suffice to say, it's as serious a D-SLR as any, and you realise this the moment you hold it in your hands.

The body feels solid, and there is a wide array of buttons all around to give you quick access to the main menu and exposure settings. The mode dial is on the left, and it has a spring-loaded lock on it so that its position can't be accidentally changed while you transport it in your bag. The menu navigation has been changed to offer clearer controls, and there is now a Quick Menu button right near the thumbstick so that you can get to nitty gritty settings in a quicker fashion. On the original 7D, the Quick Menu was placed up in the left corner, which wasn't an intuitive place for it.

One thing that we missed while using this camera is a hinged screen. It's screen is fixed. Many times we wanted to shoot something from an angle that was either too low or too high to be done comfortably while looking through the optical viewfinder. While we could switch to Live View and see the screen in these instances, it still wasn't as easy as it could have been with an articulating screen.

So why would you buy a camera like this?

The EOS 7D Mark II is the type of camera you can use to capture sporting events, weather, wildlife, and basically any type of action shot with a fast-moving or changing subject. Canon has packed two Digic 6 processors into the body, an upgrade over the Digic 4 processors from the original model (which you'd expect considering the age of the original 7D), and they work together to allow the EOS 7D Mark II to capture up to 10 frames per second.

You can shoot long bursts of photos effortlessly with this camera, and if you’ve got your framing and exposure correct, you will most likely end up with the picture that you were hoping to capture. Hundreds of photos can be snapped in a short amount of time with this camera, and the type of memory card that you use can be a difference maker: you need one with a high write speed so that the camera’s buffer can be cleared as soon as possible.

In a one-minute test, we were able to capture up to 570 JPEG frames during the same burst, with the rate only slowing a little when the focus had to change (if we had the focus set to one-shot mode, it would not have changed at all and would have kept firing at the same pace throughout). During this test, we used a SanDisk Extreme Pro SD card, which has a U3 speed rating and a claimed 250MBps (megabytes per second) write rate, and the camera’s 'busy' light was not seen at all. With a U1-rated microSD card, for example (U1 cards have a slower write rate), the camera’s write light was almost constantly illuminated and we eventually hit a point when the camera became too slow to shoot with.

The use of an SD card is a new thing for the EOS 7D Mark II. The original 7D only had a Compact Flash card slot. The new camera doesn’t do away with the Compact Flash slot, and instead uses both types of slots, perhaps so that those of you who want to upgrade to the newer model will still be able to make use of your old cards. Furthermore, the two slots can be set up so that photos can be captured to both cards as a form of backup.

For those of you looking for a hybrid shooter, movie mode can be invoked via a dedicated switch that resides next to the optical viewfinder, and the camera can be used to good effect for shooting up to Full HD video (either in auto or manual shooting modes). Automatic focusing performance was swift in video mode, with out-of-focus- elements coming into focus without much delay. However, when shooting outdoors in scenes with lots of movement, we noticed the autofocus was quite sensitive and moved around a bit too much on wide angle shots. In these instances, tracking can be set for the intended subject to always be in focus, even while zooming.

During bright light conditions, you can push the shutter speed up to 1/8000th of a second, which can also open plenty of creative opportunities for use with a wide aperture. The overall clarity of the captured photos is high, and there is plenty of scope for cropping. However, we'd go easy on the ISO speed if you intend to crop your images heavily. Shooting in dim lighting conditions can be aided by the high ISO capability of the camera, which can reach up to 16000. We found that shots were usable up to ISO 1600 in many instances, and that discoloured noise became more noticeable at ISO 3200.

Here are a few sample pics.

Read more Is the Epson XP-950 a photographer’s dream printer?

Read more What’s the difference between the Canon EOS 70D and the EOS 7D Mark II?

In many ways, Canon's EOS 7D Mark II is a typical replacement model to the original: it's faster, has more processing power, and it brings forth tweaks to the body and feature-set that make it a better product overall. If speed is your major concern, then the 7D Mark II is hard to beat. That said, if you already own a 7D, you might also have your eye on a different type of upgrade, such as a full-frame EOS 6D or EOS 5D model. Those will give you slightly less speed at around 6 frames per second.