A professional D-SLR digital camera for those who require speed and excellent low-light performance. 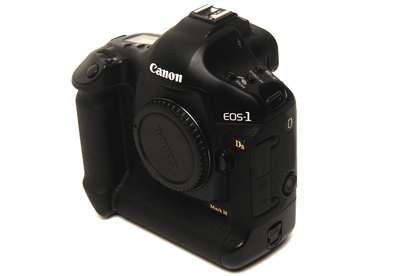 Canon's flagship full-frame digital SLR camera will capture huge images with its 21.1-megapixel sensor, and it will do a stellar job in low-light conditions. It's a professional camera that will capture crystal-clear pictures when paired with the right lens, and it is a huge step up from the EOS 1Ds Mark II.

When a digital SLR camera has a price tag of $11,999 — and that's just for the body — you know it's not something that everyday folk will appreciate. Instead it's likely it will only appeal to professionals who make a living from photography. Indeed, playing with a camera like the Canon EOS 1Ds Mark III, one quickly gets a sense of how the other half lives — photographically speaking — as it produces huge images with faithful colour reproduction and barely a hint of noise.

The Canon EOS 1Ds Mark III replaces the EOS 1Ds Mark II in the company's D-SLR line-up. It improves on the Mark II, which was released in September 2004, in a number of ways. Both cameras feature a full-frame (35mm) sensor (this is denoted by the 's' in the product name), but the Mark III is able to capture pictures at a much higher resolution. It has a 21.1-megapixel CMOS sensor, along with technology that makes sure enough light is able to reach each one of those pixels. The Canon EOS 1Ds Mark II only has a 16.7-megapixel sensor.

The extra resolution means that you'll need more storage than ever for RAW files, as each one will consume about 25MB. The Canon EOS 1Ds Mark III has a CompactFlash slot as well as an SD card slot. Either can be used to store images, and file transfers can also be made between the two slots.

Despite the huge resolution of the Canon EOS 1Ds Mark III, it is not slow. It's response time is instantaneous; the moment you press the shutter, you can feel the shutter release. There is no waiting time when capturing individual images, so you can quickly frame the next shot; in continuous mode we were able to shoot up to 13 frames in one burst before the camera had to slow down and process the images. We used a SanDisk Ultra II 1GB card for our tests, but got the same result when using a Panasonic Class 4 2GB SD card. The Canon EOS 1Ds Mark III uses two DIG!C III processors to handle captured images, and with a speed of five frames per second in continuous shooting mode, they can process up to 125 megabytes of data per second; this makes it much faster than the Mark II.

It's all well and good to capture images quickly, and this is one of the reasons to buy a professional camera, but the Mark III also captures them without a hint of noise. All of our test shots, whether in the studio or outdoors, were crystal clear, even when we shot at the maximum standard ISO speed of 1600 (you can use speeds up to 3200 via the custom function modes). The only time you will see noise is if you take shots in especially low light and then brighten them up significantly during post processing (and even then you can use noise removal to clean them up).

In fact, this is one of the things that make the difference between the Canon EOS 1Ds Mark III and an entry level D-SLR seem like night and day. The pictures taken with the Mark III just look noticeably cleaner, more natural, and also not as cramped (due to the full-frame sensor). Of course, this will depend on the type of lens you use, too, and the Mark III will accept any of Canon's EF-mount lenses. We used a Canon EF 24-105mm 1:4 L IS USM for our tests, and were able to produce near-perfect shots every time.

We did notice that some images came out a little too neutral, but this was easily fixed during our post processing. Most of our images — even ones taken on cloudy days — required only minimal post processing for contrast. We ran the camera in manual mode most of the time, as the f/4 lens didn't do a perfect job in aperture priority mode when taking photos in very bright light. Conversely, in low light the Mark III's performance while using a slow shutter speed was spectacular. Handheld shots at 1/20th of a second came out almost crystal clear thanks to the built-in image stabilisation of the lens. It's odd to hand hold the camera when using such a slow shutter speed, because it has a heavy shutter that you can really feel. The camera is heavy enough to keep steady for short periods of time (unless you use a massive lens). After long periods of time, you might get shaky hands. It's best to have a monopod on hand, just in case.

The Mark III's body has all the buttons you need to access the most common functions for affecting the exposure and the focus method (and there is a built-in hand grip for portrait shots), but we wish there was an extra dial near the shutter for the aperture control. As it stands, to change the aperture you must either press the exposure button and then move the hand dial, or set the camera's power switch to its third position to enable the thumb-wheel on the back of the camera and use it to change the aperture value. It's a tad unintuitive.

Live View makes an appearance on the Mark III, but it didn't show us the results of autofocus functions on the LCD screen; manual focusing did show up through the screen, however. We're not fans of Live View in the first place, especially on cameras that have a beautifully large optical viewfinder such as this one, but it can be useful when framing shots in a studio environment. While on the subject of focusing, the Canon EF 24-105mm 1:4 L IS USM lens allowed us to select from nine manual focus points towards the middle of the scene, which is not as comprehensive as we would have liked. For autofocusing, the Mark III has 45 focus points, which is six less than Nikon's D3x.

In the end, the Canon EOS 1Ds Mark III is a huge improvement over the EOS D1s Mark II. It's faster, has a much larger sensor and has a 14-bit analog to digital converter. It also offers Live View and built-in dust reduction. It's a beast of a camera for any professional Canon user who wants to take a step up from the Mark II.