A Canon D-SLR built for speed -- perfect for action photography The Canon EOS 7D is definitely for the action photographer: It has a fast burst mode and captures huge images. Its high ISO performance is very good, but we found its focus to be hit and miss.

Canon's EOS 7D digital SLR is designed for users who want fast shooting performance. That means sports photographers, nature photographers, and basically anyone who needs to freeze-frame a fast-moving subject. It has a crisp-sounding shutter, a sturdily built (and heavy at 900g) stainless steel and polycarbonate body, and all of its settings can be controlled via dedicated buttons or button/dial combinations.

The EOS 7D slots in to Canon's digital SLR line-up between the EOS 50D and the 5D Mark II. It costs $2699 (for the body only), which is $800 more expensive than the 50D and $2100 cheaper than the 5D Mark II. Some of its features are actually better than those of the 5D Mark II (such as its greater number of focus points and faster burst speed), but it's not fair to compare the two cameras directly — the 5D Mark II is a full-frame, 21.1-megapixel, 35mm camera.

The EOS 7D, on the other hand, doesn't have a 35mm sensor, instead using a 22.3x14.9mm, 18-megapixel sensor. It produces huge images (up to 5184x3456 pixels and 18MB in size) and requires CompactFlash cards to store them. We used an 8GB Lexar Professional UDMA 300x card to get the most out of the camera.

With a burst speed of almost five frames per second in our tests (Canon quotes 8fps), you'll almost certainly be able to capture all the action of a sporting event, a bird swooping down to its perch, or water droplets hitting the ground. However, it's outclassed by a professional high-speed camera like Canon's EOS 1D Mark III, which can shoot at 10fps according to the company. The EOS 1D Mark III also costs almost two and a half times as much as the EOS 7D and only has a slightly bigger sensor.

We captured this rain drop using shutter priority mode on a gloomy Sydney day. Using a shutter speed of 1/160th of a second and an ISO speed of 400, the camera was able to capture the explosion as the droplet hit the tile.

It's worth noting that we didn't experience the ghosting problem that Canon Australia has posted about on its Web site. This problem crops up in images that have been taken in burst mode with a less than optimal exposure.

You can see from the shot above that even on a gloomy day the EOS 7D will take vibrant shots in its standard colour mode, although you might have to adjust the levels slightly during post-processing to give the darker colours more richness. In dark environments the EOS 7D's ISO speed can be boosted greatly, allowing you to use a shutter speed fast enough to counter blurring as you hold the camera. We achieved usable results in dimly lit environments primarily using ISO 1600, but you can get great results even at ISO 3200; in our low-light tests, colours were captured vibrantly and we didn't even have to adjust the luminance of the shots in post-production. 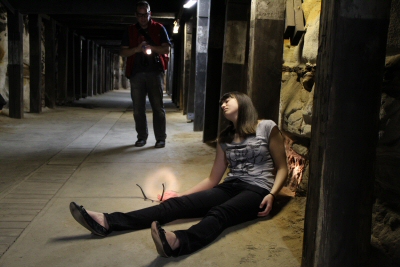 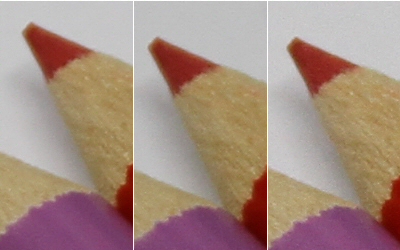 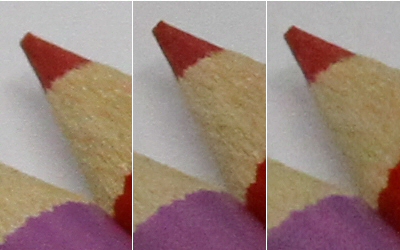 From left to right: ISO 800, ISO 1600, ISO 3200. Only slight noise is visible up to ISO 1600, and the solid colours are starting to get some white speckles. The good news is that the speckles are not introducing rogue colours into the mix. 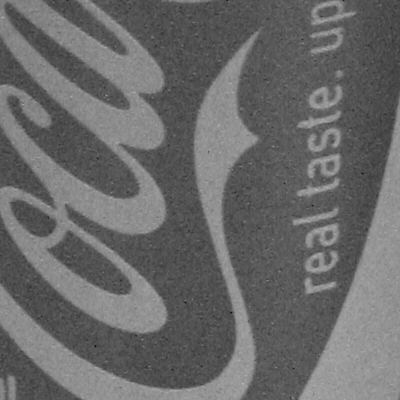 At ISO 6400 the speckling is more pronounced, but it looks more like grain than anything else. There is some discolouration in dark areas at this setting, but it won't be noticeable unless you heavily crop your images. It's a good setting to use with the camera's black and white mode if you want to get more of a grainy look, as we've done with this Coke can.