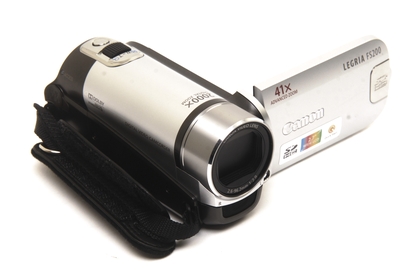 The Canon FS200 is a serviceable standard-def camcorder for beginners and cash-strapped videographers. It strikes a good balance between advanced features and affordability.

The Canon FS200 is a flash memory–based camcorder that records standard-definition video to SD/SDHC memory cards. It replaces the Canon FS100 in the company’s standard-def line-up, with many of the same components and features making the leap across (including an identical pixel count/sensor). Boasting a 41x optical zoom lens, a compact body and an external microphone jack, the Canon FS200 is a versatile option for videographers on a budget. As an added bonus, it comes bundled with an 8GB SD card.

The first thing that stands out about the Canon FS200 is its small size and eye-catching colour scheme (depending on the version you buy; we tested the boring silver version). With dimensions of 55x589x121mm and weighing just 225g, it will fit into all but the skinniest of jacket pockets. On the downside, its lack of heft can translate to shaky video — especially if you're a camcorder novice. This issue is exacerbated by the lack of an optical image stabiliser, though a little practice should iron out any kinks.

Somewhat surprisingly, the Canon FS21 comes with external headphone and microphone jacks. This is a huge boon for Tropfest hopefuls and budding documentary makers, as it allows them to capture cleaner audio than the onboard microphone could hope to provide. Canon seems to be the only camcorder vendor still flying the audiophile flag at full mast — most manufacturers are eschewing this feature to cut down on costs, especially in standard-def models. If you need an affordable camera with external audio, the Canon FS21 is one of the only options on the market.

Like its FS100 predecessor, the Canon FS200 sports a 1/6in CCD sensor with a resolution of 1.07 megapixels. As you'd expect, the video quality can't compete with Canon's numerous HD efforts, but it still does a pretty good job for a standard-def camcorder. Like the FS100, it performed solidly in sunny environments, with image quality taking a sharp nosedive in dim lighting. Naturally, the footage looks best on a regular CRT television, with plus-sized HDTVs exaggerating flaws. All up, we were quite happy with the FS200's video performance. It is easily the match of most standard-def camcorders, including more expensive options like the Panasonic SDR-H80-K.

Like most camcorders, the Canon FS200 also comes with a still image mode. However, with a maximum resolution of 0.78 megapixels, its output is patchy to say the least. Nevertheless, it should prove suitable for social-networking sites and the like — provided you take your happy snaps in daylight. (Annoyingly there is no inbuilt flash.)

Canon often struggles to make its camcorder menus accessible to novice users, and the FS200 is unfortunately no exception. Everything is laid out where it should be and the joystick is responsive, yet it still falls short of many of its rivals — bite the bullet and give us a touch screen already! On the plus side, the range of modes and features on offer is quite extensive for an entry-level camcorder. All the essentials (and not-so-essentials) are present, including adjustable white balance, manual focus and exposure settings, backlight compensation, eight scene modes, digital image effects, an LED video light and Video Snapshot.

Video Snapshot is a new addition to the Legria range which Canon is touting as The Next Big Thing. It basically records video in four second bursts and assembles them into a kind of movie slideshow. The idea is to remove the lengthy shots and rambling, longwinded takes that ruin most home videos. While the Video Snapshot tool does have its uses, does it really deserve its own dedicated button on the camcorder? We think not. Most users would have doubtlessly preferred a beginner-friendly Easy button; which is sadly absent.

There isn't much more to add about the Canon FS200. It's an affordable standard-definition camcorder that serves its primary function well and also comes with some handy additional features. If you've yet to jump on the HD bandwagon, it won't disappoint.