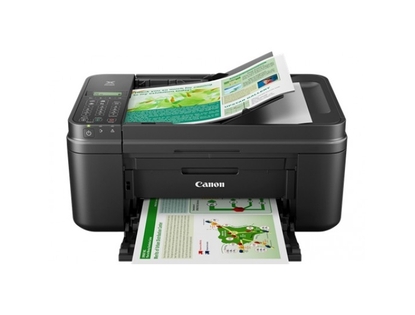 Since the entry price for fully featured printers has come down so much over the last few years, buying a new printer is almost an impulse decision. Canon’s MX496 is one of the printers that fits the buying-before-researching scenario, but it does pay to know what you're getting yourself into with such inexpensive gear.

It's a printer with multiple functions that you can find for about $115 from your nearest electrical retailer, and it can do things such as connect to Wi-Fi and allow you to print through the Internet, in addition to more traditional things such allowing you to print out photos and scan documents.

It may look attractive and compact in its marketing material, but when you buy a printer this cheap, you have to expect many cut corners, and the corners that have been cut on this model mostly affect its build quality and design.

It’s a clunky machine with flimsy and awkward paper trays, and its control panel and screen can leave you frustrated at times. It’s also a very loud printer, and this becomes obvious the first time you send it a print job and its rollers kick into action to feed the paper.

Installing the two cartridges for this printer is an exercise in awkwardness compared to many other printers. The black (PG645) and colour (CL646) cartridges need to be pushed into the print head, which is accessible by dropping the front door, and you need to crane your neck so that you can see it. The cartridges don’t go in smoothly, though they are guided to where they need to go, and you have to apply some force to get them to click into place. A beep from the printer will let you know if you’ve been successful.

The cartridge cost is $25 for black and $30 for colour, and both have a stated yield of 180 pages. You’re looking at a stated running cost of about 26 cents per page (without the cost of the plain paper). If you print full-page documents, and documents with a lot of graphics, this yield be lower. If you print photos, it will be much lower.

Adding paper to the printer is also awkward. The input tray, which holds 100 sheets, is located at the base of the printer, and it doesn’t come out completely. Instead, it comes out only part of the way so that you can see the paper guides in order to place your paper correctly. Then you need to apply some force to get the paper tray back into the printer so that the paper recognition can begin. Every time you replenish the tray, you have to confirm what type of paper you have inserted.

If you can get over the inferior build quality and design, then you will have yourself an A4 inkjet printer that can print documents and photos, scan via flatbed and automatic document feeder (ADF), copy documents, and send and receive faxes. You can connect it to a computer via USB 2.0 (cable not supplied), or you can fire up its Wi-Fi and connect it to your wireless network.

Setting it up on a modern Windows computer via USB won’t take much more than plugging it in, switching it on, and letting Windows find the software for the printer automatically, though you will still want to download the proper drivers from Canon’s Web site, especially for the scanning tools.

For wireless networking, Wi-Fi Protected Setup (WPS) is supported. It should theoretically allow you to connect the printer to your network by pressing the WPS button on your router, and then by hitting ‘OK’ on the printer’s control panel. This didn’t work for us at all after five attempts, but it was easy enough to just let the printer search for our wireless network so that we could select it and then enter our password. It actually took less time (about a minute) to set it up manually, than it took to wait for the printer to tell us a WPS connection couldn’t be established.

When you’ve got this printer connected to your network, you can do things such as print from a phone or tablet by using the Canon Inkjet Print app (which can be used to connect other services such as Flickr, Facebook, and Dropbox), as well as set up services such as Google Cloud Print so that you can print Google Drive content from any Internet-connected computer or device.

These features can be a bit of a pain to set up. You have to enable services on the printer, get it to print out URLs and QR codes, and enable permissions in your accounts to allow the printer to access them. That said, once it was all set up, printing Google Docs from any computer was easy (especially through the Chrome browser).

In terms of print quality, text documents look clear enough and are perfectly acceptable for school assignments and work proofs. A page of full text can emerge in about 10sec. Photo quality is decent, though it lacks a bit of definition and its colours aren’t as vibrant as what we’ve seen from other printers, such as Canon’s orange PIXMA MG7560.

Scanning is best done from a smartphone once you have networked your printer and installed the Canon Inkjet Print app on your phone. Scanning directly from the printer didn’t work for us, even when we told it to scan to our USB-connected PC (it was the only option). The printer can detect whether the automatic document feeder or flatbed needs to be used. An SD card slot is lacking, so you can’t scan directly to a memory card.

In a nutshell, this printer is fine if you don't want to print in large volumes, and if you’re looking for something cheap that can give you print, scan, copy, and fax functionality. It’s loud, flimsy, its menu takes time to get used to, and we also found it to be a little temperamental (WPS didn’t work, nor did direct scanning from the printer to our PC). You have to spend more money if you want something with better build quality and a quieter paper roller mechanism for your home office or bedroom.