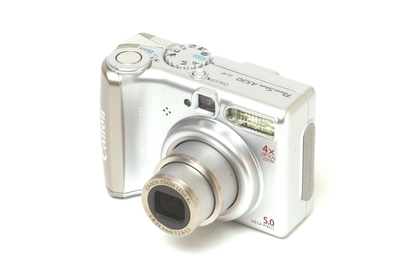 A nice, cheap advanced 5 megapixel model. It doesn't have the best image quality in the world, but at this price it is a decent buy.

If you've looked over our previous Canon camera reviews such as that of the much lauded Powershot A620 you'll see their products tend to impress us. So when the new series launch timed perfectly with the introduction of our Imatest camera testing we were overjoyed that they would be some of the first cabs off the rank. We were expecting big things from the Powershot A530 and had already started to compose a long list of superlatives to describe the performance when we actually looked at the results. Things didn't turn out as expected.

It's not that the A530 performed particularly badly, but it certainly didn't excel in any one area. The sharpness score of 1165 wasn't bad for a 5 megapixel model, but our shots really showed it wasn't as clear as something like the Kodak Z650 which we also recently took a look at. Colour saturation scored a rather average 8.4 and whilst most of the spectrum was reasonably accurate (grey scale was quite good) anything with red in it, including purples and pinks, suffered from noticeable variance. Image noise was the area where this model performed at its best, with a very decent score of 0.85%.

Overall our shots came out looking pretty decent, but not up to the high standard we hold most Canon models. Edges weren't crisp with some noticeable blurring around leafy areas and colours were a little off, although for standard 4X6 or 6X8 inch prints it will still do an admirable job. Thankfully there was no purple fringing to be found, even in our most strenuous outdoors pictures. It is also worth noting Imatest revealed a tendency for this model to oversharpen shots, and whilst it wasn't as severe as what was exhibited on the Kodak Z650, it was higher than we'd like to see.

We found the A530 responded pretty quickly in general. Shutter speed was very low at roughly .07 seconds meaning you'll be capturing everything right as it happens. Startup was equally speedy at just over a second. The only real let down was shot to shot time, which could have been improved at just over 2 seconds.

Despite offering only average image quality, the rest of the package is quite nice. Canon's Powershot series have always had a distinctive design, with a jutting side grip usually reserved for big zoom lens cameras. Whilst it may not be the most attractive camera in the world it does the job well. The body could be a little sturdier, with more plastic present than metal, but there were no obvious weak points. Most of the functions are accessed via the function wheel with the remainder spread out across the back, around the directional pad and everything operated quickly and comfortably.

Canon has done something nice with the interface on this model, putting all the photographic menu options in their own separate place. So rather than having to hit the menu button and navigate through a whole bunch of camera settings (volume, LCD brightness etc) you can now just hit the "function" button and bring up all the relative options such as ISO level, white balance, colour and shooting mode. Nifty.

You'll need to use this menu a lot if you want to take advantage of all the stuff Canon have crammed into this model. To us it feels like an entry level advanced camera, but the feature set would indicate otherwise. Whilst the model is missing aperture and shutter priority modes (it skips straight to full manual) we didn't miss them terribly, preferring to change things completely to our own liking. Having full manual white balance, ISO available up to 800 and a brilliant, infinite continuous shot mode, that shoots at 2.5 frames per seconds (or roughly .7 frames with flash on) more than made up for this. The one area we felt let down was with exposure compensation. It can be changed in a few obscure locations, but on both automatic and manual settings there is simply no way to adjust it. Such a basic function really shouldn't have been overlooked. There are also 18 scene modes to help soothe those beginners' nerves and your now standard 640x480 movie recording options. Overall, a great list of options left just shy of excellent by the missing exposure settings.

We found battery life to be pretty decent, but not exceptional. Canon has once again elected to use AA batteries on this model, which will wind up costing you in the long run. Still, we managed to snap off about 250 shots before the batteries died, which is a reasonable effort on their behalf.