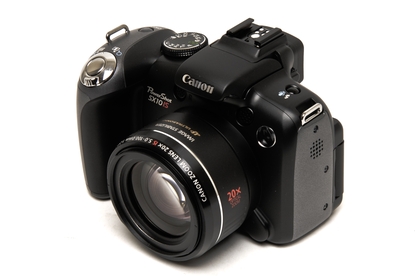 Another impressive entry into the mega-zoom market, Canon's PowerShot SX10 IS captures good if not incredible snaps and offers a huge wide-angle zoom lens along with manual features. It's a compelling option for more experienced users.

Delivering a much needed upgrade to the popular PowerShot S5 IS, the Canon PowerShot SX10 IS is a fairly strong mega-zoom offering. With a gigantic 20x optical zoom it takes joint lead of the category as far as pure size is concerned. While it has a few niggling image quality issues the overall performance and flexibility on offer makes this an appealing choice for more advanced users and peeping toms alike.

Obviously the key thing to note about this unit is the enormous lens. 20x is absolutely huge and equates to 28mm-560mm in 35mm terms. This means it offers some serious zooming power and also offers wide-angle shooting. It is supported by optical stabilisation and, as usual, Canon has done an excellent job with it. You won’t be able to hand-shoot at maximum zoom but it is extremely beneficial in the 5x-10x range; for anything larger you’ll probably want a tripod.

Despite having a large lens, the SX10 IS performed very well in all our speed tests. It started up in 1.8 seconds, which is exceptional for a camera of this type. Furthermore it focused and zoomed fairly snappily. Its shutter lag was a fairly standard 0.09 seconds, there was a 1.8 second delay between shots and the burst mode captured 2.2 frames per second.

The camera’s images were a little disappointing but had no massive flaws. Sharpness was good, with little in the way of over-sharpening evident and a good amount of detail for a 10-megapixel sensor. Our shots came out crisp and clean and should be fine for most print sizes.

Chromatic aberration was fairly prominent, particularly indoors with some fairly visible high contrast haloing. There was some purple fringing noticeable outdoors too but detail loss in the frame’s corners was kept to a minimum.

Colour balance was pretty typical, with some strong over-saturation in some areas. Reds and yellows were noticeable culprits with overly bright, vivid saturation while blues and greens were better controlled. The overall balance will be fine for those who like lively reproduction; those who don’t will want to do a little tweaking either on-camera or in post processing.

Noise performance was pretty standard. Lately Canon’s cameras have had a habit of producing a fine grain even at low ISOs and that continues here, but it isn’t really noticeable until you zoom in significantly. It isn’t until ISO 1600 that things get seriously blotchy. We’d say ISO 400 would be the maximum for big prints but ISO 800 might be okay in a pinch.

The feature set is quite robust, packing in a full suite of manual shooting modes. Face detection is present along with a host of scene, autofocus, exposure and colour modes. The unit doesn’t offer anything particularly stunning, but there is enough here to appease the amateur photographer.

The design of the SX10 IS will be familiar to anyone who has used an advanced compact before. With a jutting right hand grip and a huge lens it isn’t petite or stylish but it is comfortable to hold and does the job. One feature of note is the rotatable LCD display, which can be flipped out and angled up or down for those tricky shots.