A fantastic snapshot printer for families, though it could be faster and cheaper to run 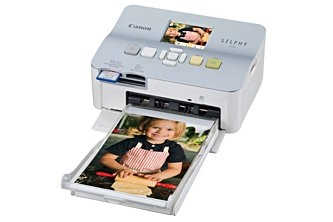 The Canon Selphy CP780 is a cheap and nearly idiot-proof snapshot printer. We just wish it was faster and had a lower cost per print.

The Canon Selphy CP780 snapshot printer has its problems — namely, mediocre speed and expensive, wasteful consumables. But its purchase price is very low (US$100) and its design is simple, making it a good choice for light home use.

Aimed at the family market, the compact CP780 comes in three colours (blue, pink, or silver) and can function with or without a PC. A 2.5in colour LCD and oversize, intuitively labelled control buttons take you through simple editing and special-effects options. You also get the Selphy Photo Print application for creating decorative or calendar formats for your snaps on your PC.

The Selphy CP780's features include three front media slots for CompactFlash, SD Card, MultiMediaCard, and Memory Stick, plus a PictBridge port on the left side. To use xD-Picture Card and other formats, you'll need a third-party adapter. A Bluetooth adapter costs US$50; a rechargeable battery pack costs $80. The front-loading paper cassette holds up to 54 sheets of 4x8in photo paper. To print on 4-by-6-inch photo paper, you must manually push the stack of paper to the front of the tray. The cassette's double-lid design is confusing: You have to lift both lids to load paper, but just one to insert the cassette into the printer. An optional, business-card-size cassette costs $13.

Blame the CP780's drawbacks — its slowness, its wastefulness — on its dye-sublimation printing technology. It creates images by transferring successive layers of cyan, magenta, and yellow dye from a roll of film onto photo paper, finishing with a clear-coat layer. Once a photo is printed, that section of film cannot be reused, regardless of how much dye is left, resulting in a lot of waste. Photos cost a pricey 33 cents each. And because completing a single photo requires four passes, the Selphy CP780 prints slowly, taking about 75 seconds on average (0.8 pages per minute) to finish a 4-by-6-inch snapshot. To be fair, its like-priced competition, the HP Photosmart A536, is even slower, and its photos cost 34 cents apiece; but the somewhat more expensive Epson PictureMate Dash is nearly twice as fast and has a lower per-print cost.

Photo quality varies for the Selphy CP780. Photos of people and objects were a little light-colored but reasonably detailed. On the other hand, a mountain landscape appeared pale and unrealistic, like a bad 1950s postcard.

The Canon Selphy CP780 is a cheap and nearly idiot-proof snapshot printer. It would be our top pick if it were faster and cheaper per print.