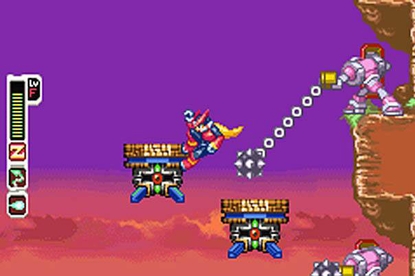 While its forced adventure elements can occasionally overshadow the core Mega Man gameplay, the Mega Man Zero Collection is packed with enough content and classic platforming and shooting action to justify a look from franchise fans.

It's a bit shocking that developer Inti Creates has managed to recapture the special magic of Mega Man in their recent 8-bit styled entries. During their decade-long stewardship of the Mega Man series, they've more often indulged in all the design choices that drove the mainstream away from the Blue Bomber than they did in the dynamic simplicity of the series' classic entries. The four games that comprise the Mega Man Zero series, originally released annually from 2002 to 2005, exemplify those bad habits. They are action platformers in the classic Mega Man mould, smothered by poorly developed adventure elements and collect-a-thon/critter-raising play clearly inspired by the turn-of-the-century Pokemon craze. The series is also steeped in continuity reaching back to the original series and running through the Mega Man X franchise. That Capcom is releasing this collection now is strangest of all; Mega Man Zero is everything recent retro throwbacks Mega Man 9 and 10 are not.

Right. The story, as you can gather from the jargon, is a bit dense.

It's important to note, though, as it sets up the series' core mechanic and chief failing, the game's Cyber Elf system -- Mega Man Zero's answer to Pokemon. It works like this: Cyber Elves are collectible, cherub-faced items found throughout the game, each one boosting Zero's stats or aids in battle - some permanent, some single use. Many have to be "raised" using E-crystals, a currency dropped by enemies. The Cyber Elf system varies significantly throughout the four games; it's at its most cumbersome in the first and streamlined by the fourth. Cyber Elves drag down the action thanks to their random appearance (Zero 1) and the hub-level, talk-to-everyone adventuring and exploration (Zero 2-4) required to catch 'em all.

The action varies throughout as well, each successive entry in the series introducing new armor upgrade systems and weapons. You earn suits of armour and wield a whip in Zero 3; players discover specific body-part upgrades and brandish tonfas in Zero 3; and Zero 4 features collectible components you use to build upgrades. As with the Cyber Elf systems, these features overcomplicate games that should be about jumping on platforms and blowing up robots -- a classic Mega Man staple that ultimately serves as the Collection's triumph. While the DS cart features a few throwaway extras, like a wallpaper gallery and a strange assortment of cheats that only affect Zero 3, its big addition is Easy Scenario, which allows you to play straight through the series with all the Cyber Elves and most major upgrades unlocked from the start. While it makes the games a cakewalk for Mega Man veterans, it allows you to appreciate Zero 1-4 as pure action games. That the collection allows us to revisit the series free of its excesses makes it well worth your time.