Caspio Bridge, like a Microsoft Access on the Web, allows nonprogrammers to easily create online databases and the Web forms to fill them 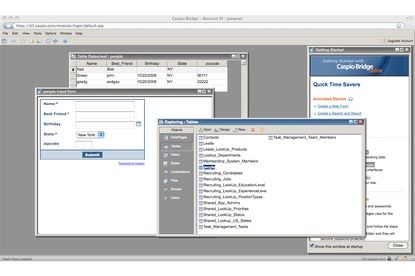 Caspio Bridge's crisp, business-like GUI brings Microsoft Access-like simplicity to building Web databases online. Caspio shines with tight integration with Microsoft Office applications and a clean pricing model. The SQL structure imposed on tables will be welcome to some, but restrictive to others. And while applications are built without coding, many old programmer tricks are still necessary. Table names, for instance, require underscores instead of spaces. The biggest limitation is there's no easy way to add arbitrary logic to Caspio's back end.

Here is where the counter-revolution starts losing punch. Pushing the logic to the client can make security much harder because a malicious person can hijack any extra JavaScript you add to your client. I don't think that this is a real concern for most of the applications built on top of Caspio, but it's something to keep in mind. Caspio does offer a good number of security features, including the option of encrypting your development sessions with SSL.

Loaded and locked in

The lock-in with Caspio can be brutal as it is with most similar tools. Once you build your application in Caspio, you can't really move it. This makes sense, given the business model, which charges nothing up front and a monthly fee afterward. You pay only if your application is successful, and eternal devotion to Caspio is the price.

The costs, though, aren't steep. Caspio encourages unlimited users and measures the sophistication of an application by counting the number of forms and the data stored in tables. By contrast, Coghead and WuFoo count the full-time users, although both are trying to tweak their model to avoid charging for users who visit only occasionally. Caspio avoids the distinction between full-time and casual users entirely.

What is truly surprising about Caspio is how much it feels like a Microsoft product. While there are many programming idioms common in Web applications, Caspio sidestepped most of them and built something that will look very familiar to Microsoft Access users. I did a double-take when I pushed the "edit" button for a page because Caspio took me back to the beginning of the page's configuration wizard. You may be working in a Web browser, but It's just like using Windows.

The underlying data structure will also be familiar to Microsoft SQL Server users; Caspio has SQL Server running underneath everything. SQL back ends are useful for programmers because they make it easier to link the system with other tools that expect to find an SQL database minding the information. The data ends up in a format that's comforting to the DBAs, and all of the unrelenting logic of SQL comes with it. I remember enjoying the fact that Coghead uses a more flexible XML database as the back end because it liberates you from creating a table for every single collection of items.

There are other ways that Caspio will be familiar to programmers and slightly confounding to the nonprogrammers. The look and feel for a data page is built out of CSS and a wizard. Pushing the "deploy" button assembles the parts in much the same way as pushing a "make" button. Other competitors do a better job of building WYSIWYG environments that let casual users plop down a field wherever they darn well please. As a programmer, I like Caspio's solution, but I suspect that the rest of the world may enjoy the WYSIWYG alternatives.

There are several other nice features that Microsoft users will appreciate. Microsoft Office applications can suck down data directly from Caspio using plug-ins. This tight integration lets you tweak the data to create charts and ad hoc reports on your desktop. It's not the same thing as a shell account, but it has some advantages for everyone. Caspio is also expanding the widget tools to make it easier to integrate your data tables with other sites.

The most promising market for Caspio will continue to be the casual programmer from a large Microsoft house. This set includes the people who aren't in the IT department per se, but who can do more with spreadsheets than just fill in rectangles. Many Excel users find they need to a way to make the Web site collect data or display it for the customers. Anyone with a good intuition for how computers work will be able to accomplish this, even if they don't have any formal programming training. The data can then be brought back down to Microsoft applications, where it can be massaged as needed.

Another marketplace may be the curators of large Web sites, such as those for newspapers. These large ships are often hard to steer quickly, and that makes it hard to integrate new forms or data applications. Caspio has a nice, JavaScript-based deployment mechanism that can make its applications look like they live on your Web site. That's a nice trick because it's often hard to do much with these large Web sites beyond including a bit of JavaScript.

Caspio Bridge can do more than just replace desktop databases -- it can also replace parts of Web sites. But that's life during the creative destruction era of Web 2.0. Caspio is a good, solid tool with a polish that will be welcome in many Microsoft houses.