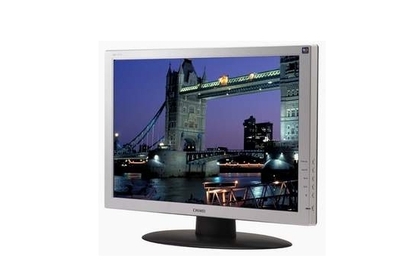 Despite some problems with noise and a brightness limitation, this screen performed well in our tests and is worth considering if you need a big screen monitor.

If you want to be productive, you need a big screen with a high resolution. But at the same time, you probably don't want to spend too much money on a big monitor screen. CHIMEI's 22in LCD screen is a prime example of a large screen that won't cost you a fortune. At $799, it is excellent value because of its vast 1680x1050 resolution which allowed us to position three, open windows comfortably next to each other - great for those design layouts, multiple spreadsheets and the like.

It has VGA and DVI inputs and we tested it using the latter. DVI signals are meant to be free of interference, but in our tests using DisplayMate's Pixel Tracking, the monitor still produced a noisy image. DisplayMate tests also revealed the monitor's brightness limitation. This manifested itself in the dark grey on black test where not all levels of grey were visible. The grey tones also possessed a slightly yellow tinge, as they got darker.

However, in real world testing, the monitor portrayed our test photographs accurately and its colour reproduction was vibrant, yet not overly rich. And despite displaying a lack of brightness in DisplayMate, all photos with dark areas were reproduced correctly and all photos were displayed with good definition. The monitor's contrast proved to be very good in the DisplayMate tests as well as our real world tests - it displayed light colours on a white background very clearly.

For movie watching, the monitor is good, but its high resolution may leave some DVDs looking a little blotchy. Viewing from the sides was adequate and we found the vertical viewing angle to be better from the top than from the bottom.