The Flip MinoHD 8GB isn't the best pocket camcorder on the market. Nevertheless, it provides good video for the asking price and is very user-friendly for beginners.

Having single-handedly spawned the whole 'pocket cam' craze, the Flip brand has enjoyed a respectable lineage. Without it, there would be no Creative Vado, no Sony Bloggie and no Kodak Zi8. (Hell, even the new Apple iPod Touch owes it a debt.) Unfortunately, we can't help but feel this latest iteration of the Flip MinoHD is outclassed by some of its fresher-faced rivals. The lack of removable flash memory and its diminutive LCD screen are especially irksome. Nonetheless, it remains a reliable and beginner-friendly camcorder that's capable of taking great-looking video. It's just not the best in its class.

As befits a pocket camcorder the Flip MinoHD is a highly portable device, measuring just 100x50x15mm and weighing under 100g. It's smaller than most compact stills cameras, but slightly larger than a mobile phone. The standard black version is reasonably stylish in an understated way, though we much prefer the brushed metal finish of the Sony Bloggie Touch MHS-TS20. Thankfully, those after a 'louder' design can choose from a range of colourful skins on the Flip Video Web site. 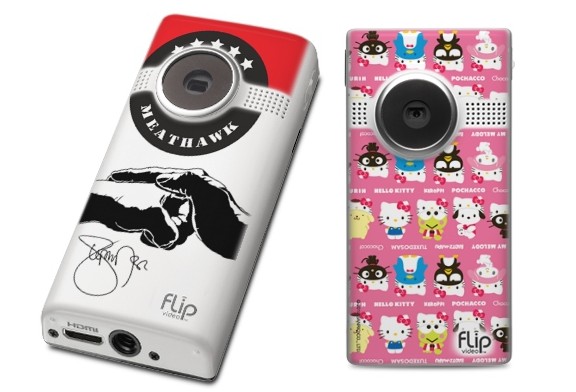 The Flip MinoHD comes in a variety of styles

When it comes to operation, the Flip MinoHD attempts to keep things as simple as possible. There are eight buttons on the device, but only two of these are used during recording. This is a point-and-shoot camera in the purest sense: the only things you have to worry about are the record button and the zoom. If you want your moviemaking endeavours to be as fuss-free as possible, the Flip MinoHD is the camcorder to own.

One of the drawbacks of the Flip MinoHD is the size of its LCD display. It's surprisingly tiny, which can make framing and previewing shots unduly difficult. This is especially noticeable when compared to the Sony Bloggie Touch, which boasts a screen that is around three times larger. 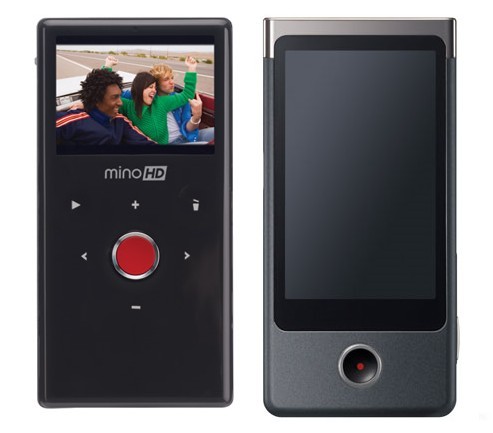 The Flip MinoHD shoots video at a maximum resolution of 720p, instead of the more common (and superior) Full HD. This may sound like a significant flaw on paper, but in reality the difference in video quality is pretty negligible — especially if you're uploading your clips to Facebook or YouTube. Still, it would have been nice to have a 1080p option for HDTV playback and the like.

To test the Flip MinoHD's video performance, we shot footage in a variety of lighting conditions and previewed the results on our high-definition PC monitor. In our optimum lighting shots, the Flip MinoHD produced exceptionally sharp and pristine video. However, the camera's 1/4.5in CMOS sensor began to struggle in moderate lighting, with image noise muddying the picture significantly. Like most pocket cams, the Flip MinoHD requires plenty of sunlight to produce flawless video. On the plus side, the integration of a new-and-improved image stabiliser helped to keep our footage steady during testing.

Curiously, the Flip MinoHD does not have a stills mode; a feature that practically every camcorder on the market offers. In other words, you'll need to keep your camera or mobile phone on hand for those impromptu Facebook snaps.

Unlike most pocket camcorders, the Flip MinoHD 8GB does not come with a memory card slot for hybrid recordings. This means you're stuck with the 8GB of inbuilt storage, which will net you around two hours of HD video. We think this is a serious oversight on Cisco's behalf (who wants to transfer their footage to a PC every two hours?) By contrast, the Sony Bloggie Touch MHS-TS20 supports both Memory Sticks and SDHC cards, which boosts the potential storage space by 64GB. 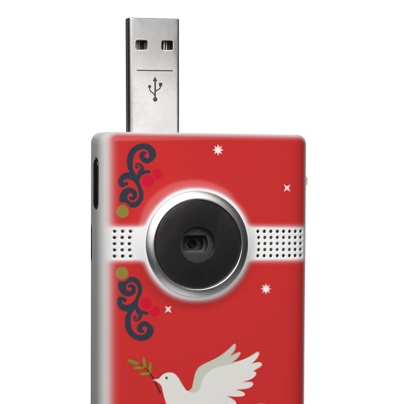 Compounding matters further is the fold-out USB arm. It's far too short and unwieldy for our liking, especially when using a desktop PC. Unfortunately, the lack of removable memory means it's the only way to export video.

For our money, the Sony Bloggie Touch MHS-TS20 offers better overal value than the Flip MinoHD. However, if you're looking for a point-and-shoot camcorder that is incredibly easy to use, this affordable pocket cam is pretty hard to beat.