The Clickfree C2N is a wonderfully simple external hard drive that can back up multiple computers on your home network. You don't have to fiddle with its settings and you don't even need to know much about networking. We think it's an easy solution for backing up data from netbooks, for example, and we love its ability to back up music files from an iPod or iPhone.

Note: although we looked at a 250GB drive, the Clickfree C2N Automatic Home Backup will be available from 500GB in Australia.

The Clickfree C2N Automatic Home Backup is a USB 2.0–based external hard drive that can be used to back up multiple computers over a network. It has preinstalled backup software that makes this task painless, and the drive is available in capacities ranging from 250GB to 2TB. We looked at the 250GB version, which is perfect for backing up a netbook and a main PC, for example; depending on how much data you have a larger capacity drive might be the order the of the day.

The 250GB Clickfree C2N looks just like any other 2.5in-based portable external hard drive, except that it has a permanently attached USB cable. It doesn't require a separate power source as all the power the drive needs can be delivered by your computer's USB 2.0 port. There is a mini-USB port on the Clickfree's case that can be used to plug the drive in to the supplied docking cradle, which is handy for keeping the C2N permanently connected to your main PC so that you can schedule backups. Of course, you could also just use the mini-USB port to plug in your own, long USB cable if you wish.

The aim of the Clickfree C2N Automatic Home Backup drive is to take the hassle out of backing up data from multiple computers, and it succeeds. The first time you use it, you have to tell Windows' Autorun what to do when you plug in the drive (run Clickfree backup) and then you have to update the software before you can run it. Once the update is complete, you have to unplug and then plug in the drive to run the Clickfree backup software. That's as complicated as it gets. 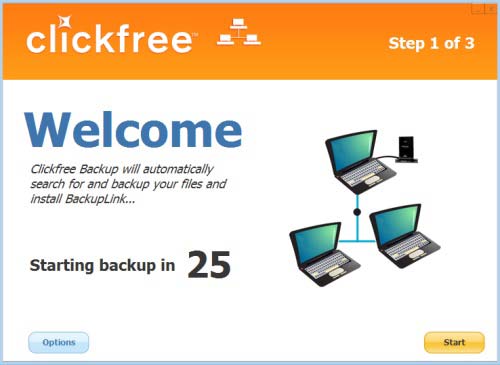 The Clickfree backup software scans all the drives on your computer for data files that can be backed up — it won't back up system files. Files it will back up include photos, documents, music, Web favourites, e-mails and videos, as well as any other types of files you may have. If all of your data exceeds the space on your Clickfree drive, you'll have to customise the backup on the next screen so that only your most important files are backed up. 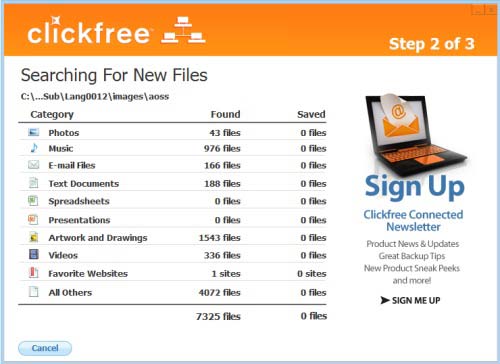 The main backup interface as it searches for files.

To backup multiple computers on your home network, you have to plug the C2N drive into each of those computers and go through the same process mentioned above. In addition to backing up your computers, the drive installs software called BlackupLink, which is the software that will allow the C2N to see all the computers on your network and back them up.

Networked computers can be backed up to the C2N as long as the C2N is plugged in to one computer on your network and all your computers are switched on and connected to the network. For example, we had the C2N plugged in to our main PC and, via our wireless network, it was able to back up files from our netbook. Because the C2N works over the network, backing up lots of data from wirelessly attached notebooks can take a long time, but the main, initial backup of each machine is done when you plug the C2N into each computer's USB 2.0 port; each subsequent backup over the network will be incremental. 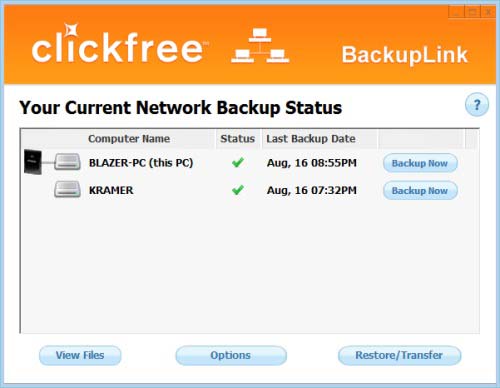 The BackupLink software creates visual links to backups made on different computers so that you can easily find and restore data from specific computers. 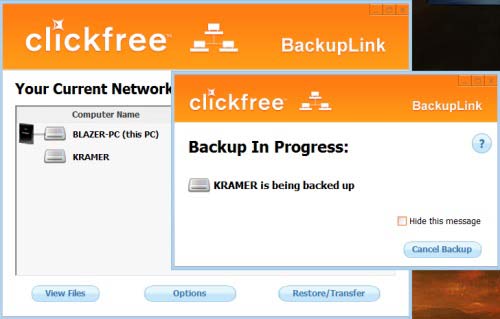 Backing up a netbook over our wireless network.

You can restore files to another computer by using either the Quick Restore or Advanced Restore options. Quick Restore will basically plonk all the files from the Clickfree hard drive back onto your computer, while Advanced will let you pick and choose which files you want to restore; you can also select the restore destination if you don't want to use the original location. If there isn't enough space on the new computer to restore your files, the software will tell you.

Password protection is also supported by the Backuplink software, and you might want to use this if there is a chance your Clickfree drive could get lost or stolen — such as if you take it on the road with you. When you plug in the drive again (to the same or a different computer) you'll have to enter the password before you can use the Clickfree software. Furthermore, you won't be able to browse any files that are backed up on the drive; without a password, you can easily browse the location of your backups and drag and drop files from the Clickfree to your computer.

In our tests, a backup that filled the entire 250GB drive over USB 2.0 took 2hr 30min and it occurred in the background while we continued to use the computer. If you leave the drive plugged in to the computer, then Clickfree will continue to back up files according to a schedule (you can set this manually), as long as your computer is switched on and there is space left on the drive.

Backing up your computers isn't the only thing the Clickfree drive can do. Similar to the Clickfree Transformer SE cable, if you use an iPod Classic or iPhone you can use the Clickfree software to import music and video files from those devices to your computer. You can then access those files locally instead of having to plug in your iPod/iPhone. It's a very convenient feature for anyone who's ever wanted to copy music from their iPod to a computer. 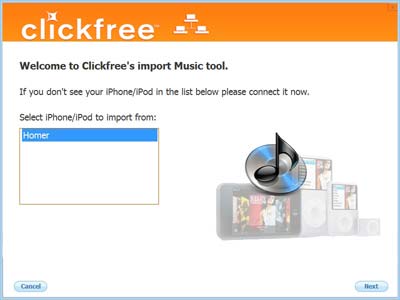 The 250GB Clickfree C2N Automatic Home Backup drive performed all of its intended tasks as expected during our tests and it's a nice and easy solution for anyone who finds it difficult to maintain data backups for more than one computer. It does have a high cost per formatted gigabyte, but you are paying for a complete backup solution and not just a plain Jane drive.