The Clickfree Transformer SE dongle will allow you to easily back up data onto any external USB 2.0 hard drive The Clickfree Transformer SE is a simple cable that can turn any external USB 2.0 hard drive into a backup device. It can automatically back up your data as soon as you plug it in to your computer and it requires practically no user intervention to work. Even if you have to fiddle with the Clickfree software, it's very easy to use. Basically, if you want a simple to use backup solution, this is it.

The Clickfree Transformer SE (Special Edition) cable can turn any USB-based external hard drive or iPod into a simple backup solution. The cable itself is tiny, and a dongle on the end has the Clickfree backup software built in to it. There's no messy software installation and no need to configure anything, so it's perfect for users who don't know much about how to keep their data backed up.

When you plug the Clickfree Transformer SE into your computer and then attach a USB drive to the dongle, the Clickfree backup program launches automatically. It scans your computer for data files (it won't back up your system files) and then backs them all up if there is enough space on your attached drive. It's a very simple process that requires little to no user intervention — however, it could take a few hours to back up your data depending on how much you have. You can let it run in the background while you continue to use your computer for other tasks.

Each time you plug in the Clickfree Transformer SE it will search for new files and add them to your backup. If you leave the cable always plugged in to your computer then you can install reminder software so that you don't forget to periodically back up — it also has a scheduler you can use. 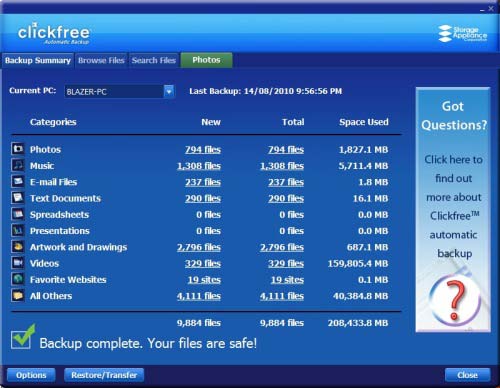 The Clickfree Transformer SE can back up common files types and it's very easy to use.

If there isn't enough space on the hard drive you've attached then you will have to use the advanced features of the Clickfree program to select only your most important files. We used a USB 3.0–based, 500GB Buffalo portable external drive for our tests and it worked flawlessly with the Clickfree transformer SE cable. The cable can also work with an iPod or iPhone in addition to external hard drives. Our iPod Classic worked just fine with it. However, if iTunes is running when you connect the iPod then the Clickfree software will automatically close it. 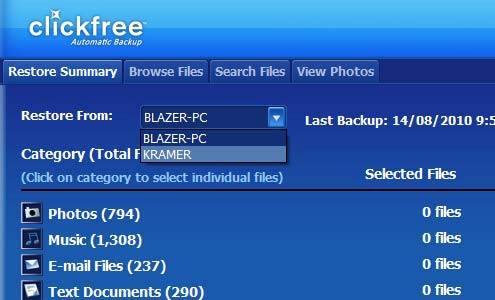 A dropdown list lets you easily choose to restore data from multiple computers.

You can back up multiple computers using the same drive simply by plugging the Transformer SE cable and drive into each computer. When you need to restore data, the Clickfree software interface will allow you choose your computer from a dropdown list, so it pays to know the name of each computer you've backed up. Data restoration is as easy as the back-up process: click the Restore/Transfer button from the main screen, select the computer backup you're after, and then either restore all the contents or select specific files and folders.

Another useful feature of the Clickfree cable is its ability to copy music from an iPod or iPhone to a computer's hard drive (it uses the freeware application Freepod to do this). You can elect to copy either all the music off the device, or you can go in and specify only the albums and songs you want. It's a great feature that makes it easy to transfer your music collection to a new laptop, for example.

The Transformer SE doesn't support password protection, but since it's a solution for the home we're not too fussed. In fact, we quite like the Clickfree Transformer SE and think it's a very neat solution for maintaining backups. It makes it easy to back up and restore common data file types and we also like its ability to back up music from iPods and iPhones.