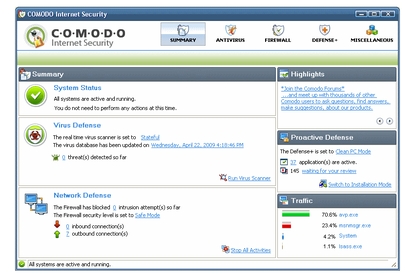 Our experience with Comodo Internet Security's antivirus component leaves us little reason to recommend it. Other pieces of free antivirus software do much better at protecting a PC. Comodo's firewall might be useful (again, we didn't test this feature), but its antivirus is definitely not.

While we can't speak for the firewall's effectiveness (we didn't test that feature), Comodo Internet Security's antivirus component leaves much to be desired.

After downloading the Comodo Internet Security package, you can choose to install the antivirus app, the firewall, a 30-day trial of Comodo's LivePCSupport, or any combination of the three. We installed only the antivirus portion. Considering its results in AV-Test.org tests, though, you probably won't want to install it on your PC.

Comodo Internet Security fell flat in detecting malware. Only PC Tools Antivirus Free Edition (which purposely fails to detect what PC Tools considers spyware) and the not-ready-for-prime-time ClamWin Free Antivirus did worse than Comodo's 74.6 percent malware detection rate. Letting one out of four invaders go unnoticed just doesn't cut it. Comodo also neglected to catch some samples in the WildList test, a low-level baseline that uses known malware; most antivirus apps catch all of the WildList set, but Comodo missed a lot.

Worse, Comodo Internet Security issued a huge number of false positives. In our tests, it flagged 62 pieces of harmless software as malicious. The next worst app, ClamWin, produced 6 false warnings, and some rival products had none.

The product's installation also leaves a bad impression. By default Comodo Internet Security installs an unnecessary Hopsurf social networking browser toolbar, and it prompts you to change your default search engine to Ask.com and your home page to Hopsurf.com. Displaying ads for a paid app in a free product, as some of the other tested programs do, seems justifiable. But attempting to change the user's search engine and home page is excessive, even though the user can turn off the options.

Also annoying is Comodo Internet Security's Defense+ layer of security, which feels like a throwback to an age when security tools repeatedly prompted you to decide whether a particular program could take a certain action, such as creating a folder or changing the Registry. Such protection can be effective if you're willing to deal with countless interruptions and risk making a bad decision, but you'd probably end up disabling it instead.