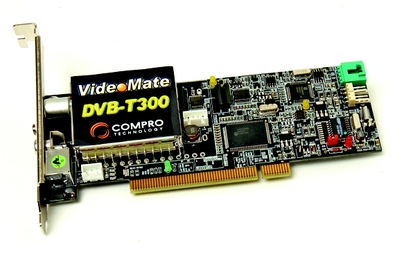 This card is great value considering its versatility.

Capable of picking up analog signals in addition to digital TV signals, the DVB-T300 is a versatile and inexpensive card. Analog and digital TV cannot be watched at the same time, of course, but analog reception can be used in instances where digital TV transmission is poor, and vice versa. A cool feature of its software interface allows you to switch between analog or digital reception at the click of a button. It also has composite and S-Video input, which allows you to record video directly from your VCR, for example. In our tests, it performed this function very well.

This card also stands out for its ability to power up your PC. To schedule a recording for a time when your PC is shut down, you must first schedule a computer power-up, and then you must add a recording schedule. The card can power up your PC because it has a pass-through for your front-panel power connector. Instead of plugging this connector directly onto your motherboard, you must plug it into the DVB-T300, and then plug a patch cable, which is supplied, from the card to the motherboard.

The scheduler is part of a program called ComproDTV. It has an easy-to-use interface, similar in layout to what you may be used to with PowerDVD or WinDVD, but some functions, such as timeshifting, are hidden from view. To timeshift, you must right-click in the program window and select it from the menu to enable it. Then you will be able to pause live TV from the main control panel. By default, the program will timeshift data for 10 minutes, although this can be adjusted within the program's settings.

ComproDTV is much easier to use with the remote control. We had no problems controlling the DVB-T300 from the couch, although we did have to fiddle with a jumper setting to make the infrared interface usable. By doing this, we affected the card's ability to automatically power up the system. It appears you can't have your cake and eat it too.

The performance of the card was impressive. Its picture quality was excellent during TV watching. Recorded programs played back in very good quality using PowerDVD, although some recorded programs did suffer from audio synchronisation problems, possibly due to signal break-up during the live transmission.

At the time of writing, ComproDTV had recently been updated to version 2.6.0.7, which is the version we used for testing.