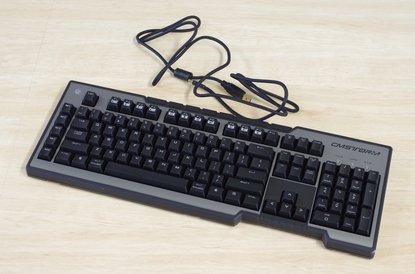 The CMStorm Trigger keyboard by Coolermaster is based on mechanical switches (Cherry MX Blue in this case). It's solidly built, comfortable to use, offers useful macros and backlighting and it looks quite good, too. It's worth considering if you're an avid gamer.

The CMStorm Trigger (by Coolermaster) is a full-sized, 104-key mechanical-switch keyboard that has been designed for gaming. The review model I looked at features Cherry MX Blue switches for the keys, which sport a tactile and "clicky" keystroke. They do create a bit of a racket in the ears of some, but for gamers who wear headphones this won't be an issue — the sound may bother housemates during all-nighters though.

The construction of the CMStorm Trigger is solid, and it's certainly a weighty piece of kit at just under 1.3kg. It will happily stick to your desk during even the most intense deathmatches, thanks to its non-slip rubber base, yet it can also be easily transported to LANs thanks to its removable, braided USB cable and its rigid, scratch-resistant construction. The key switches are rated to handle 50 million presses each, so it'll take some serious effort to wear them down. A two-port USB 2.0 hub lets you charge devices without running extra cables to your rig, but it does require an external power input. While the Trigger has a full-sized, 104-key layout, if you're looking for a more compact, tenkeyless model, the CMStorm QuickFire Rapid keyboard is an alternative, albeit without macro shortcuts.

The keyboard is girded with a black, scratch-resistant TPE-like plastic and has a gunmetal grey faceplate. Its design harks back to older "clicky" keyboards with its angular looks and high keycaps, but it definitely has a gamer touch to it. It fits right in with the matte black/gunmetal designs of my Logitech G9x Laser gaming mouse and ASUS G53 notebook.

The LED lighting on all the keys is a deep red that didn't distract me from the screen, and keys could be easily found during hails of gunfire. It has a few modes: off, steady lowlight, on with pulse, and FPS mode, which lights up only the macro, WASD and cursor key groups. The shifted characters (such as the @ symbol and the semi-colon) are pretty dim though. 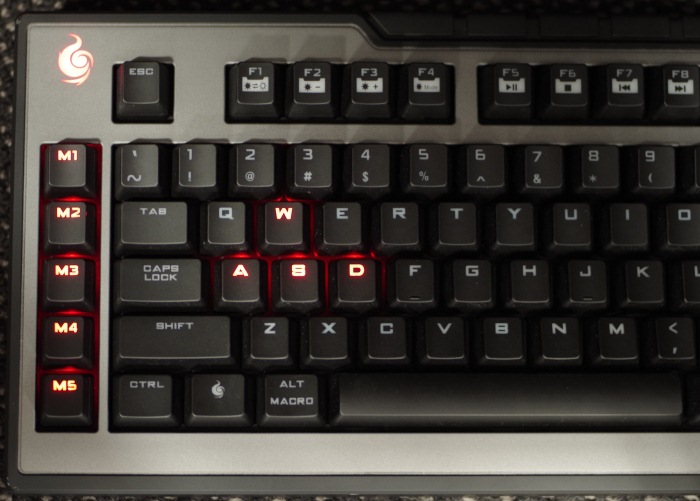 A macro is used to light up only the WASD buttons.

Not just for gaming

Despite this hardware being designed for gamers, I started using this keyboard for programming while at the office; I enjoyed the feel of older mechanical keyboards such as the IBM Model M and the Apple Extended Keyboard so I was excited to try out a newer model. It got me some attention from my team, who could hear me clacking away at the board, though we're no strangers to "clicky" keyboards — I sit next to a testing machine equipped with an SGI keyboard. One thing became obvious very early on, however: I found that some of the modifier keys such as the backspace and shift keys were spongy, with a slower rebound compared to the alpha keys on the board. I suspect that with more use these will wear-in.

Gaming: what it does best

The board works just fine without any drivers installed, though you can install the Trigger App (most recent version at 1.1 from the CMStorm website. I used this keyboard to play Diablo III, but with that being more of a mouse-reliant game I moved on to Starcraft II instead. I found that I didn't have the same tendency to spam keys like I do on a laptop or rubber-dome keyboards — on the Trigger, I knew exactly when I had hit a hotkey. It's no wonder professional gamers like these keyboards. Many livestreamers use them despite viewer complaints, though you can always opt for one of the quieter MX Black or Brown models.

I really like the travel and click of each keystroke on the CMStorm Trigger — it makes typing a real joy. For anyone without a mechanical keyboard, I'd recommend this one or its little brother from the Quick Fire Rapid range (if you want a more compact layout without the macro support). It is competitively priced against existing mechanical gaming keyboards, and the only thing I can fault it for is the spongy modifier keys.

The sound of the CMStorm Trigger's Cherry MX Blue switches.