The QuickFire Rapid is a mechanical keyboard designed for gamers Before we get into the nitty-gritty of how mechanical switches work, and why they’re better than traditional rubber-dome pads, a few words about the CMStorm QuickFire Rapid’s design and build quality.

The CMStorm by CoolerMaster QuickFire Rapid gaming keyboard, to use its full title, is a 87-key, ‘tenkeyless’ model. That means it doesn’t have the 16 extra num-pad keys (0-9, /, *, -, +, ., Enter, and Num Lock) that a full-size keyboard has. The theory behind this is that by cutting out these not-so-commonly-used keys, a gamer is able to move their mouse over a wider range of motion.

I’ve never had a problem with keeping mouse and keyboard apart, but we can see the advantage of a tenkeyless keyboard in that it’s more compact on a keyboard tray and gives more room for the mouse to move — useful if you’re gaming with mouse sensitivity turned down for accuracy’s sake and need a large range of motion.

The key layout of the QuickFire Rapid.

The QuickFire Rapid isn’t as minimalist as the Das Keyboard Ultimate, but it’s not as gaudy as some other gaming keyboards we’ve seen — I’m looking at you, Razer. There’s a single CMStorm logo and two spiral flame logos on the keyboard’s body above the direction keys, while another two flame motifs also cover the Windows keys.

QuickFire branding marrs the space bar somewhat, and the F5-F12 keys look busy thanks to extra functions (media playback, volume and a lock button), although these particular extra features are useful and welcome. Beyond that, the QuickFire Rapid is a simple and basic-looking keyboard. The Caps Lock and Scroll Lock keys have red LEDs hidden underneath that light up when each key is toggled on — an obvious indicator that you’re about to type as if you’re shouting, or about to do whatever Scroll Lock does.

The CMStorm QuickFire Rapid comes with a plastic-braid-covered mini-USB to USB cable. The cable can be routed three ways from the keyboard’s under-side, coming out in the centre or at either end of the peripheral’s body. On the QuickFire Rapid’s back, you’ll also find two flip-out legs that boost the rear of the keyboard, tilting it towards the typist. 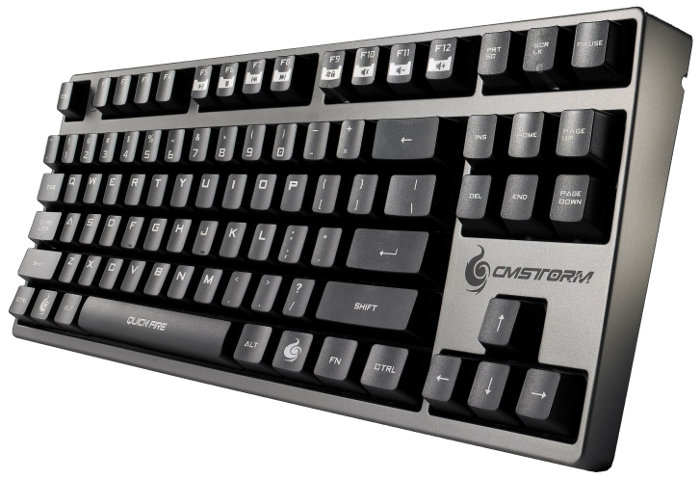 The CMStorm branding on the keyboard's right front.

CoolerMaster includes several replacement keys — CoolerMaster-branded Windows key replacements, and red WASD keys for gamers — as well as a key-puller in the bundle of the CMStorm QuickFire Rapid. There’s no software included since the keyboard can’t be set up to run any macros — a little disappointing for gamers that might like to set up routines for their favourite games.

Here’s an excellent guide to mechanical keyboards that sets out the difference between the various kinds of Cherry MX switches. It gives a perfect and concise explanation of the construction of mechanical switches, so read it if you’re considering buying a new keyboard.

The CMStorm QuickFire Rapid can be bought with either Cherry MX Red, Blue or Black switches. The particular keyboard I tested used Cherry MX Red key-switches, which are optimised for gaming — they’re not tactile (so are less clicky) and the lowest activation force of any mechanical switch, which should make them easy to hit multiple times successfully in quick succession.

In practice, I found the QuickFire Rapid more appropriate for gaming than long typing sessions, but with a little practice it’s better for either of these purposes than a cheaper rubber-dome keyboard.

Using a keyboard for gaming generally means holding keys down, instead of only tapping them when you’re typing, and switching between keys quickly — as you change the direction you’re moving in a first-person shooter like Battlefield 3, or to spam hotkeys for building and selecting units and structures in a real-time strategy like StarCraft 2. Keypresses are also harder in gaming, usually hitting the bottom of the key’s travel. In both of these situations the MX Red version of the QuickFire Rapid excels: the light actuation means it’s easy to hit and switch between keys, and when each key bottoms out you know you’ve hit it.

Typing is more of a mixed bag than gaming, with the feel of some keys not as typing-friendly as they could be. For example, when I type, I tend to make a lot of mistakes and use the Backspace key a lot. The linear feel of the MX Red switches means pressing the key in quick succession feels slightly strange — because it’s not tactile, there’s no definite point at which you know you’ve pressed the key. The actuation point of the keys are halfway down the key’s travel, so it’s possible to tap each key lightly for a key-press rather than hitting it until the bottom of its travel.

With a little practice, though, typing becomes easy and the non-tactile feel isn’t an impediment. If you’re mostly going to be using this keyboard for typing we’d probably opt for the Cherry MX Brown model — the Blues (like on the new Trigger) feel great but have a very loud click — but for a combination of mostly gaming and some typing, the Red is perfectly usable.

The CMStorm is reasonably cheap for a mechanical keyboard, and it comes in a variety of Cherry MX key-switches. It’s not especially gaudy, but some might find its look a little busy. The keys are great for gaming and OK for typing after some time and practice.

As an entry into the complicated world of mechanical keyboards, the QuickFire Rapid is a solid choice.