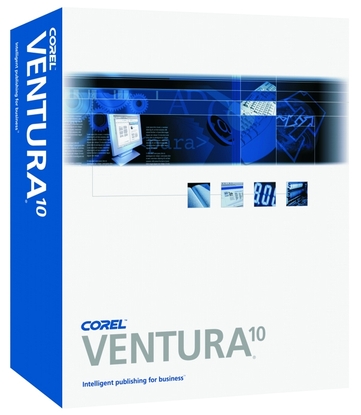 For the first time in many years, Ventura actually feels like a robust and powerful challenger to the high-end DTP packages from Quark and Adobe.

PageMaker might be the program that coined the expression ‘desktop publishing’ (DTP), but the original page layout software for personal computers was, in fact, Ventura Publisher. In the mid-1980s it was developed by Xerox and ran under a pre-Windows, early-DOS, graphic interface called Gem. Despite a loyal user base and backing by new owner Corel, the product has increasingly lost ground to other DTP packages over the years. But with Ventura 10.0, Corel may just have hit on a version that could, deservedly, revitalise its fortunes.

For readers unfamiliar with the program, here is a quick run-down. Ventura is a page layout package intended primarily for business publishing. Despite enjoying certain graphics tools nabbed from the CorelDraw engine, such as Bezier vector editing and special object fill styles, its strongest features concern the management of long documents with complex indexes, footnotes and so on. It is ideal for preparing textbooks, manuals and general technical documentation, favouring production management over freeform graphic design.

Now, with version 10.0, Ventura is pushing further into the high-end FrameMaker territory. Key to Ventura’s rebirth is its handling of data in XML format, which the major publishing houses and newspapers are already using to archive and repurpose content. This means Ventura can now join the big league where text and graphics are tagged up and stored in XML databases ready for simultaneous publishing to print, Web and electronic publications.

Ventura’s implementation includes an XML Mapping Editor which maps XML tags to a Ventura document’s own style sheets (slightly confusingly, also known as ‘tags’). This means you don’t necessarily need external DTDs (document type definitions) to validate the XML, just as long as it is well formed. However, it is a one-way process. Unlike the XML features in FrameMaker 7.0, or QuarkXPress 5.0 and Adobe InDesign 2.0 for that matter, Ventura 10.0 does not allow you to mark up a document with XML tags for export -- it can only import XML. Corel’s thinking is true XML workflows start with text and graphics created outside the page layout program -- but this does mean someone will need to do all the tagging with an external XML editor, such as XMetal 3.0.

Still, it _pconnect("user= is no ‘round-trip’ support for XML, especially since you can export other electronic data formats from the program. Ventura 10.0 can publish files directly to HTML and CSS formats for standard Web and CD-based electronic documentation. It now also exports to Acrobat PDF, maintaining embedded page and Web links on the way and converting tables of contents and indexes to PDF bookmarks. This is all built-in: you do not need your own copy of Acrobat Distiller. You can also optimise the PDFs for print production, embedding page bleed marks and so on, and bring PDFs into your layouts as individual graphics.

Our only major disappointment with the PDF support is its limitation to the PDF 1.3 (Acrobat 4.0) format. Of course, certain aspects of PDF 1.4 (Acrobat 5.0) format would not be supported in Ventura 10.0 anyway, such as object transparency. Another missing feature, which would have been extremely useful, is the ability to assign encryption to protect exported PDFs from being changed without permission. This is essential for all commercial publishers of electronic documentation.

Very much in Ventura 10.0’s favour, though, is a built-in preflighting engine. ‘Preflighting’ is jargon for a routine of automated checks on a document about to be output, ensuring that nothing is missing or in the wrong format. This is an enormous time-saver, especially if you are about to sign off a 700-page manual based on multiple chapter files. The preflighter appears as a tab in the Publish To PDF and Print dialogue windows, alerting you to common issues, such as missing fonts, picture problems, page irregularities and so on. The list of checks is not comprehensive, but our output tests showed that documents passed by Ventura 10.0 were also passed by industrial prepress preflighters.

Ventura 10.0 also introduces the concept of tags (style sheets, remember) for tables. This means you can import or manually set up tabular data, then apply a table tag for immediate top-to-bottom styling for the entire object. Ventura tables also sport highly valuable real-world formatting features, such as slanted top rows and, unlike QuarkXPress, allows you to hide row and column lines completely.

Less obviously useful, although still impressive, is the way you can now apply filter effects to placed bitmap images directly in your pages. No commercial publisher in their right mind would trust these on-page filters in preference to editing the original image in Photoshop. Perhaps it is intended as a bit of fun and for convenience in more mundane projects, such as in-house publications or electronic documents not intended for print.

Beyond these new functions, there are many existing features in Ventura 10.0 which we continue to adore, such as CorelScript macro recording (similar to Photoshop Actions), the Navigator (which lists embedded and imported objects per page across multiple documents in a publication), the Equation Editor (for mathematical layouts) and the curiously usable Tag Window (for managing character, paragraph, table, frame and all other style sheets).

Additionally, plenty of small background utilities, such as the new, intuitive colour management interface are welcome, and we can’t possible turn up our noses at the 1500 TrueType and Type 1 fonts included in the box. We are also very pleased to see Corel finally embrace proper PostScript-clean output to replace the previous quirky implementation, now even supporting Adobe’s In-RIP Trapping system.

Corel must now demonstrate an appreciation of the kind of user Ventura 10.0 is aimed at and temper the program’s features accordingly. Ponytailed graphic designers will probably hate its regimented approach to column layout and lack of support for transparency or OpenType fonts. Everyday users might be confused by the extensive functionality. But project managers, production staff and technical editors will like its powerful control over complex content. For the publisher of meaty content, Ventura 10.0 could be just what you are looking for.

Corel Ventura 10.0
3 ½ stars
For the first time in many years, Ventura actually feels like a robust and powerful challenger to the high-end DTP packages from Quark and Adobe. Its renowned handling of long and complex documents is now boosted with better PostScript support, built-in PDF and Web output, more prepress features, and integration with XML databases. As a designer’s program, however, it is a bit limited by today’s standards.
Price: $1389; Upgrade $499
Phone: 1800 658 850
URL: www.corel.com