The Corsair Flash Voyager Mini 32GB packs a lot of data in a small shape, but still offers good value 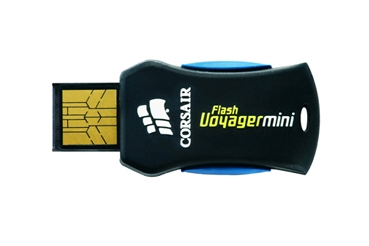 If you need copious storage on something smaller than the keys on your keyring, check out this resilient little stick from Corsair. The Corsair Flash Voyager Mini 32GB packs a lot of data in a small shape, but still offers good value.

When we last looked at the Corsair Flash Voyager Mini, we were taken back by its capacity. At only 33x20mm and weighing under 6g, it seemed amazing that you could squeeze 4GB of flash storage into something so small.

A year or so later, and the self-same rubbery memory stick has grown internally - by eight times the capacity. So now the Corsair Flash Voyager Mini can be found in 4GB, 8GB, 16GB and 32GB capacities. We tested the 32GB version.

Externally, nothing has changed; the Corsair Flash Voyager Mini 32GB still has the same retractable slide acting as a naked USB plug contacts, with the NAND flash modules attached to this sliding tongue.

Writing dropped significantly to just 4.9MB/s in the HD Tach quick test using 4K blocks, but rose again to a more respectable 7.5MB/s in the longer 32K version of the drive benchmark test.

On balance, it’s a case of swings and roundabouts in performance. In broad terms, its write speed has dropped by around 50%, although its write speed has increased by roughly the same amount. These figures are all still on a par with many such USB 2.0 flash drives.

But regardless of its data transfer performance, there’s no denying the huge amount of data that can now be dangled from the Corsair Flash Voyager Mini 32GB’s little string lanyard.