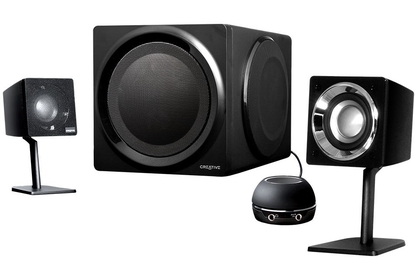 Compared to a conventional two-box stereo speaker system, a 2.1 sub/sat setup means you can reap the benefits of smaller-looking speakers – although there will still be a nest of wiring to contend with. The Creative GigaWorks T3 is a well-designed example of what you can do with the principle, and undoubtedly one of the finest sounding compact PC systems available today. Available now for less than $400, it fully deserves a hearty recommendation.

As sub/sat systems go, the Creative GigaWorks T3 system is certainly quite compact. But it also offers one of the best overall sound qualities from the breed of PC stereo speaker systems you can find.

It all starts with a small and boxy sub-woofer, around 10in cubed, adding a remotely placed pair of single-driver satellites, these perched on fixed stands with spindly pillars. The Creative GigaWorks T3 sub features no less than three separate bass woofers, one firing forward and one on each side panel — the trio of which might explain the system name.

But only the forward-most unit is actually connected to any amp. The side drivers are actually passive drivers — otherwise known as auxiliary bass radiators (ABR) in serious audio circles — and contribute to an extended and powerful bass response.

Inside the Creative GigaWorks T3 bass box are the electronics, including a 50W amplifier for the woofer and a stereo amp rated at 15W per channel to drive the satellites. To keep efficiency high and waste heat low, these are all Class D amplifiers, often erroneously dubbed ‘digital amplifiers'.

You won't find these used in audiophile systems, but for mainstream audio and home entertainment applications, they are becoming increasingly popular.

But the Creative GigaWorks T3's black box and its contents will ordinarily be hidden from view, leaving the mid- and high-frequency baby speakers on the desk, along with a wired remote control unit.

This rounded knob allows an easy and weighted mastery of volume. In its base you'll find two mini jacks, one for headphones, the other an additional line input. This makes plugging in a portable MP3 player much easier than rummaging on the floor for a socket.

Where many sub/sat systems fail is in the believable integration of the bass speaker to the midrange reproduction of the satellites. The Creative GigaWorks T3, while not exactly winning this war, fought a good battle by fooling the ear that there was a good knit going on. Perhaps it was the ‘correctness' of the mid and top frequencies that made the usual omission that much more forgivable.

We found we had to turn the bass control knob to its absolute minimum setting to get a natural balance, and even then it could be a bit too bass heavy in some modern music productions. But we were then rewarded with quite tight and tuneful bass, all securely underpinning the sound from the satellites.

The inviting quality of the Creative GigaWorks T3 system's sound presentation was helped by the use of a single driver, rather than a two-way speaker, which inevitably suffer a little from phase errors.

This is due to the crossover filter network, which splits the sound into mid and treble frequencies for the respective drive units. Get the finished speaker more phase linear — much easier with but a single driver — and the sense of space in a soundfield will be that much more realistic.

The downside is often that the highest of frequencies will be a little subdued, as you might expect when asking one tiny speaker to reproduce over six octaves of sound; but overall the Creative GigaWorks T3 could conjure up a smooth and mellow sound, dimensionally deep with some quite convincing stereo imaging.

While top-end treble sparkle was not as well defined as with a speaker using a separate tweeter, this had the effect of softening the grain of less than stellar-sounding music sources, while hiding the inherent grain of Class D amplification.

Meanwhile, the Creative GigaWorks T3 bass speaker proved aptly profound in extension, yet suitably taught and well-timed, able to stop and start sufficiently precisely — and with ample kick when called upon from acoustic drums. It could also play a well-pitched thrum from the steady pedal notes of keyboard synths.

Compared to a true hi-fi setup, the Creative GigaWorks T3 may have shown a lack of real transparency to the original music, for sure, but overall tonality was rated good, with no serious vices in the ‘voicing' of this sytem.

Compared to a conventional two-box stereo speaker system, a 2.1 sub/sat setup means you can reap the benefits of smaller-looking speakers — although there will still be a nest of wiring to contend with. The Creative GigaWorks T3 is a well-designed example of what you can do with the principle, and undoubtedly one of the finest sounding compact PC systems available today. Available now for less than $400, it fully deserves a hearty recommendation.