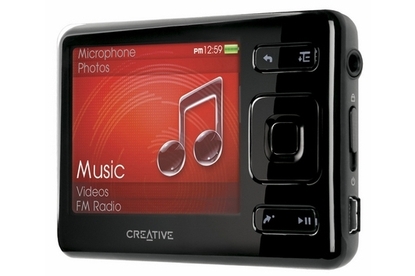 A decent showing from Creative, but the Creative Zen 4GB suffers from comparison with Apple's ultra-desirable iPod nano. Video playback and the SD Card slot are plus points, however.

How different life would be if Apple hadn't made its foray into the world of portable audio. Creative's Zen 4GB, for example, is the sort of commendable digital audio player that would make serious waves in an iPod-free world. Indeed, we were thoroughly impressed when we opened the deluxe packaging -- until we placed it alongside Apple's most recent nano.

The Creative Zen 4GB is a neat-looking, portable device that fits comfortably in a trouser pocket. It's also reassuringly robust. Creative has gone for a gloss finish on the front and matte on the back for a fairly pleasing look that combines attractive shine with a non-slip grip. Yet the Creative Zen 4GB still looks cheap compared with the nano, which costs the same amount at this capacity.

The Zen's buttons are easy to use, but they have a distinctly plastic feel to them -- not the worst crime in MP3 player history, but a black mark. The whole impression made by the Creative Zen 4GB is of a product that's competently put together but a year or two behind the nano.

Nonetheless, the slightly outdated-looking Creative Zen 4GB does everything you ask of it. The interface is simple and effective -- the hardware layout, once again, lacks the clean minimalism of the iPod, but it gets the job done. There's no dedicated volume button -- a bugbear of ours -- but since this function is accessed by the rarely used up and down keys rather than a scrollwheel, the chances of a volume accident are reduced.

There are a couple of areas in which the Creative Zen 4GB gets its own back on the nano. First, it has a larger screen -- 2.5in rather than 2in -- although it has the same resolution (320x240), which means the iPod feels distinctly sharper in general use.

The larger screen is just about enough to make video playback a feasible option on the Zen -- any sort of prolonged video watching on the nano is liable to instigate a headache -- and it proved adept at playing sharp, defined moving images.

A second and probably more significant plus point is the Creative Zen 4GB's SD Card slot, which allows you to significantly boost your memory allocation.