It would have been nice if Creative had tried a little harder to reinvent the ZEN, but this is still a great portable media player 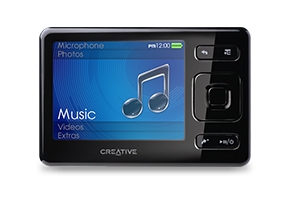 The Creative ZEN MX is a good media player with generous features, and its software doesn’t attempt to stage a coup against other media applications on your PC.

The Creative ZEN team has applied a very Apple-esque formula with its portable flash-based media player: re-releasing it without making many obvious changes bar increased storage. This is the major difference between the Creative ZEN MX and previous ZEN MP3 players.

The Creative ZEN MX portable media player is far better than an iPod Nano: it gives you more options and its software doesn’t end up taking over your entire computer by attempting to become the "alpha male" media application. We like the fact that you can just drag and drop files from your computer to the ZEN MX.

The Creative ZEN MX has 8GB of internal memory as well as an SD card slot, which means you have more space for music, pictures and movies. It looks almost identical to its predecessor, the Creative ZEN, but there are a few subtle differences. The power button has moved on to the front of the media player; it has also shed its sliding lock switch and uses a lock button instead.

The interface is slightly slow, but not enough to be particularly bothersome. It is easy to navigate and the buttons on the player are simple to understand.

Given the size of the device (5.5cm wide and just over 8cm long) it has a generously sized screen of 2.5in. Pictures are crisp and clear and text is easy to read. The scroll-through menu is very straightforward; once you’ve had a play around with it you pretty much know how it all works.

Not only is the ZEN MX aesthetically appealing and great to listen to, it also boasts some juicy features. We like how customisable the device is, with user-adjustable settings such as the comprehensive equaliser, bass boost, and smart volume functions. Having an FM radio just sweetens the deal even more. You can also change the player's wallpaper, use a shortcut button to play an 'album of the day', view a calendar and organiser (which can be synced with the supplied software), view photos, and even record voice memos using the built-in microphone. Of course, you get all the usual play modes such as repeat, random and repeat all. The ZEN MX ships with a pair of good quality ear buds.

It would have been nice if Creative had tried a little harder to reinvent the ZEN. Nevertheless, this is a great portable media player and we enjoyed reviewing it.