The CyberPower Value 600E-GP is a small and inexpensive UPS device for home and small business users. It has a capacity of 360W and can power up to three attached devices.

Depending on where you live in this great country of ours, you might sometimes experience problems with your power utility. Whether it’s a prolonged neighbourhood blackout or just a one-second interruption that resets your computer, there is almost nothing more frustrating than losing all your work in this fashion. This is why many of us use a notebook! The best defence against a power outage is an uninterrupted power supply (UPS) device such as the CyberPower Value 600E-GP. 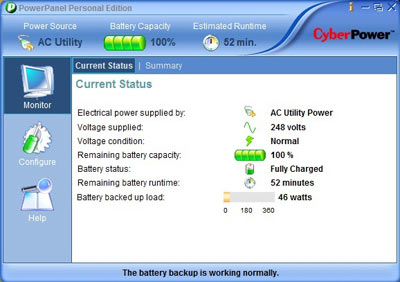 The CyberPower Value 600E-GP's software interface allows you to keep an eye on its vital signs.

The CyberPower Value 600E-GP is small, simple to use and has a large enough battery capacity to cope with a mainstream or mid-range computer system plus a monitor. It can be your saviour when power disruptions hit, as it allows you to save your work and shutdown properly, and it will also provide surge protection when the power comes back up. Depending on the specifications of your computer, it can even provide enough uptime to let your finish your work (although it will beep every 30sec in a bid to remind you that you are working on borrowed time).

The Value 600E-GP works as an intermediary between your computer system and the wall outlet. Instead of plugging your computer straight into the wall or a power board, you plug it into the UPS. It has three outlets on its rear, which can be used for your PC, monitor and another device, such as your modem. The 600E-GP has a built-in battery that can store a capacity of 360W Watts once it’s fully charged, and how long it lasts will depend on the load that your attached components draw from it. 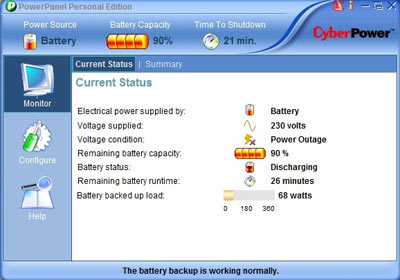 We were able to continue using our PC for 30min after the power went out.

For example, we tested the Value 600E-GP with a 23in Lenovo ThinkCentre M90z all-in-one PC. This is an Intel Core i5–based PC that draws approximately 72W when it’s used for word processing and Web surfing, and about 80W when under a full load. (It's definitely an efficient computer system.) When it was attached to the Value 600E-GP and the power went out, we were able to continue using the PC for another 30min. This is an excellent result for a PC with a 23in, Full HD monitor built in to it. If the PC and monitor were to draw half as much power, then the CyberPower would have lasted one hour, but there aren’t many complete computer systems out there that draw only 30W.

How long the CyberPower Value 600E-GP will last in your own setup will depend on the type of PC and monitor you connect to it. A larger monitor and a more powerful PC will drain its battery much sooner. For example, we plugged in a high-end gaming system with a top-of-the line CPU and dual graphics cards; the load on the little CyberPower UPS was too much, and it let us know by beeping every time we loaded a game and power requirement increased. Basically, if you’re in the middle of a game and the power goes out, you’ll want to have a larger UPS than the Value 600E-GE attached; the Value 1500E-GP will be more suitable in this instance, as it has a capacity of 900W (and is a much heavier UPS as a result).

You can keep an eye on the status of the Value 600E-GP through its supplied interface software, which is called PowerPanel. (More advanced models have an LCD-based status monitor built-in.) Simply load the software and attach the UPS device to your PC via USB to find out if the UPS is active and if its battery is charged. This software also lets you test the UPS, and it’s a good idea to run this every now and then just to make sure the unit is in good condition. The PowerPanel software lets you know how much power the battery is discharging and how long before it shuts down the computer. You can even keep track of how many blackouts you've endured.

The UPS device itself will consume power once it's plugged in and protecting your PC, but it's not too much power in the overall scheme of things. Measuring its consumption with our Power-Mate device, the UPS consumed 10W while it was charging its battery, and it continued to consume approximately 4W while it was idle.

If you're not at home during a power outage, the UPS will put the computer into hibernation when its battery level reaches 5min. This means that the state of your desktop should be saved and you can resume where you left off once you power up the PC again. 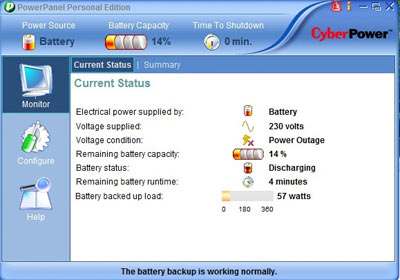 With four minutes of uptime remaining, the CyberPower will attempt to put your PC into hibernation 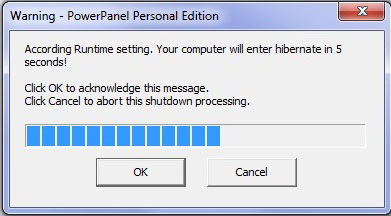 Our Windows 7-based PC was put into hibernation by the UPS and when we switched on the PC again, we were able to continue our work where we left off.

Overall, the CyberPower Value 600E-GP is a useful UPS device for anyone who wants to protect a basic computer system at home or in a small office. It will give you enough time to save your work and shut down your computer in the case of a blackout, and even if you're not home, if will put your PC into hibernation for you. It's small and easy to use and even if you're a technophobe, you'll be able to set it up very quickly. It ships with an equipment protection policy of $25,000, which is the amount you can claim in the event that equipment plugged in to the UPS is damaged by a power surge.