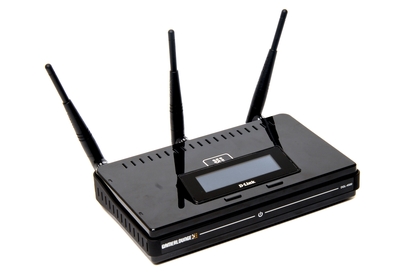 For users who want a fast wireless N router, this D-Link is a worthy choice. It produced very fast results in our tests, it's versatile, and it has some nifty interface features. But its physical design could be better.

The DGL-4500 Xtreme N Gaming Router is primarily aimed at gamers who want fast networking with priority given to gaming traffic, but it's a decent router for anyone who wants the latest and fastest in wireless technology.

It supports dual-band operation, so you can run it in either the 2.4GHz or 5GHz frequency bands, and it will support 802.11 draft-n, as well as 802.11g-based devices. You can't run both frequency bands at the same time, so unless your network is exclusively made up of 802.11 draft-n-based devices that are capable of running at 5GHz, you'll probably want to stick to 2.4GHz for the time being. (Of course, you can mix 802.11b/g and draft-n devices when using 2.4GHz.)

However, if you want to be an early adopter and set-up the rest of your network with 5GHz-capable devices, you'll experience excellent performance. The 5GHz band has been implemented to provide wireless networks with cleaner signals, as the 2.4GHz band can be heavily congested and very prone to interference. We tested the router's 5GHz mode in our office environment which is surrounded by at least a handful of 802.11g-based 2.4GHz networks, and we even ran a second 802.11g-based router in the same office as the D-Link.

Using the 2.4GHz mode of the D-Link, we conducted an 802.11 draft-n file transfer to a notebook 20m away, which attained an average speed of 1.98MBps. Using the 5GHz band, the same 802.11 draft-n transfer to the same notebook averaged 10.03MBps! You can see that without any interference to bother it, we achieved speeds better than what a wired 10/100 Ethernet connection can give.

In a home setting, the 2.4GHz band of the D-Link will fair much better, especially if the neighbourhood is sparsely populated with 2.4GHz-based networks. Indeed, we witnessed much better 2.4GHz performance in a home environment than we did at the office; we achieved an average transfer rate of 6.06MBps, with a peak transfer rate of 7.16MBps. While streaming video to a Netgear Digital Entertainer HD EVA8000 and simultaneously conducting a file transfer to a notebook, we recorded an average of 5.89MBps. Using 802.11 draft-n, you'll easily be able to run multiple video streams using this router in a typical home environment.

As for range, we were able to stream high-definition video up to 30m away, using 802.11 draft-n, but both the 2.4GHz and 5GHz bands cut out at the same distance, so the 5GHz band wasn't an advantage in this instance; physical barriers were still a thorn in its side.

Apart from its dual-band support, the stand-out feature of the D-Link is its LCD screen, which can provide information on the status of your network, Internet and wireless networking speeds, and settings. However, the screen sits at a fixed angle and isn't easy to see when sitting at your PC, unless your router sits below eye level. Furthermore, the buttons for navigating the screen's menu aren't labelled, and not very intuitive. Still, it's a nice feature for anyone who wants to view the status and settings of their network without using a PC.

The router's interface has comprehensive security settings, including an SPI firewall, anti-spoof checking and an application level gateway. Rules for online gaming can easily be set-up from a drop-down list, while intelligent QoS (quality of service) is present, too, which can separate data streams for gaming and video, for example, so as to eradicate lag when gaming.