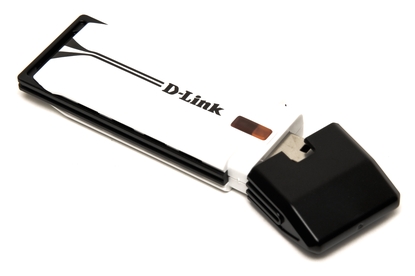 Those looking to enable Wi-Fi on their computer or upgrade to a dual band setup may find this adapter useful. However, those hoping to improve on their integrated dual band component should probably look elsewhere.

With built-in Wi-Fi now a regular feature of the latest PCs and notebooks, the role of the humble USB adapter is somewhat diminishing. However, with the expansion of 802.11 draft-n Wi-Fi into homes over both 2.4GHz and 5GHz bands, chances are your computer isn’t transferring files at the fastest possible speeds. D-Link’s DWA-160 solves this problem with a fairly quick dual-band USB adapter capable of connecting and communicating with the latest high-end draft-n routers.

The DWA-160 is fairly wide for a USB adapter, so users of notebooks with close USB ports may find themselves short a port or two when the adapter is plugged in. A nice touch is the small hole on the end for attachment to a key ring. With no easy way to secure the adapter’s plastic cap, though, the DWA-160 is unlikely to survive rigorous travel.

Set up is fairly simple for Windows, though it lacks any form of support for Mac OS X. The adapter implements Wi-Fi Protected Setup (WPS) as an optional connection process, though this is the adapter’s weakest point. Push Button Configuration is one of these WPS processes, simplifying the connection process by first pushing a virtual button in the software then pushing the corresponding button on a compatible router you want to connect to. Although this is technically a good idea for Wi-Fi newcomers, it didn’t work easily with D-Link’s DIR-855 Xtreme N Duo Media Router, and we ended up opting for the traditional process.

D-Link also provides a second WPS connection option in the form of a randomly generated Personal Identification Number. Although this, too, is sound in theory, it involves inputting the eight digit PIN into the desired access point — a process only really viable when connecting an ad-hoc network at close range.

Connected to the router at 5GHz from a distance of 20m, speeds averaged at 2.6MBps, making the adapter significantly slower than the Intel 5100’s 4.1MBps. Operating within the 2.4GHz band, this speed slowed significantly to 1.45MBps.