How good is Puzzle Quest: Galactrix? So good it'll get you in trouble with your mom. 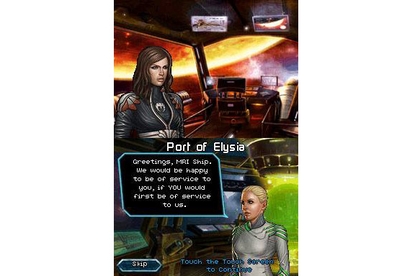 Tae can't come to The Final Word, right now, as he's too busy racking up points in yet ANOTHER round of Galactrix. I think it's safe to say that Tae dug this fast-paced, addictive puzzler.

How good is Puzzle Quest: Galactrix? So good it'll get you in trouble with your mom, as Reviews Editor Tae K. Kim recently found out.

Hi Mom. It's your second-born son. You know, the one you wrote that hilarious 'article' about in the last family newsletter? The one you titled "Deadbeat son disappears off face of the Earth"? Yeah, that was real funny. Look, I'm sorry I haven't called you or come to visit in a while. I'm reviewing this game called Puzzle Quest: Galactrix and it's been eating up a lot of my time.

And yes, before you flip out, it is a Puzzle Quest game. I know I disappeared for like a year when I got hooked on the original. The bad news is that Galactrix is as addictive and as awesome as the original. I've been playing it for the past two weeks straight and it's got everything that the original Puzzle Quest had-engaging puzzle-based gameplay coupled with a deep RPG element. But the formula's been improved in a lot of ways. The biggest change is the fact that the direction you move gems now dictates how new ones enter the playing field; make a match by moving a piece down and the board shifts that way. It really adds a nice level of strategy and forces you to think about how you manipulate the individual gems. Puzzle Quest: Galactrix

There's a main storyline you can follow as well as a ton of side missions to take on; if I did every mission, I probably wouldn't see you until Christmas at least. The majority of my time so far has been spent getting into battles against the A.I.; it's not the smartest opponent in the world and it wins more off lucky breaks than good strategy but it still puts up a decent fight, even if it does "cheat" every now and again. I'm not a big fan of the game's pacing, though; you have to put up with a lot of tedious leapgate hacking and backtracking in order to complete early quests. But the fact that I keep on playing probably says a lot about how deep and engaging the game is.

But you can stop leaving me angry phone messages because the good news is that I'm going to quit playing the game soon. It's really limited in terms of presentation; the graphics are nice but they're tiny and it hurts my eyes to stare at the DS for long stretches (and really, there's no way to play this game and not have it turn into a long stretch). The stylus controls are also a little stubborn and it sometimes registers the wrong move, which sucks. I also hated the intermittent pauses when the game loads something or saves my progress.

Unfortunately, the bad news is that I'm only quitting so I can move onto either the PC, Xbox 360 or PS3 version when it comes out later this year. After seeing the PC demo, I can tell you that the presentation is much better on one of the bigger platforms. The graphics are crisper, there are neat visual effects and it's probably going to be superior experience. Still, until those versions come out, I'm going to keep on playing the DS version. So I'll just apologize now for all the emails and phone calls I'm not going to return. I promise I'll make it up to you on your birthday. Can you send me a note and tell me when that was again? Just kidding. I love you Mom.