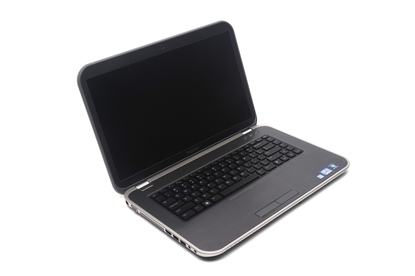 Dell's Inspiron 15R 5520 (2012 model) is an inexpensive Core i7 powerhouse that features a Full HD screen and discrete graphics. It can be used for gaming in addition to office tasks and it's comfortable to use. It has some shortcomings though, such as 10/100 Ethernet instead of Gigabit, short battery life and a somewhat tacky design, but it's still a solid, sub-$1000 performer.

Dell's 2012 model Inspiron 15R notebook, the 5520, is an all-purpose model for serious work and multimedia pursuits, and it can even be used for gaming. It features a third generation Intel Core i7 CPU at the helm, and it has impressive features such as discrete graphics processing and a Full HD screen. However, it also has a few shortcomings, particularly when it comes to networking.

Note: Our review of the 2013 model can be found here: Dell Inspiron 15R-5521 touchscreen notebook.

Considering that the Inspiron 15R 5520 is meant to be a mainstream model with a competitive price tag, its Full HD, 1920x1080-pixel screen is feature that stands out. You'll have difficulty finding another laptop on the market that costs under $1000 with such a high-resolution screen, and the pleasing thing is that the quality of the screen isn't too bad either. It's not an IPS (in-plane switching) panel, but the viewing angles are not overly restrictive. We didn't have to tilt the screen too much at all in order to clearly see photos and videos, and we found the colour reproduction and depth to be quite good. Importantly, it's a matte screen so you won't have to spend your life dodging reflections.

You'll have difficulty finding another laptop on the market that costs under $1000 with such a high-resolution screen.

The styling of the Inspiron 15R is a little tacky though. It has grey trim around the edges and there are rounded corners that make the unit look playful, but bulky. It doesn't feel flimsy and we didn't notice any unwarranted creaking from the chassis as we moved it around, even when we held it from the side that has the built in optical drive. The lid does flex a little and isn't up to the build standard of more expensive laptops, but it's not like it will break if you accidentally knock it — it's still strong enough. The hinges adequately perform their one task of holding the screen still at your designed angle.

We're not sure about the power button though. It sits on the edge of the chassis just near the left hinge; it feels very spongy and as though it can break off if you press it too close to the edge. We'd prefer it if it was somewhere further in on the chassis rather than on the edge. On the other side of the chassis, under the right hinge, reside three shortcut buttons. One can be programmed to launch your favourite application, another brings up a useful panel of system settings (Windows Mobility Centre) and there is also a button that brings up equaliser settings for the audio processor.

The keyboard on the Inspiron 15R has chiclet, matte keys that are rounded and they possess enough travel and softness to be comfortable for long typing sessions. It's a keyboard that bounces slightly when you hit the middle keys, but this wasn't too distracting for us. Dell hasn't packed in a number pad on this model, which means the keys are a little more centred than usual and it makes for a luxurious typing experience. The layout of the keys is standard, but there is a column of page, home and end keys on the far right, which takes some getting used to. The delete key is in its rightful spot in the top-right corner though. It's not a backlit keyboard, but for $999, you can't have everything. 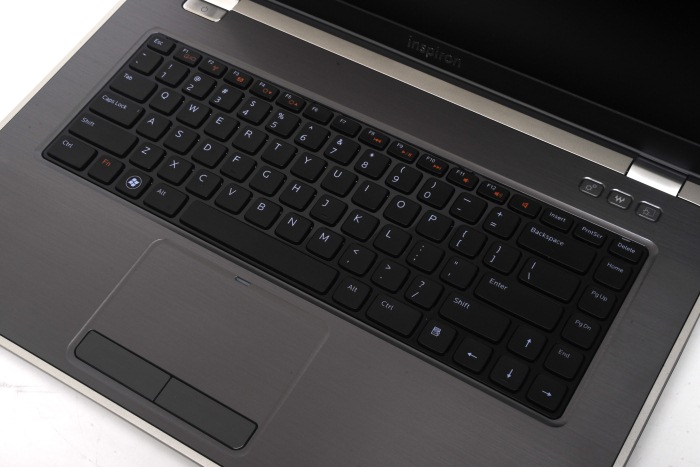 The keyboard and touchpad layout.

There is an ELAN touchpad installed, and it's a big one (100x58mm) that also has physical left- and right-click buttons. It's not completely centred from the left and right sides, but is just a little off to the right of the spacebar. It never got in the way while typing. It's a touchpad that performed well during our time with this laptop, but we can't neglect the fact that we had to get a replacement model from Dell because the first one we saw had a touchpad that practically made the laptop unusable without plugging in a mouse. We experienced lots of sticking and inadvertent clicks while moving the pointer with our first model — none of those problems were present on our replacement model, leading us to believe it was just a problem with our initial test unit. The touchpad supports multi-finger gestures such as two-finger scrolling and three-finger flicking, but it doesn't support four-finger swipes, which is a shame as it is definitely big enough for them.

Speaking of big, this laptop certainly commands a large footprint. It's a far cry from the thin and light Ultrabooks we've seen so much of this year, measuring 380mm wide, 250mm deep and 37mm thick, and it tipped our scales at a hefty 2.9kg. This is 400g heavier than other 15.6in laptops we've seen recently, such as the HP Pavilion dv6-7030tx and Medion Akoya P6635, which weighed in at 2.5kg.

Even though it's a big and relatively heavy notebook that can be tiring to lug around every day, it's not all that uncomfortable for lap usage. Only some slight warmth was noticeable, emanating from the left palm rest, and the left areas of the laptop in general. There are air intake vents on the base, and an exhaust vent on the left side that you'll need to be mindful of when not using the laptop on a hard, flat surface. The speakers will also perform best when on a hard, flat surface, because they are located under the front lip of the laptop, at the point where the chassis starts to taper upwards. They produce reasonably full audio and are enjoyable for listening to music and watching videos.

The base of the Inspiron 15R 5520 has a built-in DVD burner and a decent assortment of ports. Conveniently, it has four USB 3.0 ports, with two located on either side of the chassis. You also get HDMI, VGA, an SD card reader and separate microphone and headphone ports. There is also an Ethernet port, but unfortunately, it doesn't support Gigabit speed. You also get Bluetooth and there is an Intel Centrino Wireless-N 2230 Wi-Fi adapter, which is a single-band 802.11n adapter that also supports WiDi (Intel Wireless Display).

The ports on the left.

The ports on the right.

Speed isn't much of an issue for the 15R. It comes well stocked with an Intel Core i7-3612QM CPU, which has four cores, Hyper-Threading and a standard clock speed of 2.1GHz. In our test system, this was joined by 6GB of DDR3 SDRAM, a 500GB hard drive (along with a solid state cache drive) and an AMD Radeon HD 7670M graphics adapter. In our Blender 3D rendering and iTunes MP3 encoding tests, this configuration notched up times of 22sec and 46sec, respectively, which is what we expected out of the CPU. Its Blender time is exactly the same as other laptops that use the same CPU, such as the Lenovo ThinkPad Edge E530 and the Sony VAIO E Series 14P, and it was faster than those notebooks in the iTunes test.

In our AutoGordianKnot DVD-to-Xvid test, the Dell recorded 42min, which is one minute slower than the Lenovo, but five minutes faster than the Sony. We also found the Dell to be a little too slow in the Arcsoft Media Encoding test, in which it took 13min 37sec to turn a DVD file into an MKV file. This is about two minutes slower than we expected. The laptop's hard drive, which has a 5400rpm spin speed, recorded 49.3 megabytes per second in our file duplication test, along with read and write rates of 119MBps and 83MBps, respectively, in CrystalDiskMark. These are good overall results.

Graphics are handled by a mid-range AMD Radeon HD 7670M adapter, which has 1GB of its own RAM. It recorded a mark of 8292 in 3DMark06, which isn't quite as strong as the Sony VAIO E Series 14P, which has the same CPU and graphics combination — that laptop got 9014. This result was also slower than laptops that have mid-range NVIDIA GeForce GT 630M graphics (such as the HP Pavilion dv6-7030tx, which got 9548, and the ASUS N56VW, which got 10756.

However, it was strong in the Battlefield 3 test. Using a resolution of 1366x768 and auto graphics details, the Dell managed to keep a pace of around 31 frames per second (fps), dropping to around 27fps only when the landscape filled with explosions, smoke and flying debris. At higher resolutions, it didn't fare as well, and playing a game this taxing at the screen's native resolution of 1920x1080 pixels resulted in a frame rate of around 17, with a low of 14fps and a peak of 19fps. What this means is that you can use this notebook for gaming, as long as you use a resolution lower than the screen's native Full HD resolution.

We found the Inspiron 15R 5520 to be responsive while using it for our day-to-day tasks, and it even booted in a quick time (22sec for a cold boot). Resume time from sleep was approximately 3sec. There is some extra pre-installed software that could be a nuisance, such as the Dell Stage (a dock that sits on the Desktop), so some time will need to be spent configuring the laptop if you don't want that software to appear when you boot up.

A battery with a rating of 4.2 amp-hours sits in the base. It didn't give the Inspiron 15R too much life though. In our rundown test, in which we disable power management, enable Wi-Fi, maximise screen brightness and loop an Xvid-encoded video, the laptop only lasted 2hr 16min. This is despite the graphics being manually set to use the power saving, Integrated Intel HD 4000 graphics for our media player. We were expecting this laptop get around three hours instead. The switchable graphics in this laptop prompt you to assign a power profile to almost every program that is launched, which can be an annoying experience. Nevertheless, this laptop isn't one that's likely to be used too far away from a power outlet due to its size and weight, but if battery life is a concern of yours, then you might want to look elsewhere.

Dell's Inspiron 15R 5520 represents good value for money, especially if you're looking for a notebook that can be used for a little bit of everything. It has a powerful CPU and very good discrete graphics, and most importantly, it comes with a Full HD screen that has a matte finish. However, it doesn't have Gigabit Ethernet, which is a let-down for those of us who want fast networking performance in a notebook. The design is a little bit tacky and it is quite a large notebook with comparably short battery life, but if mobility isn't of major importance to you, then this shouldn't be a problem. All up, a good unit, albeit with some shortcomings.