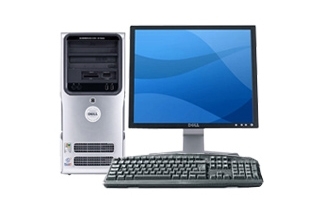 For the price this system is a very decent all round performer.

Even though it would void the warranty, this Dell looks like a prime candidate for overclocking. Behind the front panel of the BTX case is a gaping hole for maximum airflow. This flows straight through the PC via the fins of a huge CPU heat sink with a surface area that would rival "The Biggest Loser". It then flows over the heat sink of the video card. The BTX motherboard is made for quiet computing, with only two fans.

Inside is cable heaven, everything is tucked away nicely, increasing airflow. It is also easy to access, with a well-designed tool-less chassis and easy access tool-less hard drive trays. A second tray has been left spare along with two more RAM slots for upgradeability.

Running on a Pentium 4 650 Processor, with HyperThreading, the Dimension let us down somewhat in benchmarking, delivering a score of 77 in PC WorldBench 5 - surprisingly, being held back by its multitasking ability. As expected with the ATI Radeon X600 video card, it scored 1723 in 3DMark, and an average frame rate of 6fps in FEAR on maximum settings.

It comes bundled with Sonic MyDVD and Windows XP Media Center Edition, a 13-in-1 USB 2.0 Hi-Speed media card reader for all flash storage formats and a 7200rpm 250GB hard drive. Couple this with a brilliant 20in LCD screen that supports a resolution of 1680x1050 pixels; a Sound Blaster X-Fi Xtreme Music (which sounds incredible with 5.1 support) and the quiet factor, and all of a sudden, the Dimension is very appealing as a media hub. Video-out is also supported in case you have a bigger and better screen.