Dell Inspiron 14 2-in-1 review: Nice features on a budget

This Inspiron has high-end laptop aspirations, but with a few notable downsides. Dell's convertible Inspiron has a high-end laptop features for roughly $1,600 but with a few notable downsides.

The Dell Inspiron 14 2-in-1 occupies an unusual spot in the company's laptop lineup.

While Dell tends to reserve the Inspiron line for its cheapest and clunkiest consumer-grade computers, the Inspiron 14 2-in-1 borrows a handful of elements from higher-end laptops, including a metal lid, a fingerprint reader, surprisingly great speakers, and a sharp touchscreen that flips around into tablet mode. However, further inspection reveals where the compromises lie.

The display is on the dim side, the chassis is part-plastic, the trackpad has a chintzy click mechanism, and the laptop is heavier than high-end computers with similar specs. But, if you can snag the Inspiron 14 2-in-1 for less than its US$1,049 list price, those trade-offs may be worthwhile. 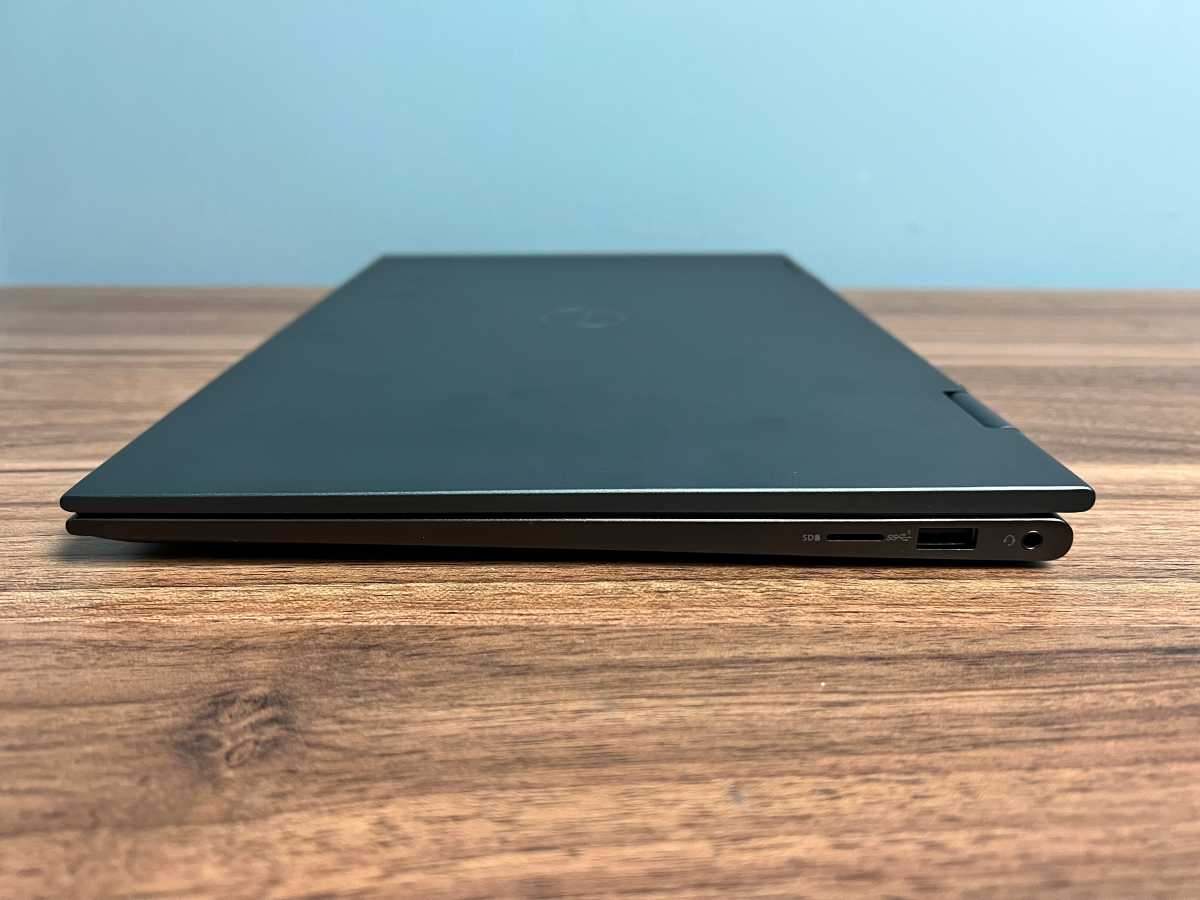 The Dell Inspiron 14 2-in-1 has both a USB-A port and a MicroSD card slot. Image: Jared Newman / IDG

Meanwhile, an US$849 option (or US$600 on saleas of this writing) leaves you with a Ryzen 5 5500U processor, 256 GB of storage, and 8GB of RAM. Unfortunately, you can't mix and match tech specs, so your only option if you want more storage or RAM is to buy the higher-end model for $200 more. (Dell also offers other configurations with Intel processors, which we're not reviewing here.)

Port selection is solid with both HDMI and MicroSD ports and two USB-A ports, but be aware that the HDMI 1.4b spec only supports 4K at 30 Hz, so you'll be limited to 1080p on external monitors or TVs if want smooth 60 frames per second video. Also, the laptop's charger occupies the sole USB-C port, leaving no room for USB-C accessories.

The Inspiron 14 2-in-1 comes in a single color scheme called Mist Blue, but it's a subtle hue that only covers the aluminum lid and it's barely distinguishable from the gray matte plastic chassis underneath. Despite the use of plastic, this is a sturdy machine. You'll hear nary a creak when grabbing the laptop by its corners and the keyboard barely flexes at all under pressure. 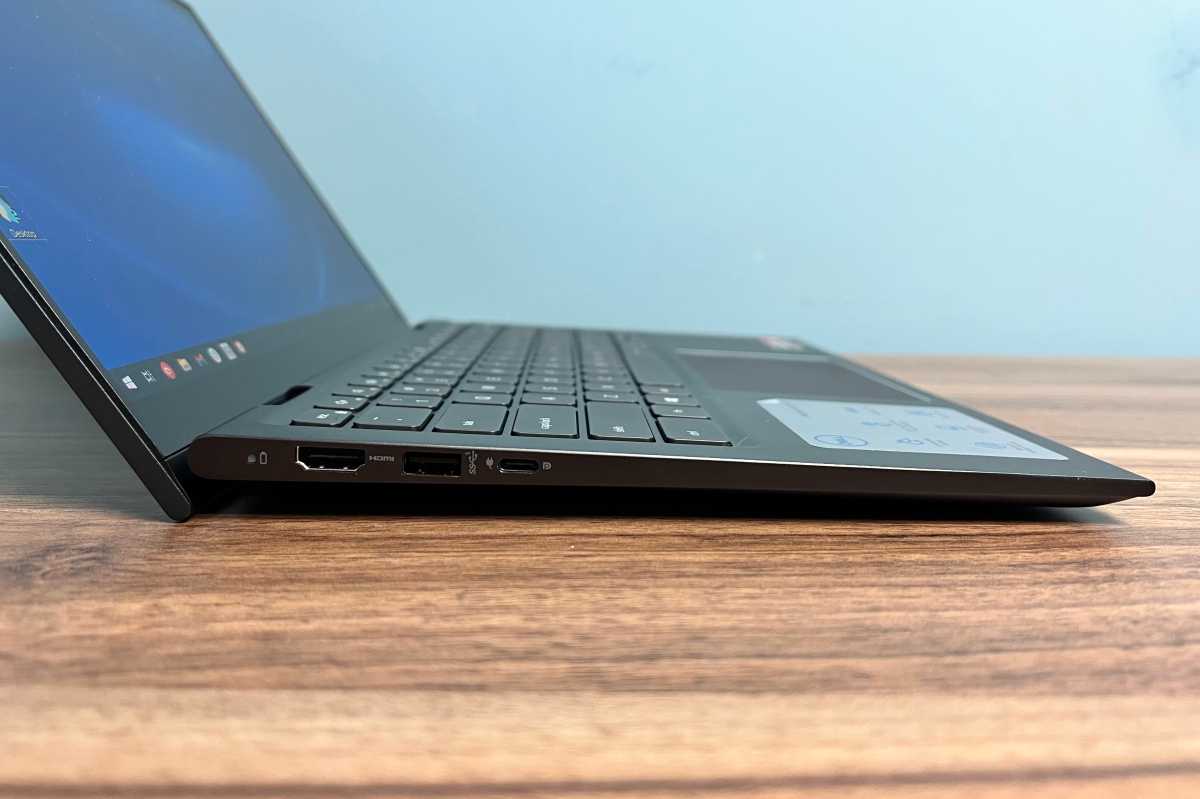 A drop hinge gives the Inspiron 14 2-in-1 a raised surface on which to type. Image: Jared Newman / IDG

The 1080p touchscreen has a glossy finish with edge-to-edge glass that helps reinforce the laptop's premium look. The bottom of the screen drops down below the keyboard section in clamshell mode, providing a raised surface for typing. The screen can also flip around 360-degrees into tablet mode and has stylus support, though no pen is included in the box.

Still, with a peak brightness of 250 nits, this is a screen whose brightness you'll want to keep cranked up all the way in well-lit environments and you'll likely wish it could get a bit brighter. I also noticed a slight fading in brightness around the upper edge of the screen—the mark of a mediocre display. 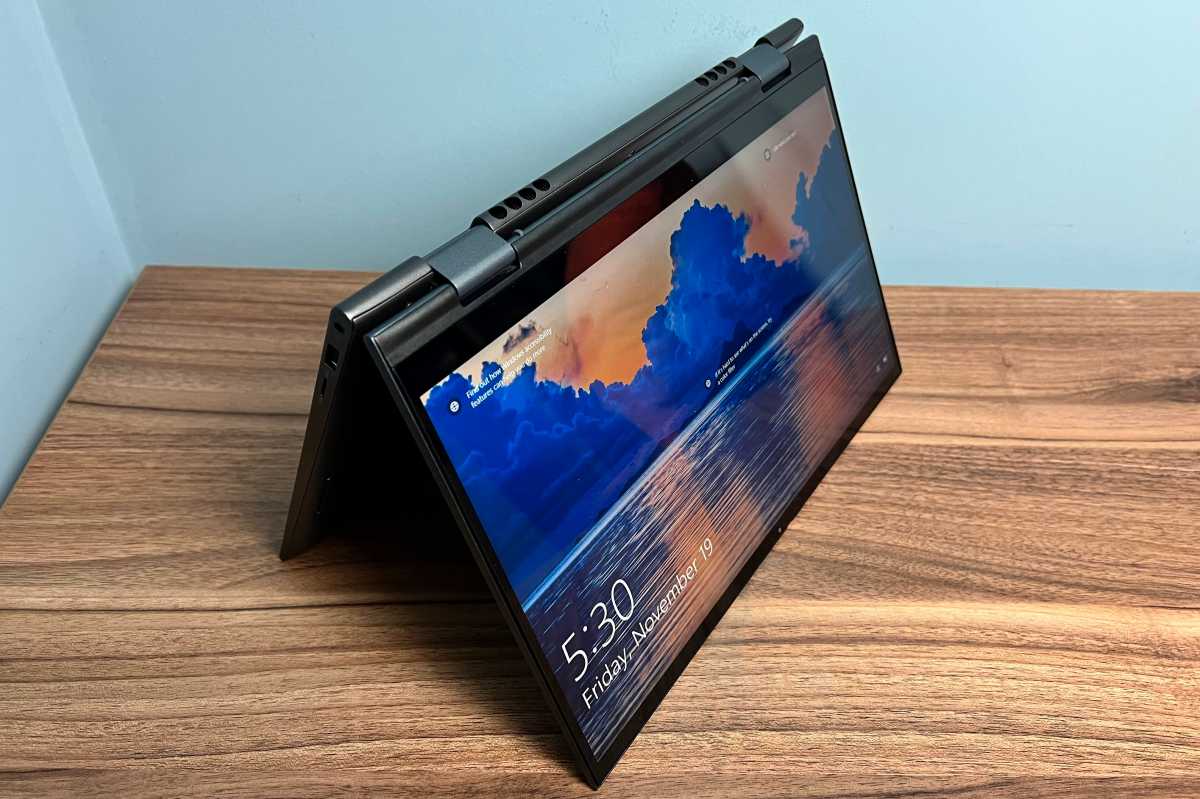 As the name suggests, the Inspiron 14 2-in-1 can fold around into a tablet—or prop itself up in tent mode. Image: Jared Newman / IDG

Dell put a pretty nice keyboard into the Inspiron 14 2-in-1. While the keys keep a low profile and don't offer a huge amount of travel, they depress with a satisfying bump and I detected none of the squishiness or wobbliness you find on cheaper keyboards. They also barely give off any noise and support two levels of backlighting. 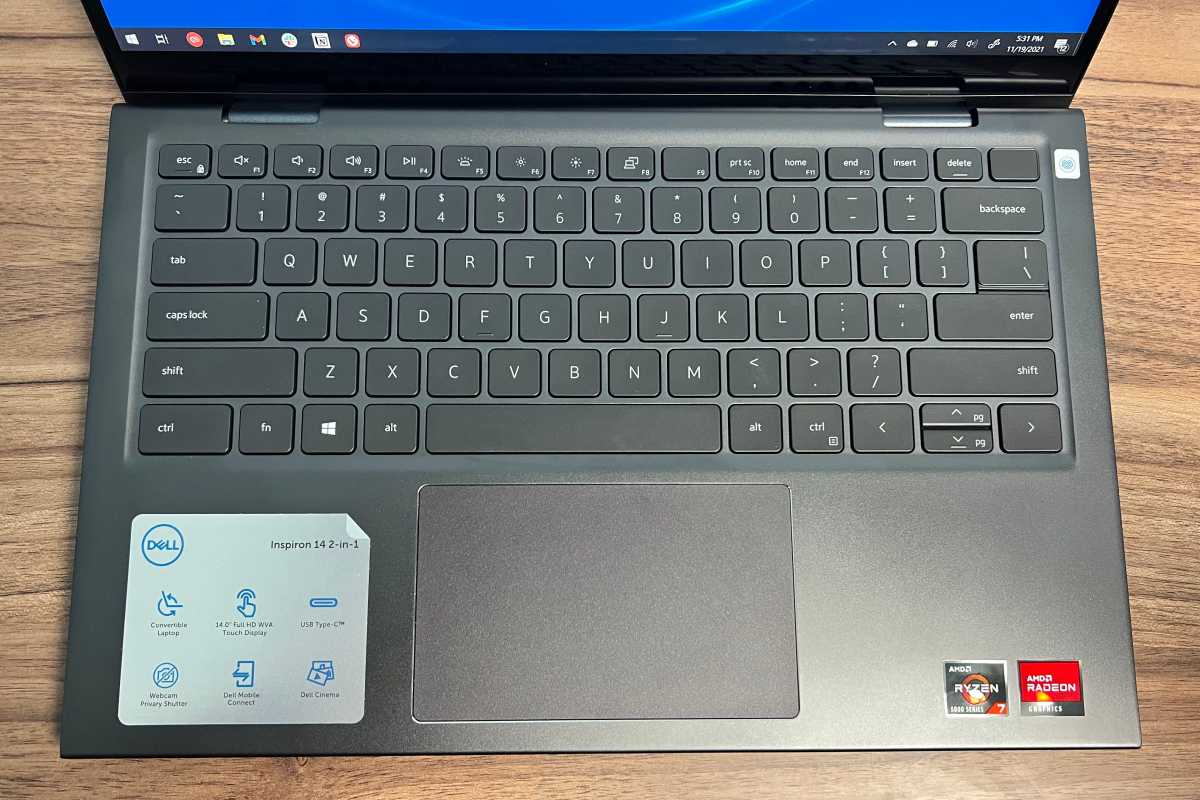 Dell equipped this laptop with a spacious keyboard and trackpad, but the former is better than the latter. Image: Jared Newman / IDG

The trackpad is more of an issue, particularly for users who prefer to click down instead of tapping. The click mechanism starts to get pretty stiff about halfway up the trackpad and it wobbles just slightly under your finger before you click down the whole way. While the touchpad surface is fairly smooth, it still has a bit more friction than what you'd find in higher-end laptops.

Like most Windows laptops, the Dell Inspiron 14 2-in-1's 720p webcam is nothing special. It's passable for videoconferencing in well-lit rooms, but it shoots grainy video in lower lighting conditions. Microphone quality isn't great either, resulting in thin-sounding vocals.

The camera does include a privacy shutter, which is another nice touch typically found on higher-end laptops. While it lacks face recognition support, there is a fingerprint reader built into the power button on the keyboard. 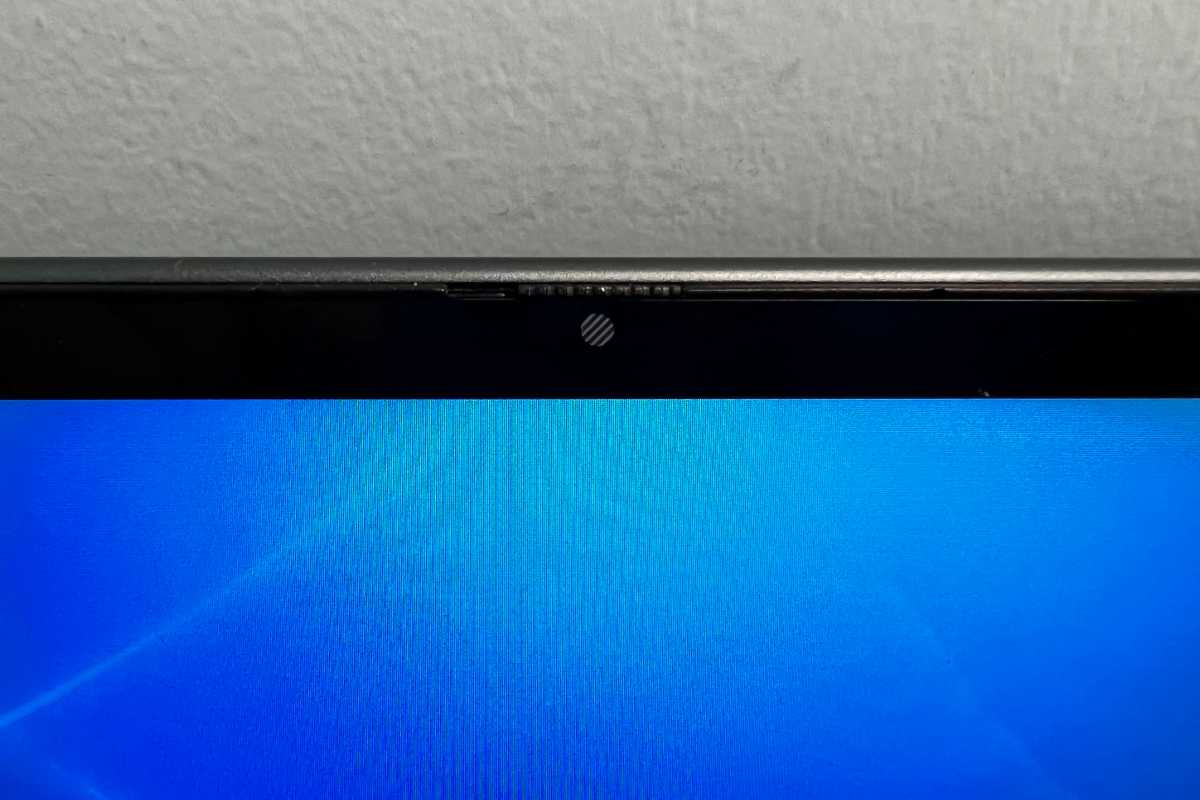 Speaker quality is also a pleasant surprise, as the Inspiron 14 2-in-1 produces some of the loudest and punchiest audio you'll find on a Windows laptop. Although the sound does distort a bit at maximum volume, you'll never strain to hear what's happening while watching videos or tuning into conference calls.

For a laptop with an AMD Ryzen 7 5700U processor on board, the Dell Inspiron 14 2-in-1's performance is just about what you'd expect. It tears through multi-threaded tasks such as video encoding and it feels sufficiently zippy for web browsing and document editing. The laptop also remained comfortably cool and quiet while juggling multiple apps, browser tabs, and downloads.

The Inspiron 14 2-in-1's productivity prowess was on display in Futuremark's PCMark 10 test, which simulates a gamut of office work, web browsing, and creative tasks. It edged out several other 2-in-1 laptops we've tested lately, including the similarly-priced HP Envy x360 15 with the same processor. 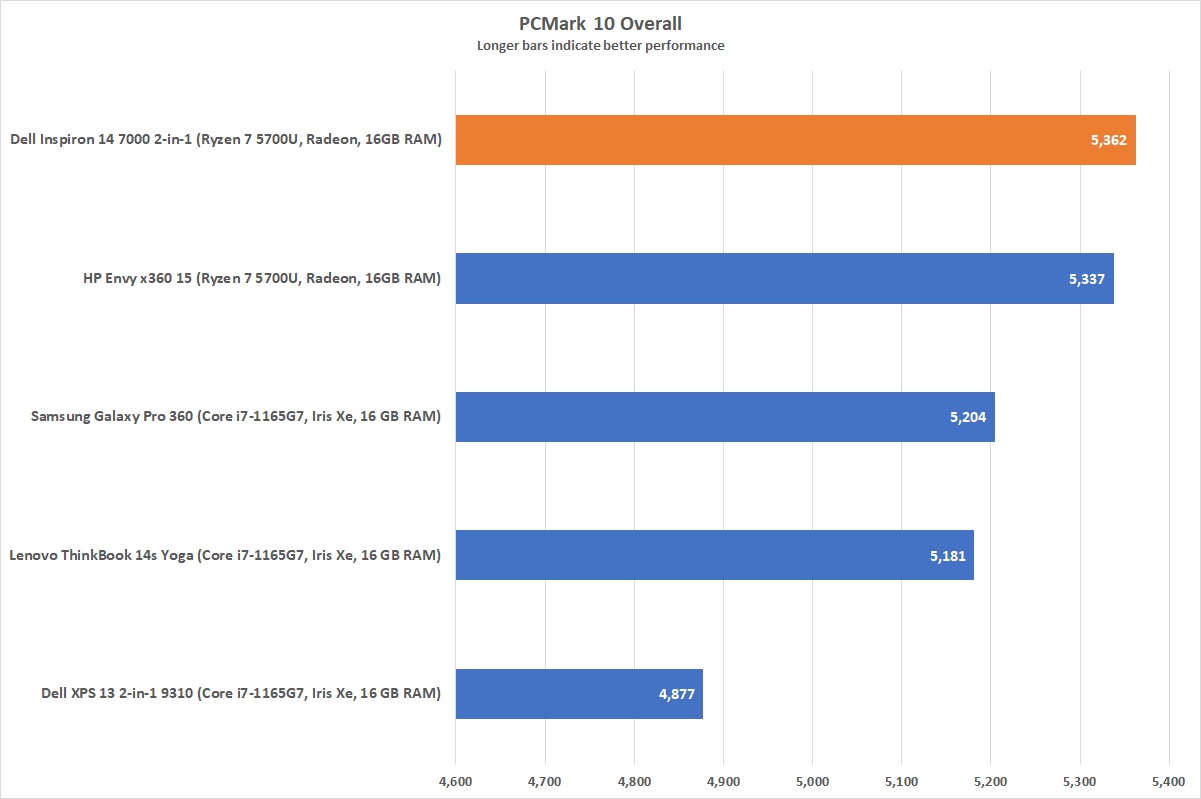 HP's laptop did retake the lead in our Handbrake test, which involves encoding a large video file, but both laptops maintain a commanding lead over comparable 2-in-1s with Intel processors. More cores are almost always better for this test and Intel's quad-core i7-1165G7 CPU is no match for the eight cores in AMD's Ryzen 7 5700U. 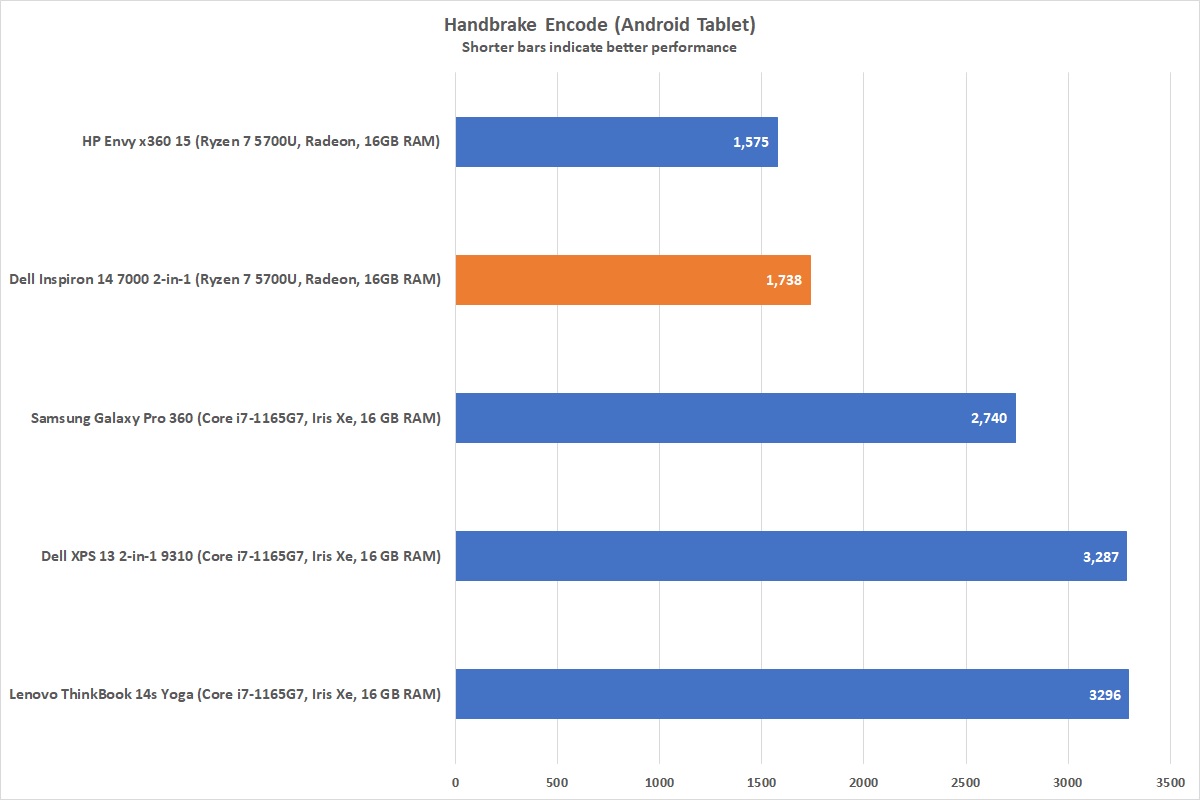 Similarly, the Inspiron 14 2-in-1's multi-threaded performance excelled in the quick performance stress test of Cinebench, but note that Intel-powered laptops have an edge in single-threaded performance, which covers most basic productivity tasks. The difference isn't something you'd necessarily notice, but it is there. 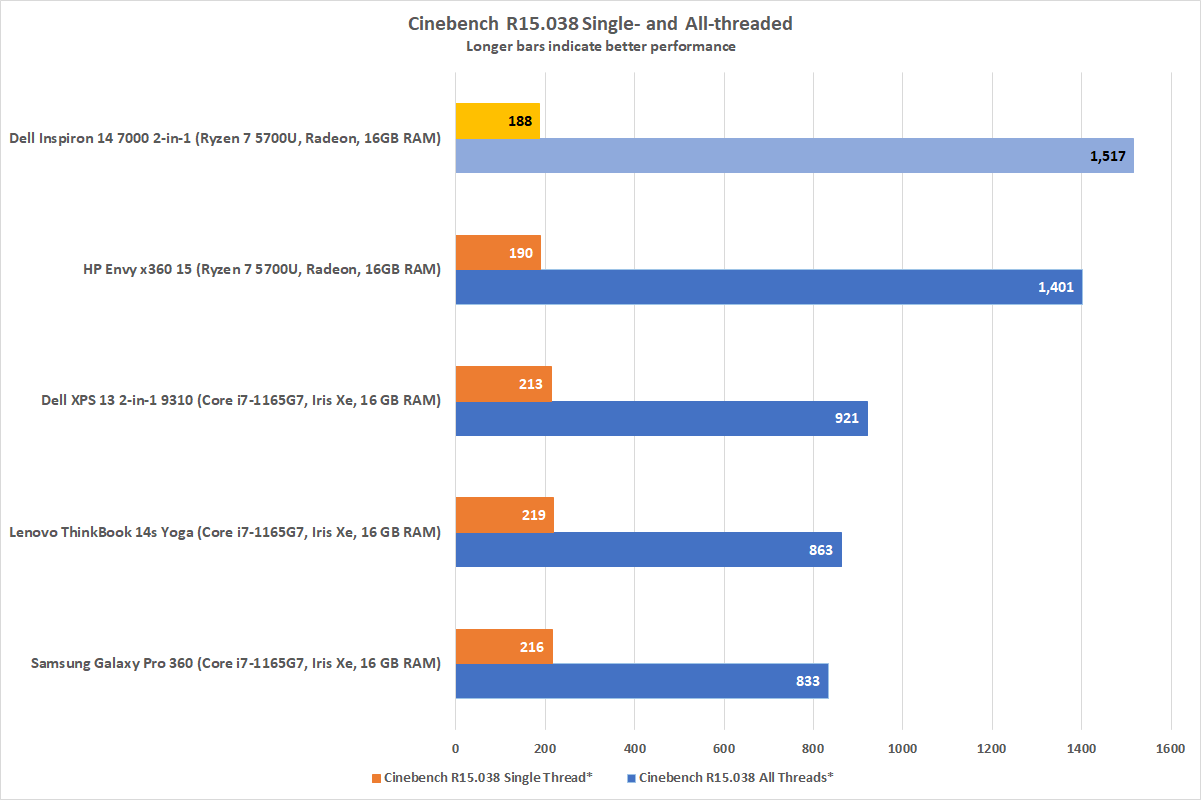 As for battery life, the Inspiron 14 2-in-1 has a 54,000 Whr battery, which puts it in the middle of the road for thin-and-light laptops. That's clearly reflected in our battery rundown test, which loops a video in offline mode at a consistent brightness level. Dell's laptop lasted for 11 hours and 17 minutes, which is neither bad nor great. Outside of test conditions, you may be able to squeeze a full workday out of this laptop, but you'll likely want to pack the charger just in case. 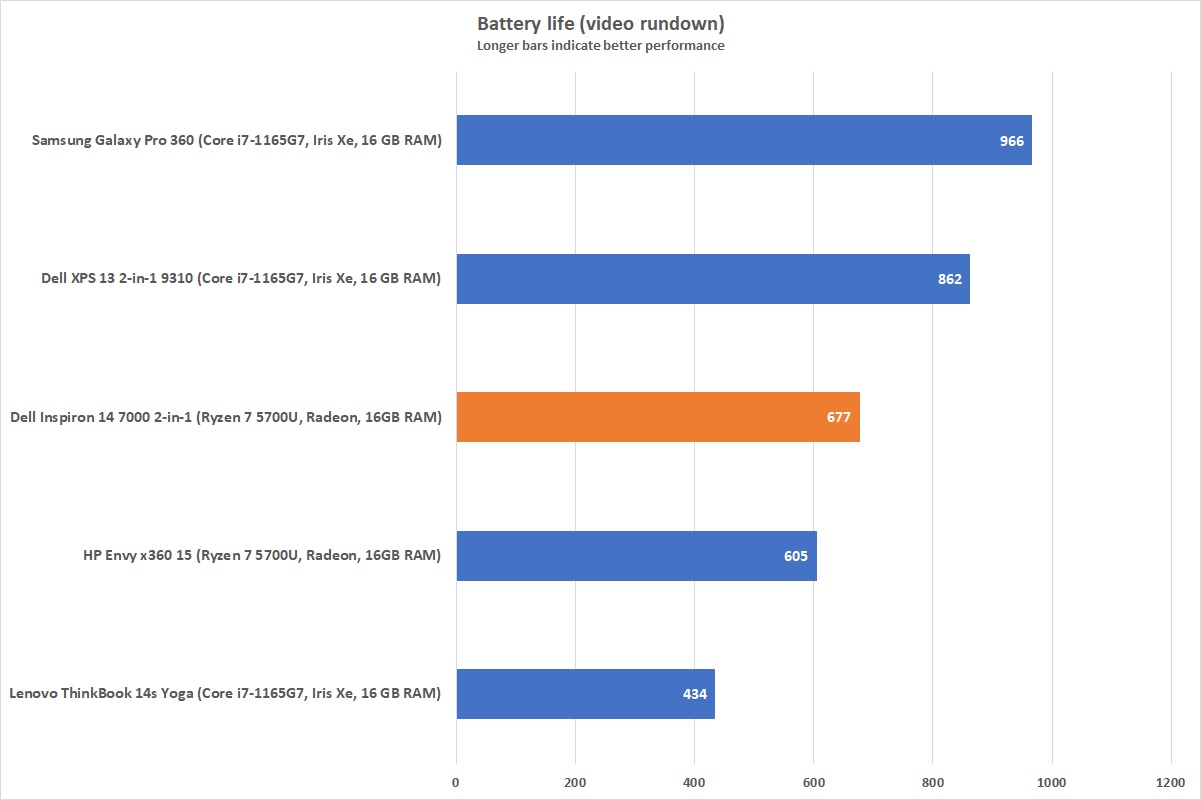 Meanwhile, AMD's integrated Radeon graphics still aren't made for serious gaming, but I was able to eke out a session of Fortnite at medium graphics settings and 50% display scaling. And, of course, less demanding games like the 2D platformer Axiom Verge 2 worked just fine. Still, I've had better gaming experiences with the Iris Xe graphics in Intel Core i7-powered laptops and our 3DMark Time Spy test shows that these laptops tend to fare better in gaming benchmarks as well.

Overall, this Dell Inspiron 14 2-in-1 offers a lot to like, especially at its oft-discounted price of $800. It's a sturdy laptop with strong performance, a convertible touchscreen, loud speakers, and a convenient fingerprint reader. But the trade-offs you'll make in pursuit of that lower price—most notably the dim display and stiff trackpad—might just keep you from outright loving it.