Turn this little Dell from a laptop into a tablet, but don't expect fast performance from its Celeron CPU 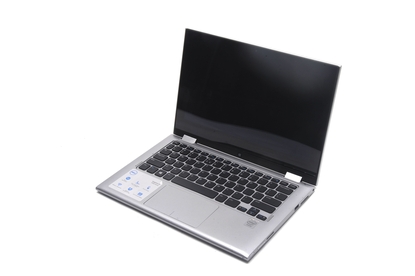 Dell's 2-in-1 is an inexpensive proposition if you're after a dual-purpose device. It's easy to use it as a tablet, just by tilting the screen all the way back around the unit, and it does the job well enough as a laptop. Just don't expect a lot of speed out it since it's based on an Intel Celeron CPU.

Dell's low-cost Inspiron 11 3000 is a 2-in-1 unit for those of you who want a device that can act both as a Windows laptop, and as a Windows tablet. Unlike the flip-screen in the company's XPS Convertible model, this unit uses a hinge that tilts the screen all the way back and around to the other side, and is similar to the designs we've seen from HP's X360 and Lenovo's Yoga. That function is the main selling point; apart from that, it has a simple configuration that will handle basic tasks.

Laptop and tablet in one

With an 11.6in screen and a weight of 1.37kg, the Inspiron 11 3000 2-in-1 is easy to take around with you on a daily basis, and the fact that it can be used as a laptop or as a tablet means it can be tailored to specific tasks. Use it as a laptop when you need to do stuff that requires typing, then tilt the screen all the way around when you want to read an ebook or use touch-centric applications. If you want to watch videos, simply put it into 'tent' mode, which is good if you want to save space, or just tilt it in such a way so that the keyboard is behind the screen.

Despite being a low-cost unit, it feels well-constructed, and the transition from laptop to tablet occurs smoothly. It's not as bulky in its design as the HP Pavilion x360 hybrid laptop (it also doesn't have as fancy a paint a job), and it’s actually quite a slim unit. The only thing you have to deal with is the feel of the exposed keyboard on the back of the unit when the 2-in-1 is used as a tablet. The keyboard is disabled in this position, so pressing the keys will have no effect on the system. What you need to be aware of is that dirt and other particles can make their way into the key cracks, so if you are folding the unit in such a way where the keys become the base, make sure the surface they are sitting on is clean.

The 11.6in screen has a 1366x768-pixel resolution, and it's an IPS-based screen (in-plane switching), which gives it excellent viewing angles. Regardless of the way you hold the screen, be it landscape, portrait, or upside-down, you will still be able to see details and colours clearly. The touch performance of the screen wasn't always great during our test period. There were instances where our intention to scroll the Windows Start screen was interpreted as a tap instead, and we ended up launching apps by accident. That stickiness was the only blemish during our use of this product as a tablet, and it proved to be decent for swiping through photos, browsing through Bing News, and looking at Bing Maps, among other things.

As a laptop, the Inspiron 11 3000 sits well-balanced and has big, isolated keys that can be hit with ease. The keys feel a little bit spongy, but they possess enough travel and responsiveness to make long typing sessions enjoyable. They are relatively quiet, so unless you hit them too hard, your officemates, classmates, or roommates won't get annoyed by your work.

There is a big touchpad installed (105x60mm) that's centred according to the chassis, rather than the space bar, but it doesn't get in the way while typing. Our right palm never caused the cursor to fly off and end up in different locations throughout our documents. However, it's not a great touchpad. It was quite 'sticky' for us a lot of the time, meaning that gestures such as two-finger scrolling sometimes continued inadvertently after we'd finished scrolling and attempted to move the pointer elsewhere on the screen.

The Dell Touchpad software also didn't initially respect our decision to enable 'reverse' scrolling, meaning we had to change this setting a couple of times before the system would recognise it. Furthermore, the touchpad software took a long time to launch when we double-clicked it from the System Tray, and, in some cases, we had to go through the Control Panel and launch it through the mouse properties instead.

In the engine room of the 2-in-1 Inspiron is an Intel Celeron N2830 CPU, which has a speed of 2.1GHz and two cores. It's not a fast CPU, and this was shown in our Blender 3D rendering test, in which our job was rendered in 2min 42sec. It's a slow result that's not up to par with devices that run Intel's current Atom platform (Bay Trail). Those can complete the same test in about 1min 30sec these days (see the Lenovo ThinkPad 10 as an example).

More than that, though, the Dell often felt sluggish. It wasn't unusable, but there were instances where system settings or menus would take a noticeably long time to appear, and scrolling in Web pages sometimes wasn't smooth. For the most part, though, we found the user experience to be decent. It was fine when we used Google Play Music while working with Google Docs and browsing the Web, and YouTube videos played smoothly, even at Full HD. Locally stored Full HD videos also played smoothly. Online streaming from services such as NBA League Pass were a bit hit and miss; for this service, we observed best results when using the 1600Kbps bit rate. The 3000Kbps rate dropped too many frames.

Rounding out the configuration of the Inspiron 11 3000 Series is 4GB of DDR3 SDRAM, and a 500GB, 5400rpm hard drive. Dell has put a value on mass storage rather than speed by using a hard drive instead of a solid state drive, and this was shown in CrystalDiskMark where the hard drive recorded a sequential read speed of 102.2 megabytes per second (MBps), and a write speed of 97.23MBps.

One area in which the Inspiron 11 is well equipped is in Wi-Fi connectivity. It has a dual-band Intel Wireless-AC 7260 module installed, and this supplied us with transfer rates of up to 17MBps from our 802.11ac based Belkin AC1750 modem-router.

Unlike many other products of this ilk, the bottom panel of the Dell can be removed, and you can swap out the battery, RAM or storage if you ever have the need. You could replace the hard drive with a solid state drive to give the system a bit more responsiveness when accessing data.

As for battery life, the 43 Watt-hour battery lasted 5hr 48min in our rundown test, in which we disable power management, enable Wi-Fi, maximise screen brightness and loop a Full HD, MP4 file. This isn't bad at all for an inexpensive product, and you could get more out of it if you were to use it for simple Web browsing tasks with a low screen brightness and a balanced power profile.

Along the sides, you get full-sized HDMI, one USB 3.0 port, two USB 2.0 ports, a headset port, and a full-sized SD card slot. Since there is a tablet focus, the power button is located on the right edge, rather than above the keyboard, and there is a physical volume rocker present, too. A physical Windows Home key resides at the bottom of the screen. The only thing missing is a screen rotation lock. Speakers are present, too, and they are useful when you don't have any other options. Bluetooth is present, so you could hook into a sound system wirelessly for a much better listening experience.

The unit gets a little warm towards the spine, where the heat sink is located, but not enough for it to be bothersome if you are using the unit in your lap. Some slight warmth can also be felt on the keyboard.

This model isn't intended to compete with more speedy products such as Dell's own XPS 12 convertible, but is instead a low-cost option for those of you who want a simple, 2-for-1 device. It's decent as a laptop when you want to get some writing done or just browse the Web, and it can be useful as a tablet when you want to flick through some photos or read a book. Furthermore, you can stand it up in tent mode (or with the keyboard sitting backwards) if you want to watch a movie while at your desk or in bed.