A sub-2kg, 14in laptop with lots of features, good looks and solid performance The Inspiron 14z is a good choice for anyone who wants good speed and lots of features in a relatively small and comfortable-to-use chassis. It weighs only 1.95kg, it's 25mm thick and it feels quite well made overall. It's a good model for students and home users to consider and you can try before you buy at JB Hi-Fi.

Dell's thin-and-powerful laptop range now includes the sub-2kg Inspiron 14z. It's a neat little 14in laptop with a slim body (it's around 25mm thick overall), yet it doesn't make compromises when it comes to features: it ships with a full-voltage Intel Core i3 CPU, has USB 3.0, and it even carries a built-in DVD burner. We think it's a great model for students and home users who want a regular laptop that's more mobile than a typical 15-incher. It's one of the few Dell models you'll be able to try before you buy, too, as it will be offered through retailer JB Hi-Fi, initially in black, then in red.

Dell first introduced its thin-and-powerful range to Australians in June with the 15.6in XPS 15z. That laptop had plenty of nice features and good performance, but its keyboard was a major let-down. This time around, the 14in Inspiron 14z is smaller, yet still well featured and, most importantly, it has a good keyboard with soft and responsive keys. The only key that feels off is the backspace key, as it rattles a lot.

The touchpad is a good size (80x44mm) and it feels smooth and responsive. It supports two-finger scrolling and three-finger flicks. The left- and right-click buttons didn't thrill us though — they felt too shallow and almost impossible to press. Dell has some wonderfully soft touchpad keys in its laptop arsenal, and we think it should have used them on this model, too.

Three shortcut buttons sit above the keyboard. The left-most button allows you to quickly launch the Mobility Centre (which allows you to control the screen brightness, Wi-Fi and enable facial recognition among other things; the middle button launches the Dell Support Centre, which allows you to get updated drivers, check for problems and seek online tech support; the button on the far right can be customised to do things such as 'blank' the screen, launch a Web site or launch your favourite program. We're fans of these buttons as they actually do allow for quick access to some useful functions.

The performance of the Inspiron 14z felt swift for the most part and we didn't notice much sluggishness when using it to browse the Web and work in an office suite. However, we did have to nip some pre-installed software in the bud: the laptop is loaded with a 'stage' interface that resides on your desktop background as soon as you boot, which can actually be quite handy, but we got rid of it. It also comes with Nero 10, which has various components that run in the background, and it's the default program for media files. It was the cause of some non-responsiveness when we first started using the 14z and the laptop ran much better when we killed this software. 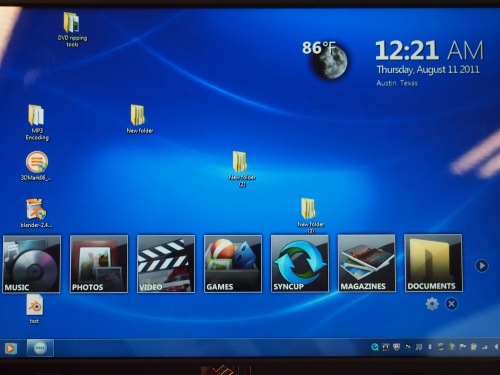 There is plenty of pre-installed software on the 14z, including the 'stage' software you can see on the desktop in this screenshot. We felt that it just got in our way.

In our performance test, the 14z was standard. It produced similar results to the other Intel Core i3-2330M-equipped laptop we've seen, Sony's VAIO E Series, and it's a laptop that can be used for office work and multimedia tasks. You can even do video editing and file transcoding if you want. Along with 4GB of DDR3 SDRAM, integrated Intel HD 3000 graphics and a 5400rpm, 320GB hard drive, the 14z recorded a time of 55sec in our Blender 3D rendering test, 1min 8sec in our iTunes MP3 encoding test and 1hr 12min in our DVD transcoding test. It recorded a very good score of 4260 in 3Dmark06, which is higher than the Sony's score, but its hard drive transfer rate of 24.09 megabytes per second was a smidgin too slow.

As for battery life, the unit's 44 Watt-hour battery lasted 3hr 4min in our rundown test, in which we disable power management, enable Wi-Fi, maximise screen brightness and loop an Xvid-encoded video.

Around the edges of the Insprion's relatively thin chassis, you'll find a built-in DVD burner, two USB 3.0 ports, HDMI, Gigabit Ethernet, Mini DisplayPort, a USB 2.0 port and a headphone port. It's a good array of features and we like the little drop-down covers on all the ports, which give the unit a very streamlined look. That said, we're not sure how they'll hold up with regular opening and closing — the left cover in particular looked like it already couldn't close properly after a day of testing. 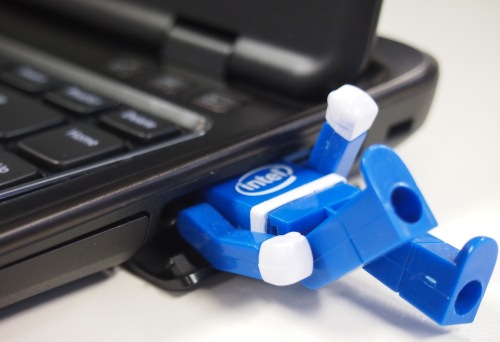 The overall design of the Inspiron 14z is easy on the eyes. It's not a completely new design — we've seen it before in the Dell Inspiron 15R. It has a chrome trim around the keyboard and its lid and palm rest are made of aluminium while its hinges are metal and its base is hard plastic. Its base feels well constructed and doesn't rattle or creak if you manhandle it. However, we did notice some clicking in the bezel around the screen, although we couldn't always replicate it. Nevertheless, we think it's a strong enough laptop for the market segment it represents.

It gets a little warm after prolonged lap usage, as the air vents at the bottom get blocked, but it didn't feel too bad. It got lukewarm when running a full processing load while sitting on a desk. It has a fan that kicks in during full processing loads and it will get your attention in a quiet room, but we didn't think it was overly loud.

The screen is bright and has a native resolution of 1366x768. It does a good job of displaying photos and movies, but because it's glossy it doesn't fair too well outdoors or in office environments — reflections will be noticeable. Like most laptop screens, its vertical viewing angles are also very shallow.

At the front of the unit there are two speakers, which we found them to be surprisingly enjoyable to listen to. They were fine for listening to music and watching movies, but because they are so small they can't reproduce deep base tones. They will get muffled if you use the 14z on your lap, but they'll sound clear when the laptop is left on a hard, flat surface.

Taking into consideration all of the Inspiron 14z's features, its more than decent performance, its relatively small body (and also a smaller than usual power adapter) and its sub-2kg weight, it's a laptop that is very enticing. It's no MacBook Air, but we'd recommend it to anyone after a small and mobile laptop for everyday office, Web and multimedia tasks.