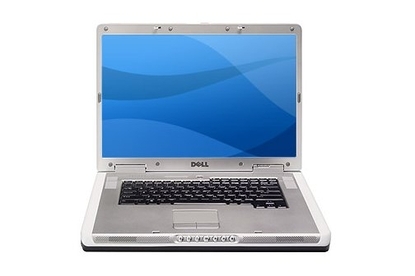 Although Dell's build quality is once again a winner, the Inspiron 9400 is lacking in other areas, mainly looks and graphics.

The design of the Inspiron 9400 is almost exactly the same as the 9200 and 9300, so the chassis is starting to look a bit dated. It's a sturdy desktop replacement, but compared with the styling of the Inspiron XPS, it leaves a little to be desired.

The 9400 is a world ahead of the 9300 as far as specifications are concerned, though. Gone is the Pentium M processor, replaced by the dual-core T2500 chip, seriously increasing the 9400's power and helping it to a WorldBench 5 score of 94. We've seen quicker overall results, but in our multitasking tests the Dell was second to none.

Another difference between the 9400 and its predecessors is the choice of operating system - XP Home has been replaced by XP Media Center 2005 Edition, indicating a greater emphasis on making the 9400 an all-round entertainment centre. The screen is good, giving a sharp, colourful image, but we'd have liked to see a higher resolution than 1,440x900.

In terms of graphics, the 9400 really falls down - that onboard Intel processor simply isn't up to the standard established by ATI and nVidia. The frame rates we got in our Doom3 and Halo tests weren't very good at all. Believe us when we say that this laptop isn't for gaming. We suspect that a better graphics chip would have boosted the Inspiron's WorldBench 5 result.

Other than this disappointment, the 9400 is a decent model, with plenty of space on the hard drive, a decent DVD writer and good connectivity options, both wired and wireless. There's a newer version of Microsoft Works than the one Dell provides with this model, though, and the warranty isn't the best on offer. The build quality of the Dell is beyond reproach, but it isn't exactly a looker and there are plenty of better deals available.