A small yet potent business desktop with plenty of useful features. 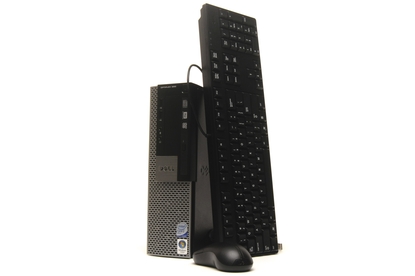 There's no doubt the Dell Optiplex 960 is quick, and that its small size and quiet operation make it an ideal unit for a cubicle environment, but it does cost a lot of money.

Business users who want a small PC that's well-armed for running the latest office programs will appreciate the Dell Optiplex 960. It won't take up more than a 33cm square on a desk, it will run quietly and it has the latest in hard drive and monitor connections. However, it's not cheap; at $2797, you better make sure that you'll get every ounce of power out of this unit for the duration of its lifespan.

The Dell Optiplex 960 is based on Intel vPro technology, which assists with BIOS-level remote management tasks for administrators. It has a 2.67GHz Intel Core 2 Q9600 CPU and 2GB of RAM. Windows Vista Business is preinstalled on the unit, but an option for downgrading to Windows XP is available. You also get a 160GB SATA hard drive and integrated Intel graphics, and there is a slimline DVD burner installed, too. The only thing this PC is missing is a media card reader.

In our WorldBench 6 benchmark suite the Dell Optiplex 960 scored 113, which is quick. It was helped along by its four CPU cores, which also managed to produce fast results in our MP3 encoding and 3D rendering tests. Using iTunes, the Dell Optiplex 960 encoded 53min worth of WAV files to 192Kbps MP3s in 59sec; meanwhile, in Blender 3D it completed a four-thread workload in 35sec. All these scores are indicative of a very quick system, and its responsiveness while using it, whether it was opening operating system menus or loading applications, was good.

It's not a system that is suited to rendering 3D graphics in real time, as its integrated Intel chip scored only 1021 in 3DMark06, but it's not designed for that sort of thing. Grab yourself a Dell Optiplex workstation with an NVIDIA Quadro graphics card if you want a machine for professional design work.

Incidentally, the Dell Optiplex 960 will be available with a Quad DisplayPort card in April, which will allow it to drive up to four monitors. This will make it ideal for bankers, stock brokers and accountants who can make use of multiple screens. Currently, there is only one DisplayPort available.

The Dell Optiplex 960 is approximately 33cm deep, 29.5cm wide and 9cm high, and it can be placed either flat on a desk with a monitor on top, or on its side like a tower. It has a tool-less side panel that comes off to reveal a packed interior that's a little different to the norm. The CPU is located towards the front of the system and the hard drive sits behind it in a plastic holder. The drive can be removed without the aid of tools, and the optical drive can also be replaced quickly, but cables obscure the four DIMM slots; this means installing RAM modules will be a little difficult.

It will consume approximately 1.7W of power while it's switched off and plugged in to an outlet, and less than 50W while it's used to browse the Web and create office documents. When all its CPU cores are at their full capacity, up to 90W will be consumed. So all up, it's a very efficient system considering how quick it is.

Dell has used some recycled materials to construct the plastics used in the chassis, and this includes the front panel and internal shroud and hard drive holder, but the chassis itself is made of sturdy steel. The rear panel has an array of old and new ports, including PS/2, D-Sub, parallel and serial ports, as well as USB 2.0, Gigabit Ethernet, DisplayPort and e-SATA. The front of the machine has two USB 2.0 ports, as well as microphone and headphone jacks.

There's no doubt the Optiplex 960 is quick, and its small size makes it an ideal unit for a cubicle environment, but it does cost a lot of money. It should be considered only if you require the small size, remote management facilities and speed that are on offer. A 3-year on-site warranty is included in the price.