Dell's Precision M2400 Mobile Workstation is a 14.1in powerhouse that's aimed at users who want to run demanding design applications. We like its build quality and speed, but wish that it came with a few more features given it costs over $3000.

Dell's Precision M2400 Mobile Workstation is a 14.1in notebook built for users who desire a powerful yet portable computer on which to run graphic design and engineering applications. It looks big and menacing at first glance, but it's not actually as heavy as it looks.

At around 2.4kg, the Precision M2400 doesn't weigh a lot for a 14.1in laptop that has a built-in optical drive, a 6-cell battery and a full set of ports. Along the edges you get four USB 2.0 ports (one doubles as eSATA); a DisplayPort and a VGA port; a mini-FireWire port; an SD card reader; ExpressCard/54 and smart card slots; Gigabit Ethernet; a dial-up modem port; and microphone and headphone ports. You also get a dual-band 802.11n wireless adapter (Intel WiFi Link 5300) and a webcam.

The Dell Precision M2400's relative lightness is due to the magnesium alloy chassis, which also makes this notebook very strong. Its lid is ribbed and you can press down on it forcefully without large puddles forming on the LCD screen; the case has steel hinges that hold the LED-backlit 14.1in screen exactly in place. You can pick up the notebook from either corner and it won't buckle under the pressure, even though the right side is not completely solid due to the ExpressCard slot and built-in DVD burner. The screen isn't glossy and is easy to view in well-lit environments. It has a latch to secure it to the base, and the notebook is well balanced (you can undo the latch and lift the lid with one hand, for example). 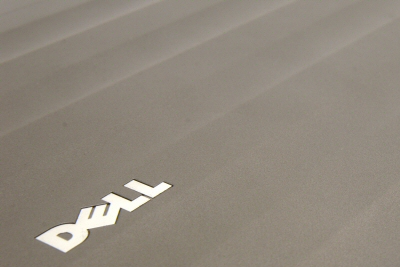 The ribbed lid is strong and gives the mobile workstation an interesting look. 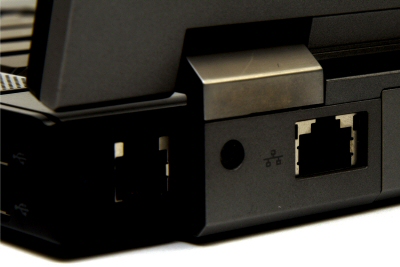 The hinges are steel and hold the lid perfectly in position.

We like the way Dell has included both a touchpad and an "eraser head" device for moving the mouse pointer; both are responsive, but the buttons for the touchpad are softer and more comfortable to use. The keyboard is not as good as we were hoping. The keys make a little too much noise when they are hit and they feel a little too resistive, which can be tiring when you type long documents. It's a backlit keyboard and you can set the lighting manually with a key combination, or you can use Dell's ControlPoint Display Manager to make it illuminate only when you are in a dark environment.

We like the Precision's touchpad more than the 'eraser head'. It will recognise gestures, such as pinching to zoom in on an image.

The automatic keyboard backlighting relies on an ambient light sensor on the bottom of the screen's bezel; this can also adjust the brightness of the screen. It is highly sensitive and as a result the notebook reacts swiftly to changes in lighting conditions. For example, while working near a window during the day, adjusting the angle of the notebook to face slightly away from the window caused the screen to darken a little. In fact, the screen brightness changed every time the wind picked up and blew the window's curtain, which got very annoying. At night the ambient light sensor was ineffective, with the screen remaining very bright; we had to adjust brightness manually. You can enable the ambient light sensor through the Dell Display Manager software or by using a keyboard shortcut.

You can also use a shortcut to launch the ControlPoint application, and there are physical buttons for changing the volume and toggling the wireless adapter. You can use ControlPoint to enable power management and security features, and also to manage your network connections. The notebook we tested came with a smart card reader and you can order a model with a fingerprint reader as well for an extra $43.

When you use the Precision M2400 for a while, you will notice some heat on the palm rests, but it won't be uncomfortable; if you use it on your lap, you will feel the warmth of the base on your thighs. It's not bad, but you won't want to do it on hot days. A cooling fan, which draws air from a vent on the bottom of the base and pushes it through the heat sink and vent on the left side of the base, might be blocked when you use the notebook on your lap. It's best to rest this notebook on a flat, hard surface whenever possible.

In the engine room, the Precision M2400 has an Intel Core 2 Duo T9400 CPU, which runs at 2.53GHz. There is 2GB of RAM (it can support up to 8GB), a 250GB, 7200rpm hard drive (Samsung HM251JJ) and an NVIDIA Quadro FX 370M graphics adapter. This configuration propelled the Precision M2400 to 99 in our WorldBench 6 benchmark. This isn't as fast as what an Intel Core i7-based notebook, such as the ASUS G60J, can achieve, but compared to other Core 2 Duo T9400-equipped notebooks, such as the ASUS U80V, it's a fast result. The Precision M2400's times of 1min 07sec and 1min 10sec in the iTunes MP3 encoding and Blender 3D benchmarks are also slightly faster than the norm.

Hard disk performance is swift thanks to the 7200rpm spin speed, which gives the Precision M2400 almost desktop-like transfer speeds. It recorded 31.17 megabytes per second in our transfer tests — anything over 30MBps for notebook is a fantastic result. The workstation can also be configured with a solid-state drive for increased speed, or set up in a RAID 1 configuration when using the optional dock.

The 256MB NVIDIA Quadro FX 370M graphics adapter is an entry-level professional-grade card that's useful for CAD applications rather than gaming. This was shown in the 3DMark06 test, in which it recorded 1667. For applications such as AutoCAD, the Quadro will speed up the viewing of 3D models so that the system's CPU doesn't have to do all the grunt work. The screen's resolution of 1440x900 pixels is high for a 14.1in display; when you're not using the notebook for design applications, you can comfortably line up two office applications (such as a word processor and a Web browser) side by side.

The notebook's battery has an indicator on it that lets you see how much life it has left without needing to boot Windows. Away from a power outlet, the Precision M2400's battery has an acceptable lifespan. It lasted 2hr 06min in our battery rundown test, during which we disable power management, maximise the screen brightness and enable the wireless radio then loop a DVD. When we used the power management utility that's part of the Dell ControlPoint software to enable the Power Saver scheme, the same rundown test lasted 3hr 5min. In this scheme the ambient light sensor is disabled and the brightness of the screen lowered. The CPU speed is also reduced by approximately 1GHz.

The cost of our sample Precision M2400 is hard to calculate as Dell does not offer it with the T9400 (2.53GHz, 1066MHz bus, 6MB cache) CPU, but instead with a T9900 (3.06GHz, 1066MHz bus, 6MB cache), P8800 (2.66GHz, 1066MHz bus, 3MB cache) or P8700 (2.53GHz, 1066MHz, 3MB cache) CPU. Substituting the T9900 in our configuration gives us a price of $3251.20. For that price, we'd like to have more hard drive capacity, 4GB of RAM and Bluetooth as well as a fingerprint reader installed by default. But it's still competitive price for a high-end laptop. The build quality and features of the Precision M2400 are first class, and its speed is undeniable. If you make your living with design programs that will benefit from the Quadro FX 370M, and want the freedom to work with those programs while away from the office, then this laptop needs to be considered.