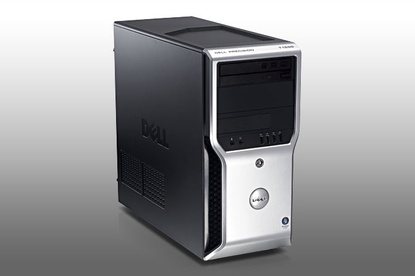 The Dell Precision T1500 is an entry-level workstation that's no slouch. It has AutoCAD certification and is available in a wide range of system configuration options. Our Intel Core i7-870-based system produced some great performance figures. There is also plenty of internal room for expansion.

The Dell Precision T1500 is an Intel Core i7-based workstation aimed at professionals who use computer-aided design programs. You can get the T1500 in all sorts of configurations, ranging from an Intel Core i3-based system to a Core i7 one. Our review model came with an Intel Core i7-870 CPU, 4GB of DDR3 SDRAM, an NVIDIA Quadro FX 580 graphics card and two 320GB hard drives in a RAID 0 array.

For all its gargantuan number-crunching power, the T1500 workstation is actually quite a small and light PC that uses a mini-tower case rather than a larger mid-tower. The Precision T1500's styling is similar to the Precision T3500's, with a two-tone silver and black colour scheme. It's attractive in a businesslike way. Two front-facing 5.25in drive bays can house a pair of optical disk drives — our test system used a single DVD-RW drive. We liked the four USB 2.0 ports on the front of the workstation, which are easily accessible and more than typical desktop cases offer — if you're going to be connecting and unplugging multiple external hard drives or flash drives frequently, two ports is simply not enough.

Inside the case there's a surprising amount of space. There are three 3.5in hard drive bays, two of which are angled vertically. The system's memory slots are easy to access for expansion or replacement, and there are two free PCI slots and one free PCI Express (PCI-E) slot for adding internal cards. The free PCI-E slot is of the x1 variety though, so you won't be able to fit another graphics card, for example.

The rear of the Dell Precision T1500 workstation is an unexciting place. It has six USB 2.0 ports, two PS/2 connectors (for legacy keyboards and mice), a Gigabit Ethernet connector, a serial port and a pair of 3.5mm audio jacks. The NVIDIA Quadro FX 580 graphics card in our system had a DVI port and two DisplayLink ports, which can be used to drive monitor resolutions up to 2560x1600.

The Dell Precision T1500 packs a very impressive amount of computing power into its mini-tower case. When it comes to raw number-crunching, the Intel Core i7-870 is one of the most powerful processors available before you step into Intel Xeon territory. In Blender 3D, the T1500 took a mere 26 seconds to render our 3D test image, resoundingly beating the older configuration of the Dell Precision T3500, which we tested a year ago. The iTunes test was also very fast; the PC encoded 53min of WAV audio to 192Kbps MP3s in only 45sec. So don't be fooled by the T1500's diminutive size — it's got plenty of power.

Our test system had 4GB of DDR3 RAM, but as this is a workstation for computer-aided design, it would benefit from much more. Thankfully, you can install up to 16GB of RAM.

We compared the results of the Dell Precision T1500 to some high-end consumer systems to see how it performed. Our test system had Windows Vista Business installed, but Dell does also offer Windows 7 with a downgrade to Windows XP.