Believe it or not, Dell's latest 24-inch IPS monitor is actually good value for money 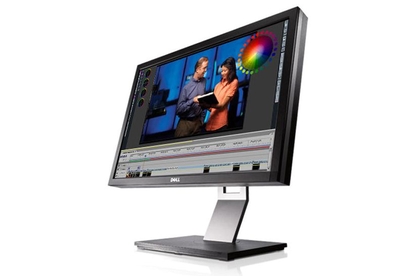 If you're looking for a monitor for graphics-intensive work like photo editing and CAD, the Dell UltraSharp U2410 is your best port of call unless you want to spend a lot more.

The Dell UltraSharp U2410 is a 24in LCD monitor with an accurate, sharp panel and a wide range of calibration options. It's a good value option for image-intensive work like graphics editing and photography that relies on accurate colours. It has a low price compared to its competition.

The UltraSharp U2410 LCD monitor inherits some design cues from older Dell displays (the well-regarded Dell UltraSharp 2408WFP and the Dell UltraSharp 2405FPW), including a sharp rectangular design and thin, modern-looking bezel. Near the power button on the lower right corner are five touch-sensitive buttons to operate the on-screen display.

Two USB ports and an xD/SD/MS/MMC card slot are integrated into the rear of the bezel. Unlike previous models there's no CompactFlash support. This format is now mainly used in high-end digital SLR cameras, but we'd expect SLR owners to be prospective buyers of monitors like the UltraSharp U2410, so it's definitely a negative. The monitor has two DVI ports (one of which we used for testing), as well as HDMI, VGA, DisplayPort, component and composite ports.

The Dell UltraSharp U2410's menu system is well laid out and easy to navigate. There's a massive range of adjustability: simple brightness and contrast adjustments, a series of presets including Adobe RGB and sRGB, and a detailed custom colour mode. The level of customisation makes the Dell UltraSharp U2410 good for accurate colour work. The menu also features picture-in-picture options so you can use two inputs simultaneously — we tried this out with the VGA output of a Dell Inspiron Mini 9 netbook and found it convenient for multitasking.

When it comes to specifications, the Dell Ultrasharp U2410 LCD monitor doesn't disappoint. The 1920x1200 resolution is on par with other 24in panels, and the screen's IPS technology means it has a near-perfect 178 degree viewing angle. Its impressive credentials are rounded out by 12-bit internal processing, support for 96 per cent of the Adobe RGB colour gamut and 100 per cent of the sRGB colour gamut.

The screen's 6ms response time is on par with mid-range TN panels, so it can display video and games without any ghosting or unwanted blurring.

The colour and picture of the Dell UltraSharp U2410 LCD monitor are fantastic. We used the sRGB preset for most of our testing; out of the settings we tested it produced the most pleasing and accurate colours. This monitor has great whites that are vibrant and clear, but people used to less in-your-face screens might take time to adjust. We ran the screen through a series of DisplayMate tests, during which the Dell UltraSharp U2410 was capable of displaying every gradient clearly, with no aberrant scaling or geometric problems. Sharpness was better than many other 24in screens we've seen, with text crisply rendered.

This screen supports 1920x1080 24p playback — this displays Blu-ray and movie footage at the frame rate it was intended played at, removing any jitter and uneven motion. If you've got a Sony PlayStation 3, the Dell UltraSharp U2410 would make a good choice — for PC use, gaming and movie watching.