An ultraportable 12in Dell laptop aimed at business users 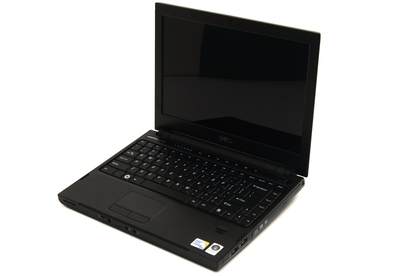 If you want a small laptop but yearn for more performance than a netbook can provide, the Dell Vostro 1220 is an excellent option. It's a fully featured 12.1in laptop with good speed and battery life. Its build quality isn't great, but the price is right.

For roughly double the price of a 10in netbook you can get yourself a slightly bigger (12.1in) laptop that runs faster, is much easier to use and has very good battery life. That laptop is the Dell Vostro 1220. It's an affordable ultraportable notebook for anyone who wants a regular laptop with a small form factor at a good price.

The Dell Vostro 1220 notebook includes an optical drive in its 29.5x23.5x4.5cm chassis, an ExpressCard/34 slot and even a dial-up modem. It's aimed at business users, but its price (which starts at $1149 and goes up to $1499 depending on the operating system, CPU and RAM configuration you choose) means it's within reach of anyone who wants something small that can run programs faster than a netbook. It ships with Windows Vista Business edition, but it also comes with Windows 7 upgrade rights.

Our test unit came with an Intel Core 2 Duo T6570 dual-core CPU that ran at 2.1GHz, 2GB of DDR2 SDRAM, a 160GB hard drive and Intel integrated graphics. This configuration produced fast results in our Blender and iTunes tests, recording times of 1min 23sec and 1min 25sec, respectively. This is approximately seven times faster than the Dell Inspiron Mini 12 netbook, which has a 1.6GHz Intel Atom CPU, 1GB of RAM and (at the time of writing) a price of $849. In WorldBench 6, the Vostro 1220 notebook recorded a score of 78, which means it will have no trouble dealing with everyday office applications, multitasking and more. You can perform media encoding, edit photos (although the screen is a little small for that sort of thing) and even rip your DVDs to the hard drive so that you can watch them while you travel. Programs that require real-time 3D rendering though, such as games, won't run efficiently: the Vostro 1220 only has integrated Intel GMA X4500MHD graphics. But apart from that, you can efficiently use the Vostro 1220 for just about anything.

If you end up using it for media encoding or graphics work then you'll want to add an external hard drive at some point as the Western Digital WD1600BEVT hard drive only offers 160GB of storage. It spins at 5400rpm and performed well in our tests, recording a transfer rate 24.09 megabytes per second — approximately 4MB faster than we were expecting.

It's important to note that by the Vostro 1220 will ship with an Intel Core 2 Duo T6670 CPU instead of the T6570 that was in our test unit, which increases the speed of the laptop to 2.2GHz. The CPU in the Vostro 1220 is not a low-voltage model, but it is still relatively power efficient (it has a rating of 35W). The notebook's 4-cell battery lasted 3hr 12min in our video rundown test, in which we loop video files while the screen is at maximum brightness and the wireless radio is enabled (a 6-cell battery is also available).

The 4-cell battery makes the Vostro 1220 a little heavy for such a small laptop, as it weighs in at 1.9kg. But the extra uptime while you are away from an outlet is worth it.

But it's not all good news for this little laptop. Its build quality is a little shoddy, which is something to be expected given the price. The screen suffers a visible 'puddle' effect on the left part of the screen every time you move it. The laptop's keyboard bounces slightly when you type, which is uncomfortable, and the chassis around the built-in DVD burner is not rigid enough. It moves if you happen to pick up the laptop from the optical drive's side, and there is a clicking noise as the chassis and the optical drive come into contact.

Another thing that annoyed us was the factory setting for Windows updates: the notebook has been set to download and install them without user intervention by default. We were unlucky enough to have the Vostro 1220 reboot, without so much as a warning, while in the middle of our work! That's not a good thing for a business laptop.

We also don't like the 'drag lock' feature, which seems to be enabled on all Dell notebooks and makes the cursor sticky every time you double click. It makes Web browsing and drag-and-drop operations a pain, but it can be disabled through Dell's touchpad utility in the System Notification area of the Taskbar.

These quibbles aside, the Vostro 1220 is definitely worth your time and money if you're after a portable laptop that offers good value. It has a decent screen with a 1280x800 resolution, dual-band 802.11n wireless networking, three USB 2.0 ports, Gigabit Ethernet, an SD card reader, a fingerprint reader, a D-Sub port, a 56Kbps dial-up fax/modem, and an ExpressCard/34 slot.