This Dell Vostro PC has good specifications for business users, but its 3D performance is not impressive 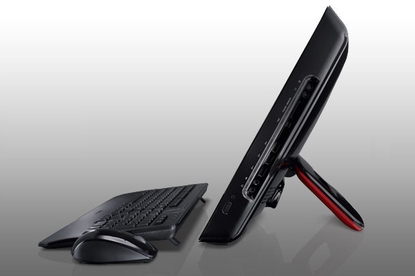 Dell's Vostro 320 aims to bring an all-in-one PC design to the business realm, offering a steamlined look and feel, while still offering good computing power, for general business tasks. It can run business applications with ease, and it achieved reasonable performance benchmark scores in our tests. It doesn't have any major flaws, but we would have liked the wireless receiver for the keyboard and mouse to be built into the Dell Vostro 320's, not occupy a USB port.

The Dell Vostro 320 is an all-in-one PC aimed at the business market. Our test PC had a dual-core Pentium Core 2 Duo E7400 processor running at 2.8GHz, 2GB of DDR2 memory, a 160GB hard drive and integrated Intel G41 graphics running its 19in 1440x900 LCD screen — but it can be ordered in a range of specifications. Its performance makes it a good choice for general Web browsing and productivity applications, but if your business needs include 3D graphics processing then you’ll need to look elsewhere for more PC power.

The Dell Vostro 320 is a simple, business-like interpretation of an all-in-one PC — and it looks very similar to the equally minimalist Dell Inspiron One 19. A satin, black bezel of approximately 3cm surrounds the entire screen, although the internal speakers at the base extend the lower bezel to approximately 10cm. A wireless keyboard and mouse are bundled with the Dell Vostro 320 all-in-one PC, and they are finished in the same semi-gloss coating. Annoyingly, the wireless receiver for the keyboard and mouse must be plugged into an external USB port rather than being built into the Dell Vostro 320's body. An integrated stand at the rear of the PC's chassis allows for the screen to sit almost vertically, with a maximum tilt angle of around forty degrees — making it easy to adjust for a range of desk heights and viewing angles.

The input and output ports of the Dell Vostro 320 all-in-one PC are located at the rear of the device and on the right fascia of the screen. Power, USB, Ethernet connections, as well as PS/2 and legacy serial and parallel ports, can also be found at the rear of the PC. The ports are accessed through a hole in the Dell Vostro 320's stand, which also is useful to tidy your cables. The side mounted ports include additional USB sockets (the Dell Vostro 320 has a total of six), headphone/microphone jacks, as well as a multi-purpose memory card reader. There is an easily accessible FireWire port located on the side of the PC.

Our test PC had a mid-range Intel Pentium Core 2 Duo processor, the 2.8GHz-clocked E7400. This is slightly different to the units that can be purchased on Dell's Web site, which can be optioned with a 2.93GHz E7500 or 2.7GHz E5300 CPU as well as having 4GB of RAM and a larger 500GB hard drive. With these specifications you can expect slightly better all-round performance from the Dell Vostro 320 all-in-one PC.

The Dell Vostro 320 all-in-one PC has enough power to run business applications such as word processors, Web browsers or other productivity software. The dual-core processor means users can multitask without incurring a performance hit. If your business needs 3D rendering capabilities you should look to purchase a more powerful machine. Otherwise, the Dell Vostro 320 all-in-one PC is a good upgrade if you want to streamline your desktop by dumping your bulky PC desktop with a separate monitor setup.